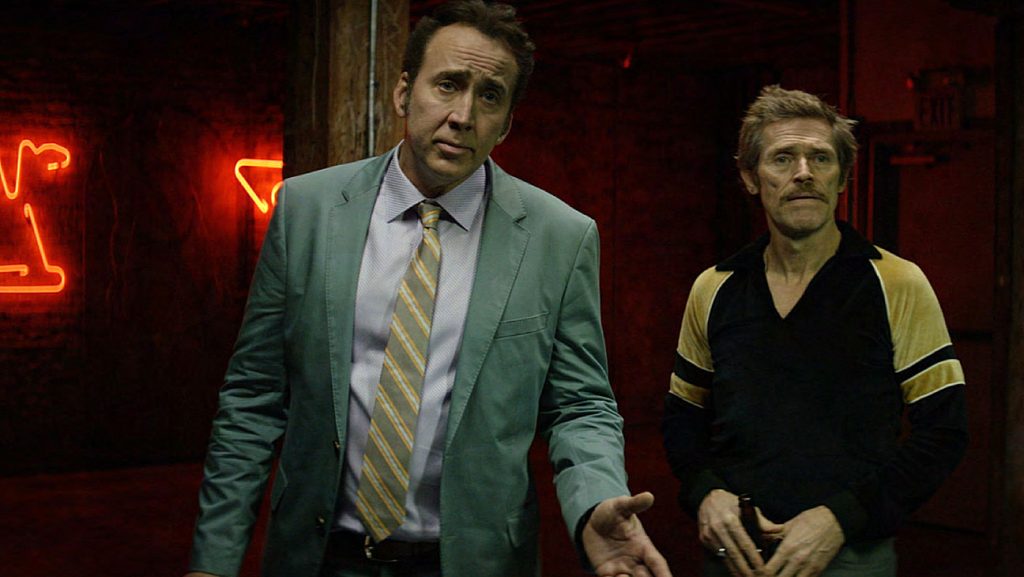 Paul Schrader goes for the jugular with his latest film Dog Eat Dog. The cult filmmaker who gave us classics like Cat People, American Gigolo and Hardcore – not to mention writing Raging Bull, Taxi Driver and The Yakuza – has seen his reputation change in recent years thanks to a few curious projects. Despite delivering a clear winner with vastly underrated Bret Easton Ellis penned The Canyons, Schrader was involved in controversial release Dying of the Light – a CIA thriller which was apparently hijacked and butchered by the film’s producers, leaving no semblance of Schrader’s original vision. It’s therefore understandable that Schrader goes it alone for Dog Eat Dog, an indie crime thriller which sees him re-team with regular collaborators Willem Dafoe and Nicolas Cage.

Opening with a highly-charged debate on gun culture, Schrader pans out from a TV to reveal Willem Dafoe’s drugged-up con lost in the lights and colours emitted from the TV set. Bathed in an insipid pink light and revealing a warped suburbia, it’s clear that Schrader plans on revelling on the these two concepts of ultra-violence and insipid-stylisation combined. Dog Eat Dog does not disappoint in this respect, it is a combination of stylised visuals, grisly-violence, off-kilter humour and wild-eyed energy – elements which are showcased in that very opening scene. When Dafoe’s Mad Dog’s on/off partner and her obnoxious daughter return, Schrader lifts any potential cap he may have had on the film’s garish violence with Mad Dog slaughtering the pair in his a drug-fuelled high. Of course, Dog Eat Dog is drenched in camp with the bloodbath being preceded by an argument in which Dafoe growls “I didn’t hear nothing about no cupcakes!” to his partner’s petulant shrieking cherub. Dafoe really is the stand out here, delivering a performing that’s operating on a level of madness usually delivered by his co-star, Cage, Mad Dog is grubby, deranged and humorously needy.

This highly-charged style reveals Schrader as a filmmaker keen to show he is here to show old pro’s can still deliver vitality in the dog eat dog film industry – and those that have seen the sex-packed, violent The Canyons, will be well aware of this. Occasionally this energy can dip as screenwriter Matthew Wilder’s narrative progresses and Dog Eat Dog gets wrapped up in needlessly convoluted plot dynamics and mob drama conventionality – dropping its previous aesthetics trumps ideology approach. Dog Eat Dog shines when its being loud, dumb and unrelentingly nasty – something there is a need for in this cinematic landscape soaked in PC ideology and emotional manipulation.

Schrader’s Dog Eat Dog lives in a world drenched in a grisly black humour filled with oddball cons, vacuous hookers and dingy neon strip clubs. Watching his cast of unpleasant, sub-human cons drift through this world and their struggle to adapt their former prison/criminal underworld behaviour to the outside world makes for a thoroughly engaging concept. Cage shines as the Humphrey Bogart obsessed ‘leader’ of the trio delivering a turn which is unexpectedly understated given the highly-charged aesthetic of the film.

Wilder’s narrative feels entirely by the numbers as it essentially follows these career criminals trying to score one last big job, but Schrader redeems this thanks to the film’s fast-paced, energetic and highly-stylised aesthetics. Further pleasures come from Dafoe’s unhinged, and Cage’s oddly restrained performances.