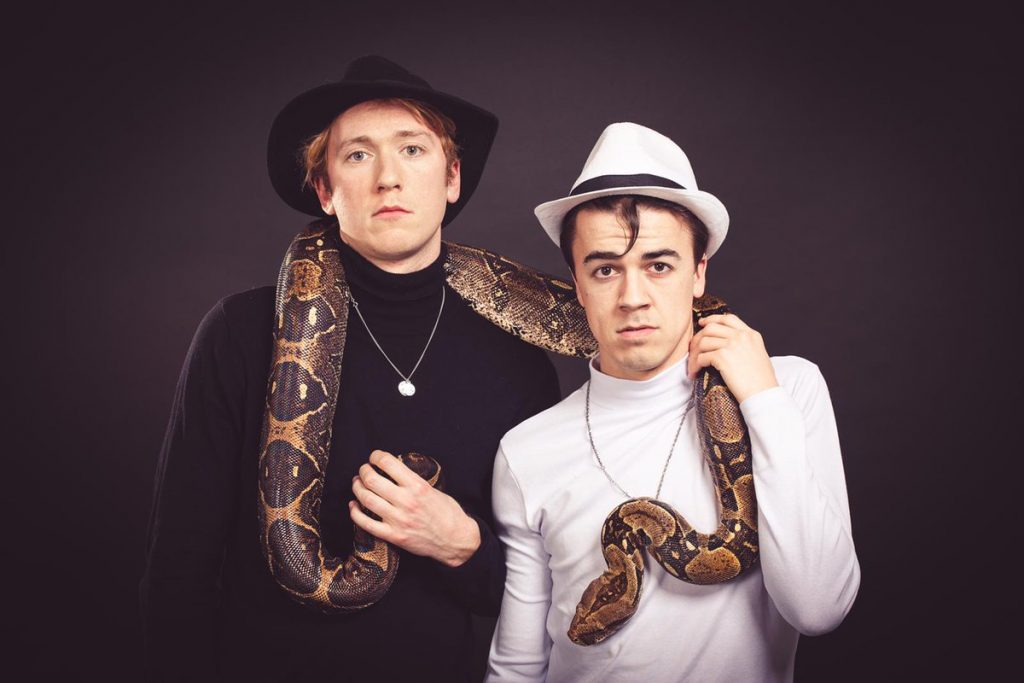 Rating: ★★★
Venue: Pleasance Courtyard – Baby Grand
Tickets
Will Hislop and Barney Fishwick are Lars and Ulrich – members of Eurodance duo Fjörd. In Giants Are Fjörd playing at the 2019 Edinburgh Festival Fringe, the pair present comic songs and humorous exchanges – yet Giants Are Fjörd falls at the final hurdle in a disappointing conclusion.

Fjörd have reunited to record a live album at “Scotland’s Glastonbury” – the Edinburgh Festival Fringe. The former Eurovision runners-up have put their personal issues aside and run through their previous hits.

Lars and Ulrich are excellent comic creations. They make uncomfortable turns of phrases (Judas Iscariot becomes “Look who’s riding Judas’s chariot”, hair of the dog becomes “I’m having dog hair.”) They have an amusingly serious conviction in their reminiscence of acts like Basshunter and Eiffel 65 as icons, whilst the faux-seriousness in talking about their fractured relationship is deeply amusing. Turning on an audience member as their ‘Number 1 Crazy Fan’ Christian is quick-thinking comedy gold. Hislop and Fishwick are impressive improvisational comics with audience members leaving (purely due to the show starting twenty minutes late, I presume) and Hislop accidentally hitting his head on a disco ball, becoming big comic moments.

For a show centred on two Eurovision stars performing Eurodance – none of the comedy songs really have a Eurodance sound. They are, however, very well written and amusing. Romantic ballad Genie Genie’s narrative is a rollercoaster of emotions, whilst an acoustic track about the forgotten Eurodance stars is delivered with heartfelt comic conviction. An anecdote about being asked to write the Harry Potter musical – without actually reading the Harry Potter books – leads to a wonderfully skewed interpretation of the JK Rowling novels, complete with hilarious Nordic accents. Yet the piece de resistance is set to be their closing Eurodance bangers delivered in a science-fiction Eurodance musical.

Unfortunately, the performance we review does not get that far. Technical issues, the result of a microphone being dropped at the start of the musical number results in the performers unceremoniously abandoning the stage as the Hi-NRG backing track blasts. It’s unfortunate that a show that was building up to a high comic crescendo ends on a whimper. Whilst this surely is not the norm for the performers, we can only review the show in which we saw.