Whilst we are still in list-making mode, we’ve crafted this little feature of ten underrated LGBT related films that are well worth your time. Of course we could spend months compiling lists of films that could be classified as gay-interest, but these releases mainly focus on gay characters or people.


We’ve copied in links where you can stream or purchase these modern classics.


This South African drama follows a closeted middle-aged father who becomes obsessed with his son’s college friend. Hermanus’s direction is unrelentingly tense – especially when exploring the devastating and dark route that the film goes down. Exceptional performances packed with subtle emotion from Deon Lotz and Charlie Keegan help ensure that this is a watch that stays with you. 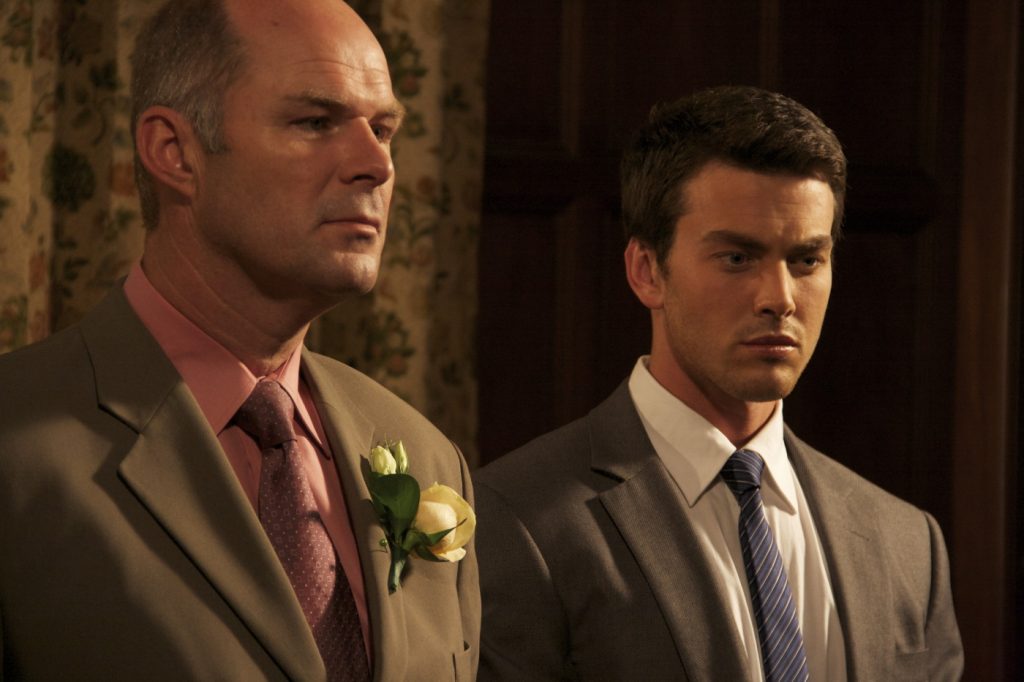 
The setting of 1980s Tel Aviv makes a unique canvas for this gay-themed drama to unfold upon. Snails in the Rain follows a gorgeous linguistic student Boaz (Yoav Reuveni) who begins to receive male-written love letters that see him questioning his sexual identity. Mozer’s tale veers into an enthralling look at sexuality, packed with a Hitchcockian edge and oozing sensuality thanks to the aesthetically pleasing Reuveni (below). 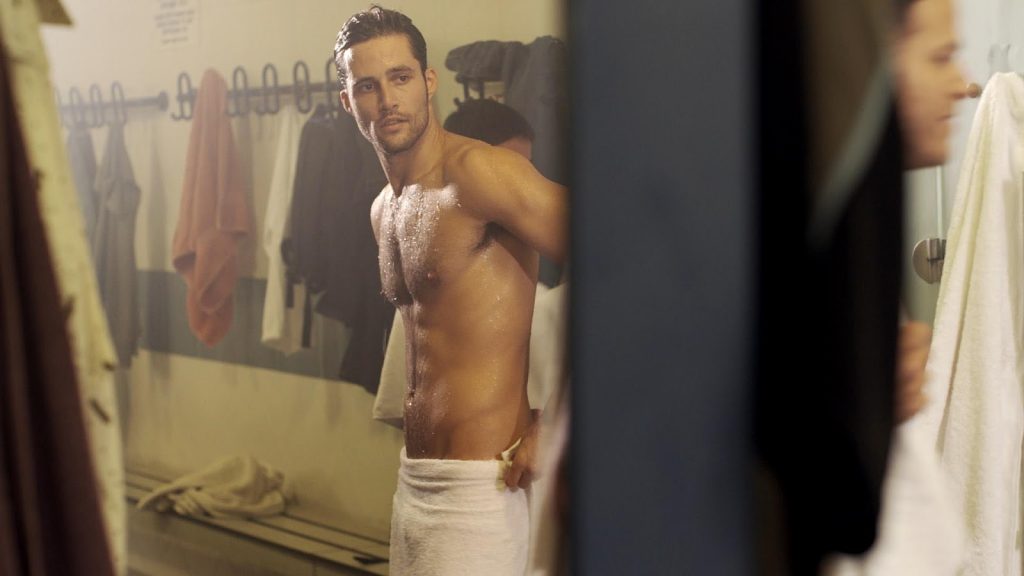 
Marc and Kay are two men training to be police officers at a German academy who begin a relationship. However Marc is torn between his feelings for Kay (Sense8‘s Max Riemelt) and his wife and child at home. Director Stephen Lacant explores the difficulties with labelling sexual identity in this sincere and well-acted relationship drama. 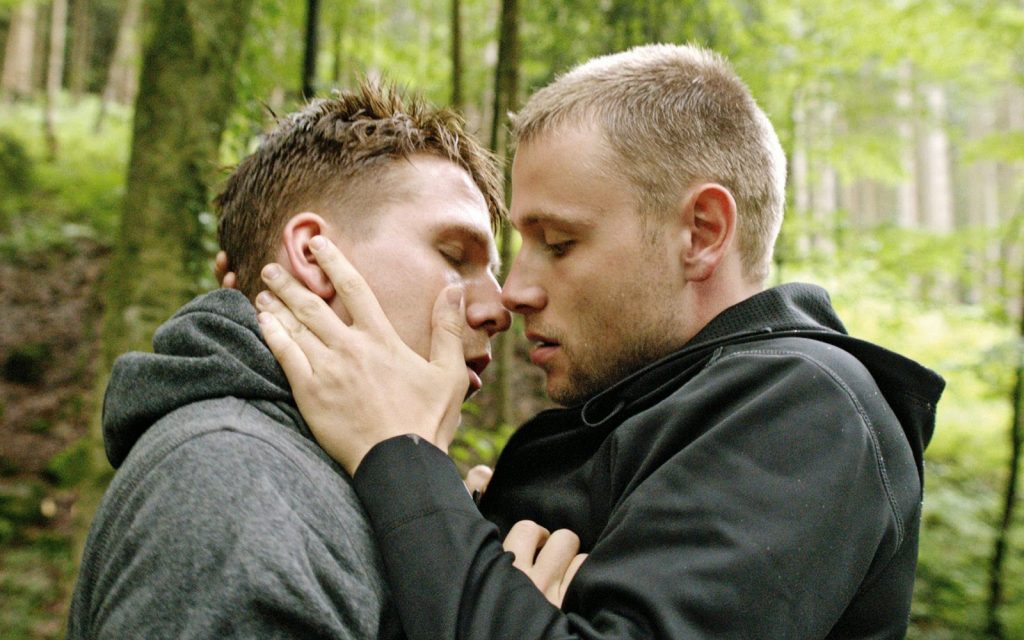 
A hazy and picturesque French cruising spot soon becomes the site of brutal murders, where Franck (Pierre Deladonchamps) falls in love with Michel (Christophe Paou), an attractive and possibly dangerous man. Combining the potential dangers of cruising with highly eroticised direction from Guiraudie makes Stranger by the Lake feel like a queer Brian DePalma film – and we certainly need more of those.


Xavier Dolan’s finest film to date follows a young man grieving for the loss of his partner who meets his partner’s family – who are totally unaware of their late son’s sexuality. Dolan’s world is tentative and slow-burning in its exploration of grief, deceit and lust, making it one of the most engrossing psychodramas in recent years. The relationship between Tom (Dolan) and his late-partner’s straight brother Francis (the Adonis that is Pierre-Yves Cardinal) is utterly spellbinding. 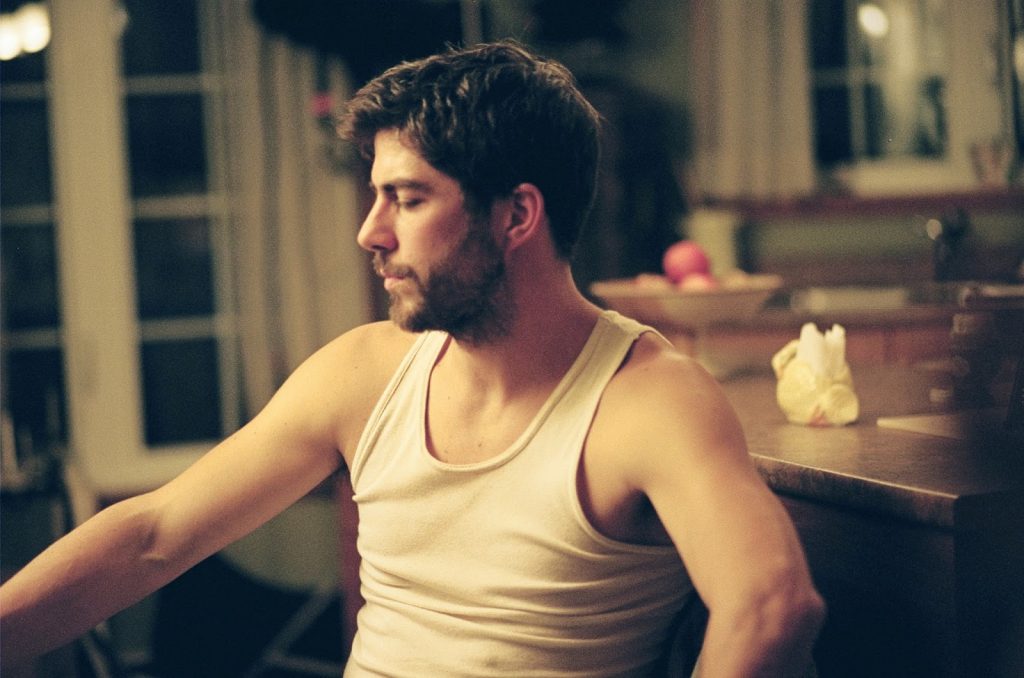 
RuPaul’s Drag Race favourite Bianca Del Rio (aka Roy Haylock) stars as Richard Martinez, a struggling New York teacher working in Texas – who is ultimately fired due to his sexuality. He returns in drag as Bianca Del Rio and challenges these small town prejudices head-on. Hurricane Bianca has the feel of cult classics like Elvira: Mistress of the Dark, Priscilla Queen of the Desert, The Dressmaker and To Wong Foo Thanks For Everything, Julie Newmar where unlikely heroes tackle discrimination with their unique differences. Haylock’s fiery performance and well-paced comic timing makes this a treat – whilst appearances from Drag Race favourites Shangela, Willam, Alyssa Edwards and of course, Mother herself, RuPaul, ensure this is a ready made cult favourite. 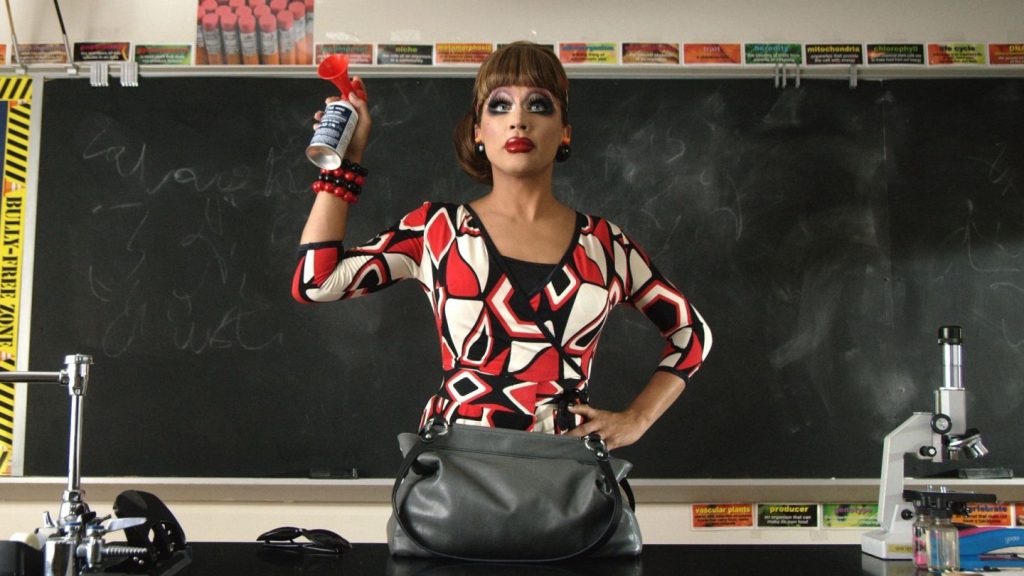 This Canadian drama sees Oscar (Connor Jessup) a gay teen scarred by witnessing a violent hate crime in his childhood. Paired with a homophobic father and distant mother, Oscar finds escape in his creative passions and his talking pet hamster Buffy (Isabella Rossellini). It’s the dichotomy of being in or out the closet that drives Closet Monster’s narrative as it explores the damaging effects of repression. This combined with fears of societal expectations – particularly channelled through Oscar’s relationship with his childish and homophobic father, makes for a watch that will speak to many young LGBT viewers feeling alienated by their sexuality. Dunn uses inspired aesthetics to present this repression – touching on Cronenberg-tinged body horror and jarring sound design to capture this as an almost physical transformation. 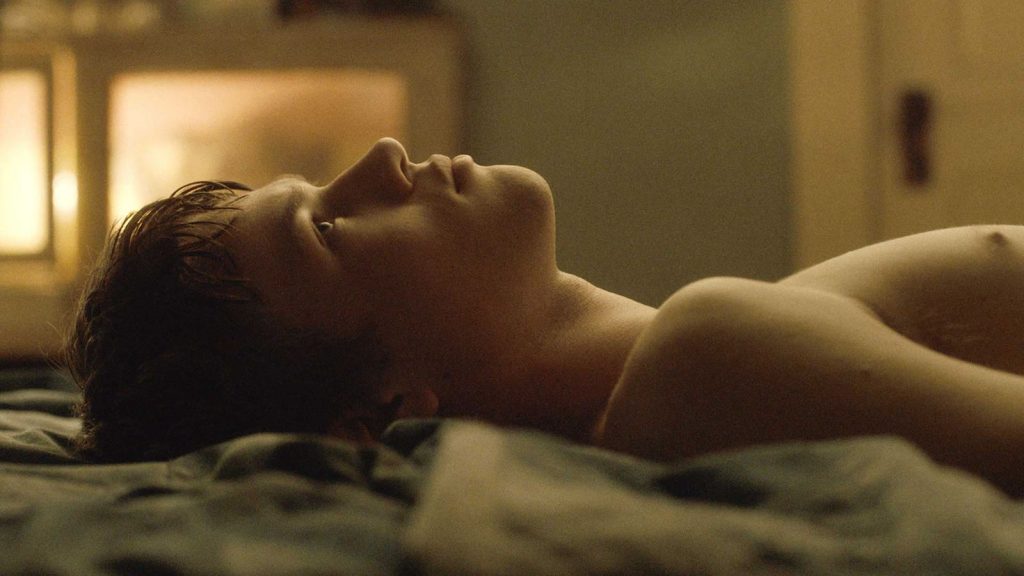 Acclaimed French auteur Ozon delivered this emotionally complex, psychosexual melodrama where a young widow begins cross-dressing in his wife’s clothes. Ozon crafted a watch stowed with complex narrative themes exploring gender identity, human sexuality, and the blurred lines between these two areas. Romain Duris’s performance is thrilling (although we would kill to see Matthias Schoenaerts in the part as originally planned by Ozon) and there is gorgeous support from Raphael Personnaz and the excellent Anaïs Demoustier. 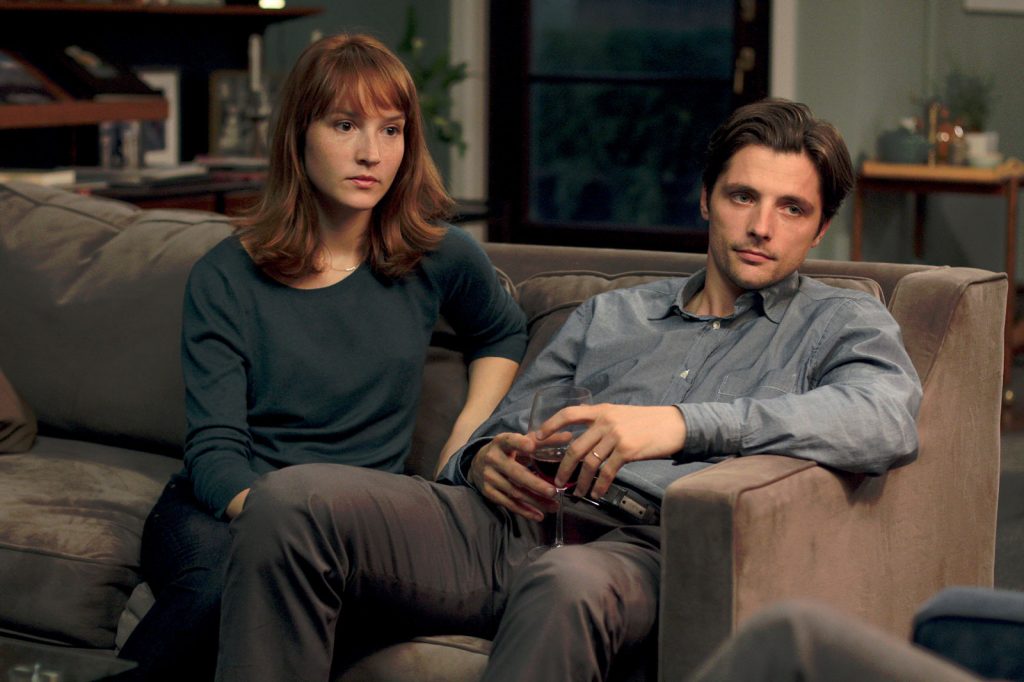 
Tab Hunter isn’t a name that may be as recognisable as some of his Hollywood contemporaries, but the fifties heartthrob turned cult star makes for subject of a magnificent documentary from Jeffrey Schwarz. This exploration of matinee idol Hunter’s closeted life throughout Hollywood’s Golden Age makes for a intriguing glimpse into how little Hollywood has changed in terms of its internalised homophobia. Hunter is every bit the gentleman and this sincere documentary should have him thousands of new fans eager to seek out his career high-points, Polyester and Lust in the Dust. 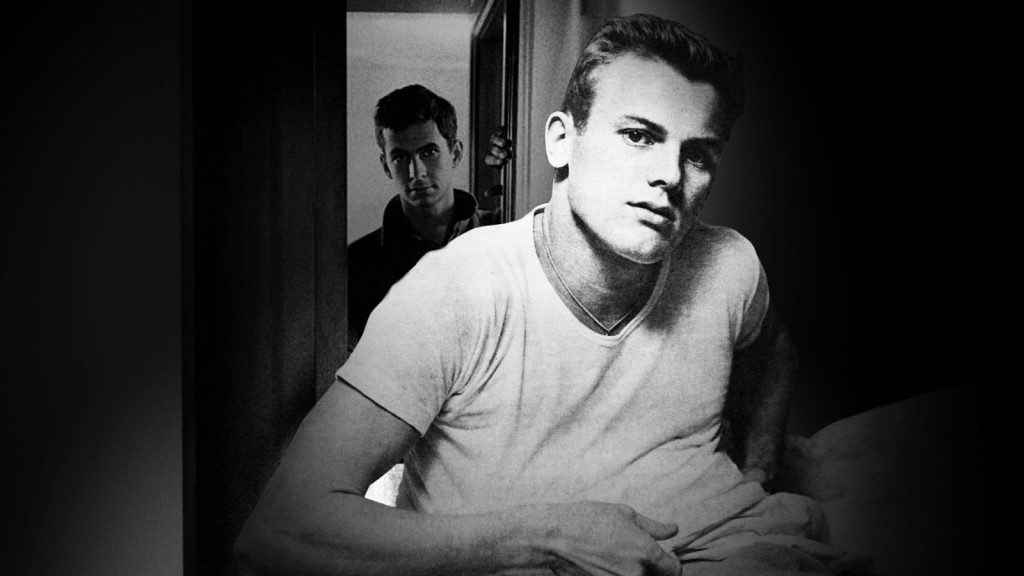 
Tab Hunter’s Polyester co-star, John Waters’ muse, Hi-NRG pop star and drag superstar Divine is the subject of this intimate and heartfelt documentary from Jeffrey Schwarz (again). I Am Divine follows Divine’s life from small town Baltimore to the heights of his biggest success Hairspray – delving into his personal life and featuring fun insights from those who were closest to him. 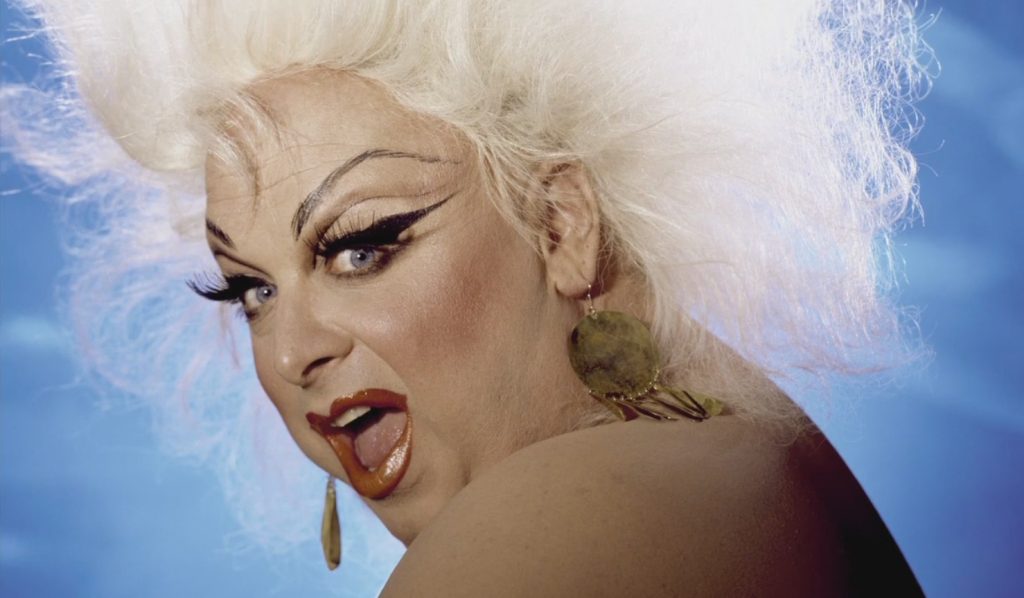