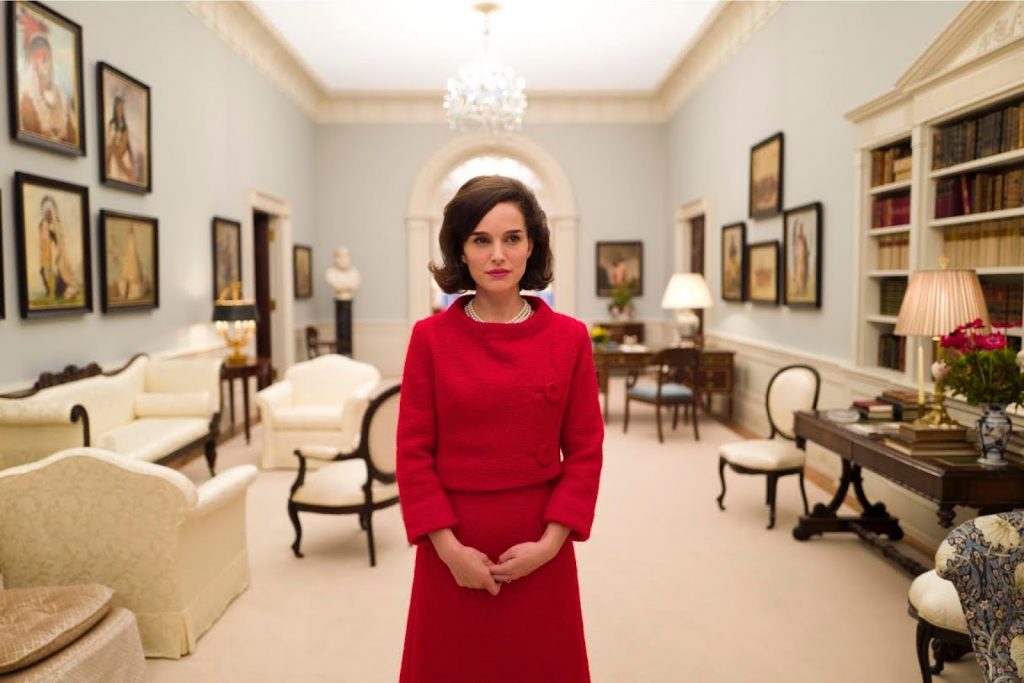 Natalie Portman delivers a performance packed with devastating nuance in the aesthetically magnificent Jackie from Chilean filmmaker Pablo Larrain (The Club). Noah Oppenheim’s screenplay is centred around Former First Lady, Jackie Kennedy’s interview with LIFE Magazine, using this as a launch pad to explore Kennedy’s days in the White House and her coping with the aftermath of her husband’s assassination in a very public spotlight.

Portman’s performance is one of searing intimacy as it explores Jackie both as a public figure (perfectly showcased in her meticulous yet quietly-elegant on screen presence in a recreation of this 1962 White House Tour) and in her private moments – none more devastating than those showing the widow coping with her husband’s assassination. There’s an almost cynical divide between these two Jackies as Portman’s character dryly notes: “Well, I’ve grown accustomed to a great divide between what people believe and what I know to be real,” in her interview with LIFE’s Theodore H. White (Billy Crudup), yet Larrain’s film shows us both and the strength of the woman challenged with living out every moment of the grieving process in public, whilst faced with the grim realities of her husband’s loss, White House transition and mothering two young children. Portman captures these nuanced emotions in a complex and thrilling performance, whilst reflecting a stoicism and desire to preserve her husband’s legacy within history – Portman’s Jackie is not a victim, which makes her all the more endearing.

Oppenheim’s narrative feels part docudrama as it intertwines timelines and blends archive footage/recreations with tense dramatic bouts. This is apparent when exploring the tense transition period as Lyndon B. Johnson (John Caroll Lynch) begins taking charge, relations with Bobby (Peter Sarsgaard) are temperamental and memorials are planned. It’s these ‘behind the scenes’ moments showing the drama and inner-workings of the White House in times of crisis that give Portman a fascinating canvas upon which to deliver her commanding lead performance.

Larrain’s visuals are delicate and unobtrusive, often feeling like a fly on the wall to these devastatingly intimate moments within the White House. Paired with a spine-tingling score from Mica Levi, Jackie feels delicate, softly-restrained and elegant throughout. Yet there is a sense of unease that creeps through the devastating lightness as Larrain’s tackles the assassination scene piece by piece at various stages throughout the narrative, the final of these and the most visually explicit being built-up until the film’s final moments.

Aesthetically and ideologically Jackie is a fascinating piece of cinema. Exploring a grieving woman’s stoicism on a deeply public platform makes a devastating canvas for Portman to deliver a nuanced and must-watch performance. Yet Jackie is not simply a grieving woman, she’s one of the most fascinatingly elegant figures in American history, making Larrain’s film all the more enthralling. Larrain’s gentle, unobtrusive aesthetics help craft a searing intimacy and subtle visual magnitude within the proceedings.