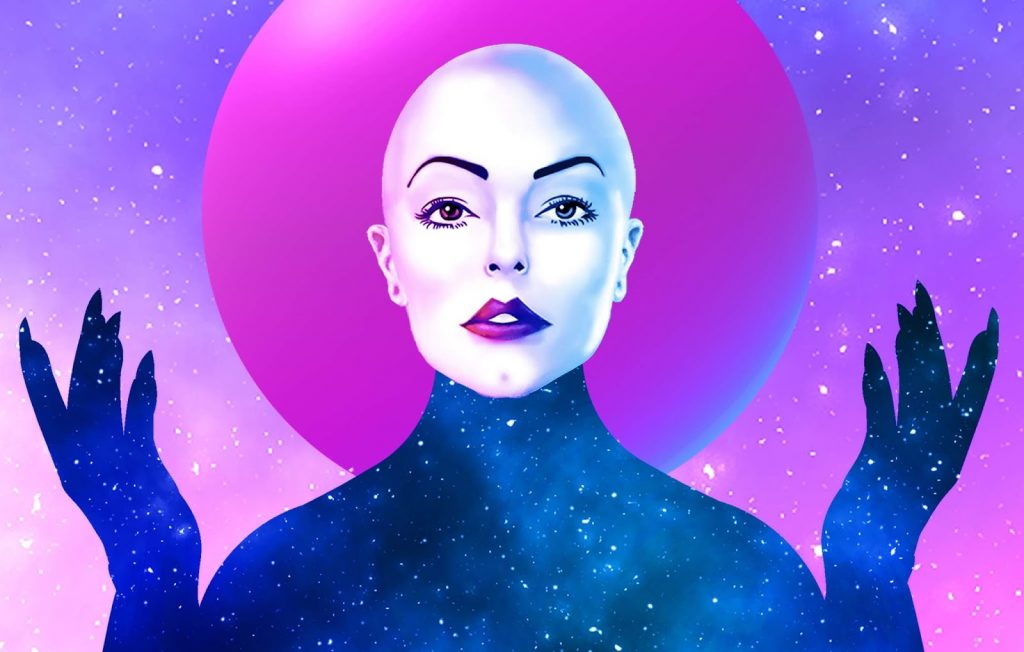 Venue: Assembly on the Mound
Tickets

On an empty stage with a backing screen, McGowan tells us that Planet 9 was a place she envisioned when she ten years old: a utopian world where people would be reunited with those we had lost from pets to people. With mesmeric visuals and atmospheric original music, McGowan explores why Planet 9 is a place humanity could use in this day and age.

McGowan opens by noting that Planet 9 is not a theatrical piece, nor a comedy, instead a piece of art – and when the show begins, it is clear that this is the case. The performer talks us through moments of meditation, encouraging us to close our eyes and reflect throughout. McGowan is a captivating presence and with Planet 9 truly does craft a calming, welcoming and reflective environment that proves immersive in its sense of engagement. She encourages us to break societal confines in her musings between songs pondering how life would turn out without organised religions being pushed upon us or expectations of masculinity and femininity being conformed to.

There is a spirit of bravery and rogue energy pulsing through Planet 9 even down to the fact that McGowan refuses to use timers – instead following the music cues of her sound technician. It therefore feels like a very natural and unforced experience as our hostess shares these unrestrained moments between songs. The music, taken from McGowan’s 2018 album of the same name, is one of the highlights of this art piece. Sirene shines in its shimmering euphoric synth-pop glory, whilst Now You’re Here (which McGowan delightfully notes is about winged horses) has an icy enigmatic charm. McGowan showcases a playful side in Origami – produced by a Massive Attack collaborator – whilst spoken word musical piece Lonely House is a raw anthem that takes the sci-fi imagery of Planet 9 channeling it into a cathartic song of survival. These musical pieces are delivered with charisma and conviction from McGowan with her personal story and that of many other survivors feeling apparent in the poignant metaphorical lyricism.

The musical performances in Planet 9 gain a further enigmatic quality when paired with hallucinogenic visuals that feel reminiscent of cult cinema auteurs Alejandro Jodorowsky and Ingrid Bergman at various moments.

Rose McGowan’s Planet 9 uses striking visual imagery and absorbing musical pieces to invest us in this piece which celebrates survival, human bravery, and encourages us to break from oppressive societal confines. It’s a calming and cathartic experience which McGowan delivers with conviction and charisma.