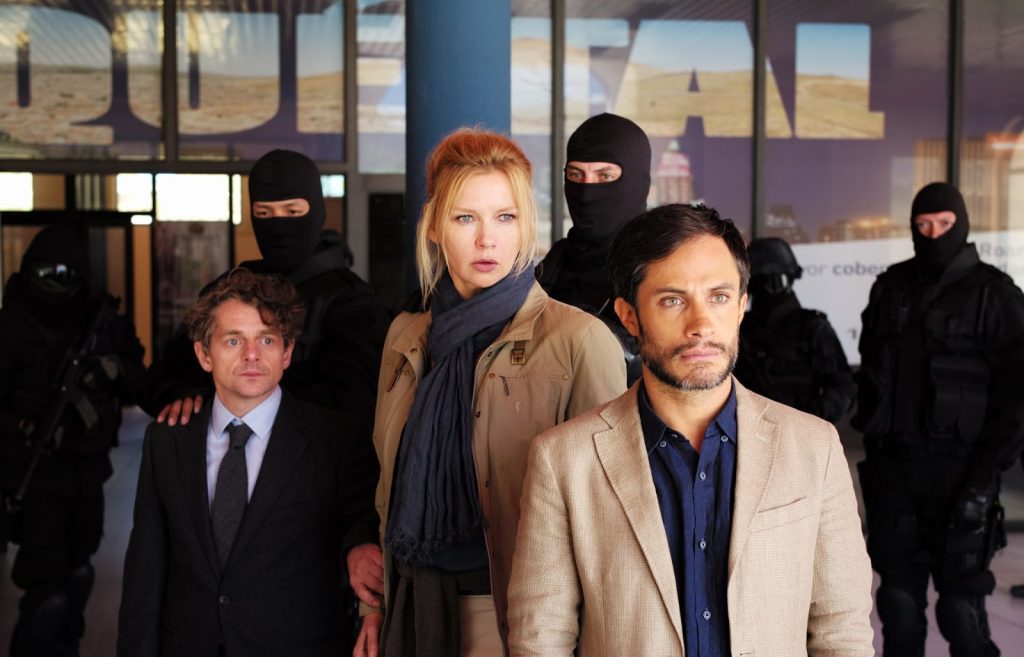 Werner Herzog’s first two dramatic features since 2009, Queen of the Desert and Salt and Fire have both struggled to find a UK distributor despite featuring high profile casts and making large scale festival debuts. The latter of these, Salt and Fire, is a work like no other – Herzog at his most off-kilter and amusing in some time. Based on Tom Bissell’s short story, Herzog adapts this eco-thriller examining man’s damaging impact on the earth.

Research scientists Laura (Veronica Ferres) and Fabio (Gael Garcia Bernal) are sent to South America as part of a UN Taskforce to investigate an ecological disaster. Upon arrival they are kidnapped by Matt Riley (Michael Shannon), the CEO responsible for the disaster. Laura is put through her paces by Matt and must attempt to survive in the sparse South American salt plains as a supervolcano creates an impending threat.

Herzog has crafted a narrative that can only be described as high camp. Laced with moments of utter bizarreness, paired with scenes with razor sharp tension, Salt and Fire is a watch that only Herzog could crafted. Yet narrative plays second-fiddle to the utterly magnificent locations captured with Bolivia’s Salar de Uyuni salt flats and the ominous Uturuncu volcano stealing much of the show here. Herzog and cinematographer Peter Zeitlinger capture these with a real visual splendour, examining the natural beauty of these locales with a range of birds eye aerial shots and closer coverage of these rugged terrains. An abandoned train in the middle of the Bolivian desert provides further visual spectacle.

With such breathtaking spectacle on offer, it is easy to forgive the narrative that never really keeps us in the loop about what is happening. Upon arriving in Riley’s compound, Laura is immediately separated from her colleagues – leaving Veronica Ferres to lead the film, and Gael Garcia Bernal to sadly disappear in a throwaway supporting role. Within her segregation, Laura bonds with her captor (a deadpan Shannon), before, with little explanation, she’s abandoned in the Bolivian salt flats with two blind children by Riley. Part kidnap-comedy, eco-drama and survival piece, Salt and Fire is a curious blend of tones and styles touched with more than a hint of madness. Straight-faced dialogue about alien gang rape and theoretical physicist Lawrence Krauss in a supporting role as a wheelchair-bound henchman – allow Salt and Fire to quickly blend parody and the profound.

Ferres leads with an aggressive conviction – delivering a performance that cannot be described as understated. She barks her thickly-accented demands to her captor, yet verges on warm and maternal at moments. Ferres is an engaging screen presence and leads this confidently. Michael Shannon delivers a deadpan performance, uttering Herzogian prose with a wide-eyed dedication. Bernal steals much of his scenes as Laura’s amorous colleague – with the handsome Mexican star used in his small role for primarily comic relief.

Somewhere between parody and the profound, Salt and Fire is a visually majestic experience and a watch so surreal it could only be a Herzog film.