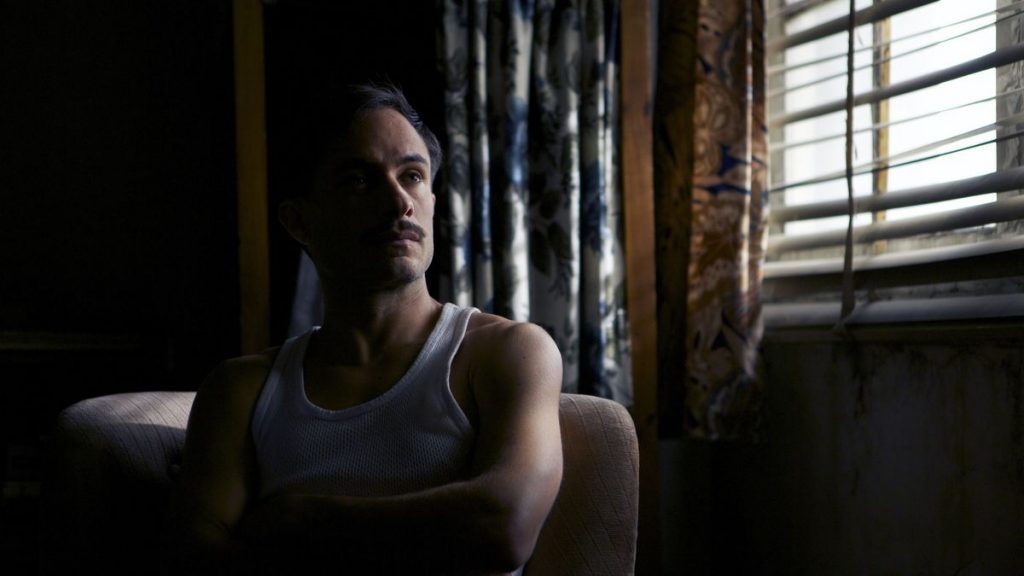 Pablo Larraín reunites with No collaborator Gael García Bernal for Neruda, a film that pays tribute the crossing boundaries between film, poetry and literature. The result is a playful and vibrant piece that captures the power of Pablo Neruda’s movement and the dedication of the man who tried to put an end to it.

Narrated by Bernal’s Peluchonneau, the cop driven by his desire to capture his target, Neruda immediately presents us with a brooding film noir feel. Yet, Larraín and screenwriter Guillermo Calderón inject Neruda with a meta-narrative that blurs the boundaries between literary forms. Peluchonneau is the main character in his narrative, struggling to come to terms with the fact that he is merely a supporting player in grand poet Pablo Neruda’s story. Calderón presents us with characters self-aware of their role in the cat and mouse procedural – each subject to the narrative conventions of their medium.

With readings of Neruda’s poetry, paired with the style of classic cinema (cars driving against projected backgrounds) and self-aware narration, Neruda is a playful and artistic piece that explores the blissful fusion of the arts through one man’s impact on marginalised people. The setting of post-war Chile and the suppression of artistic freedom and politics (previously excellently explored in Alejandro Jodorowsy’s The Dance of Reality and Endless Poetry) makes a fascinating canvas for this tribute to unfold upon. Sergio Armstrong’s cinematography capturing bustling Chilean towns and coastal retreats, paired with the snow-covered Andes – ensuring Neruda also reads like a love-letter to its gorgeous Chilean locales.

Yet praise should also go to Neruda as a high-octane police procedural and Larraín captures moments of tightly-wound tension as Peluchonneau is continually hot on the tail of the fleeing poet. Calderón fills the narrative with a comic sense of bad timing, with Peluchonneau regularly a few feet away from his obsession and those that harbour him. No sequence however, is as taut and breathtakingly beauty as the magnificently constructed final act where the two men finally come face to face on the picturesque Andes.

Gael García Bernal is restrained and brimming with confidence – chest-puffed and pristinely dressed, Peluchonneau’s frustrated yet endless devotion to his quest makes him a magnificent antagonist/protagonist (depending on your political leanings). Luis Gnecco captures the intoxicating charm of the well-read Neruda, yet it’s the gradual hints and his desire to be caught that makes him a fascinating character.

Neruda is whimsical homage to the arts, captured through the guise of a remarkably tense political cat and mouse film.