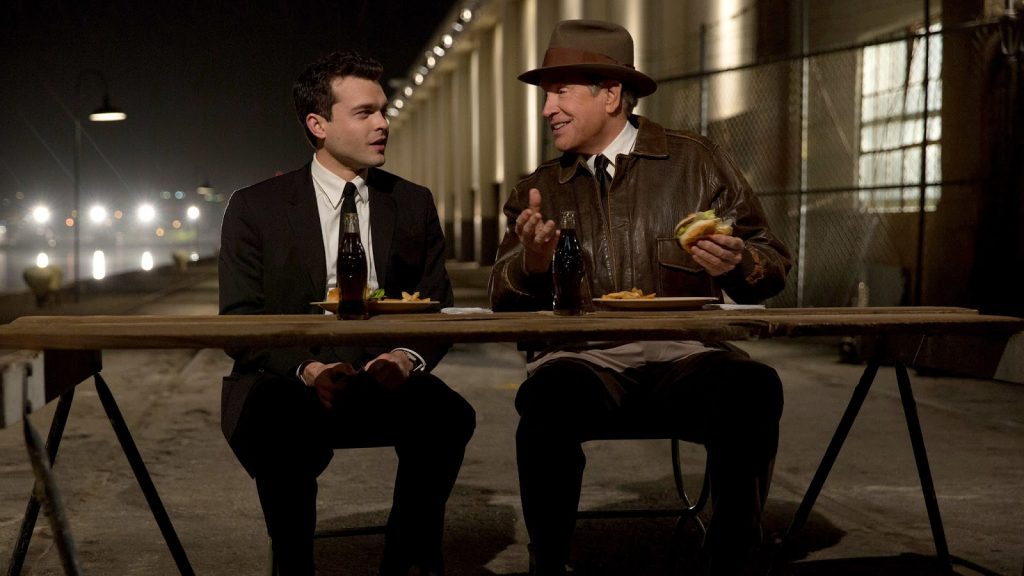 Few filmmakers and actors have CVs as seamless as Warren
Beatty. The actor became a Hollywood icon with a string of critical and
(mostly) commercial successes from Bonnie and Clyde to Dick Tracy. Yet the
mid-nineties marked a decline in the star power of the actor, ultimately
encapsulated by the tanking of 2001’s comic farce Town & Country. Fifteen
years away from the screen and even longer away from the director’s chair,
Beatty returns with Rules Don’t Apply – a project in which he stars, writes and
directs.

Beatty stars as reclusive billionaire Howard Hughes who
develops a romantic relationship with a young starlet, Marla Mabrey (Lily
Collins) who is under contract to him. However, Marla also attracts the
attention of Frank Forbes (Alden Ehrenreich) who is working as Hughes’ driver.
Released late last year in the US, Rules Don’t Apply sadly hasn’t bucked Beatty’s misfortune at the box office –
despite this feature delivering a warm nostalgic charm and a sublime performance
from Beatty. Part love-letter to the Golden Age of Hollywood, part-testament to
the towering might and mystery of Howard Hughes, Rules Don’t Apply has the
bright and breezy atmosphere of a debut from a young Hollywood upstart, not a comeback from a seasoned
industry stalwart. Capturing Los Angeles in the height of its visual splendour:
flash classic cars, gorgeous period costumes and a colourful visual palette,
Beatty and cinematographer Caleb
Deschanel craft an elegant and cleansing watch. A rollicking sixties
soundtrack also gives Rules Don’t Apply a charm-filled, authentic atmosphere.
Beatty provides a performance of towering might as the
elusive Hughes, teasing out his entrance with an almost comic gusto. Like
Hughes, Beatty has been a rare sight in his respective field for some time –
sharing a slight parallel with his period counterpart. Yet when Beatty does
appear (around thirty minutes in), the seventy-nine year old still delivers a youthful spark and intensely
watchable screen presence. The actor has fun with the role as he tackles
Hughes’ inability to be pinned down and his extravagant off the wall demands
(hotels full of ice cream, spur of the moment flights). Yet, perhaps conscious
of this being perceived as an ill-judged vanity project, Beatty relegates
himself to a supporting player – the major misfire of the film. Hughes is a
fascinating, multi-faceted role and Beatty delivers one of the most complex and
fleshed-out portrayals of this (particularly in chronicling Hughes’ decline), that’s why it is disappointing to see him play
second fiddle to a more by-the-numbers romantic subplot.
Whilst Ehrenreich and Collins inject some charm and passion
into their respective roles, the will they/won’t they conventionality of this
romance between starlet and chauffeur feels old hat compared to the more
original Hughes narrative angle.  The
romance lacks the build-up it needs to convince and simply feels slight and
over-sentimental.
Fortunately, as well as Beatty’s unflappable presence, Rules
Don’t Apply is filled with Hollywood’s finest in a variety of snappy supporting
roles. Annette Bening has some fun as Marla’s religious mother, whilst Martin
Sheen, Candice Bergen, Steve Coogan, Alec Baldwin and Matthew Broderick pop
along for the fun.
Rules Don’t Apply delivers period charm and Hollywood elegance
in droves, whilst Beatty reasserts himself as a cinematic treasure with a
towering, complex turn as Hughes.