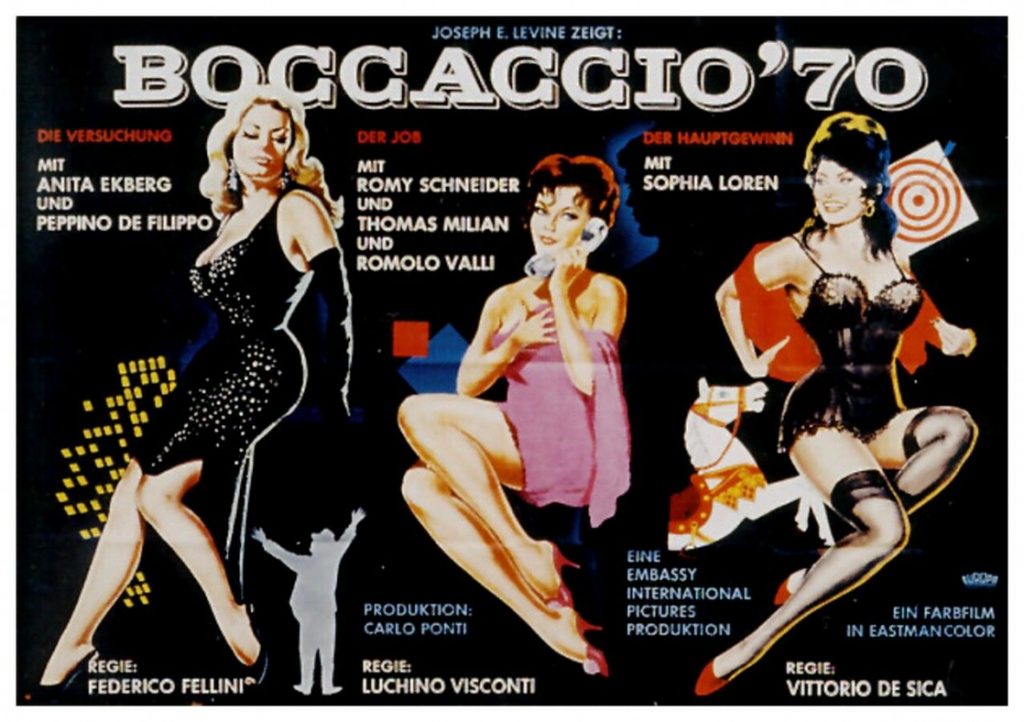 Classic Italian anthology Boccaccio ’70 makes its way to DVD and Blu-Ray in the UK courtesy of Cult Films. Featuring segments from Mario Monicelli, Federico Fellini, Luchino Visconti and Vittoria De Sica, this The Decameron inspired anthology captures the wit and intellect of Italian cinema at its very best.


Opening with Fellini’s Le tentazioni del dottor Antonio (The Temptation of Dr Antonio), we see an elderly citizen outraged by the titillation and excess on display in sixties’ society. Set against the glamour and sexual freedom of the Italian capital with a sizzling jazz soundtrack – The Temptation of Dr Antonio pits this elderly resident against the gradually-progressive attitudes of the time. Surrounded by triggers, Dr Antonio reaches breaking point with the arrival of a giant billboard advertising milk featuring Anita Ekberg. Fellini delivers high camp comedy as events grow increasingly camp as the giant billboard pin-up comes to life and torments the elderly moral purist. This is Fellini at his most provocative and fun, setting Boccaccio ’70 up to a stellar start.


These recurring themes of glamour and sensuality continue into Il lavoro (The Job) by Luchino Visconti. This sees a married woman find a strategy to cope with her husband’s passion for call girls. Stars Romy Schneider and Tomas Milian deliver an insatiable sixties cool and sensuality to their roles. Visconti directs this skit with an elegance and grandeur, however, this is perhaps a little too dialogue heavy for its own good.


This is followed by the Sophia Loren starring La riffa (The Raffle) by Vittorio De Sica. De Sica’s segment follows a sacristan man who wins a night with a glamorous fairground assistant. Here Loren overplays the gratuitous sensuality with fantastic comic effect with her character reflecting men’s general sense of powerlessness when in the presence of a beautiful woman. This amusing tale of female empowerment amidst the sexual revolution provides enough glamour and humour to engage and amuse throughout.


The final act, Renzo e Luciana (Renzo and Luciana) by Mario Monicelli sees a married couple attempt to keep their impending nuptials a secret from their draconian employer. Marisa Solinas and Germano Gilioli star as the handsome couple caught in the twisted business conventions of the period. An ensemble of gorgeous Italian actors add an elegance to the proceedings. Monicelli captures the humour in this skewed tale, whilst Solinas captures woman as master of her domain.


Boccaccio ’70 is an elegant and humorous snapshot of some of Italy’s most acclaimed auteurs at their finest. With a cast consisting of some of the world’s most glamorous stars, Boccaccio ’70  provides a glamorous trip to post-war, sexually-liberated Italy.


You can purchase Boccaccio ’70 on Amazon.