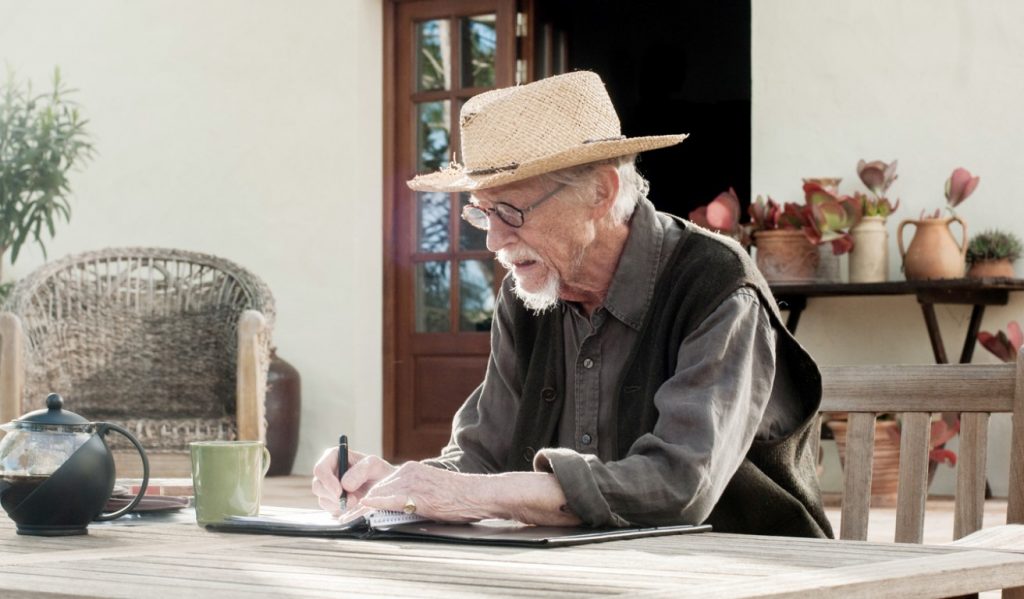 Charles Savage adapts N.J Crisp’s play which follows screenwriter Ralph (Hurt) living in the Algarve with his wife/former-nurse, Anna (Sofia Helin). Now terminally ill, Ralph sets out to keep this secret from his wife whilst he attempts to reconcile with estranged son Michael (Max Brown).

Ralph is a near-caricature of unpleasantness who within the run-time of That Good Night is cantankerous and borderline misogynistic. A capable performance from Hurt and predictable narrative track from Savage set out seeds of redemption which predictably build throughout the film with a predictable schmaltz. As Ralph approaches “that good night,” the film takes a contemplative tone in which Ralph grows to see the errors of his ways in his treatment of wife Anna and his son Michael. Padding this transition out are scenes of generally uninteresting family drama – tense meals out, the awkward meeting between Ralph and Cassie (Michael’s girlfriend played by Erin Richards) and a number of close health scares.

Adding some intrigue to this conventional broken family dynamic is Charles Dance’s mysterious visitor. A clear parallel for Ralph’s mortality sees Dance as a man from an ‘organisation’ which can ease Ralph’s suffering. What follows are several exchanges between Dance and Hurt which succeed due to the charismatic personas of both actors. It’s all a bit Last of the Summer Wine by the way of The Seventh Seal. The quiet, but beautiful sun-drenched Algarve locations make That Good Night an aesthetically pleasing watch, whilst delivering a calm and serene atmosphere throughout.

Most of the emotional pathos that Styles’ film delivers comes from Hurt’s central performance – and whilst this character transition does not feel hugely authentic, there is enough of a twinkle in Hurt’s eye to help you warm to him. Ralph may be an unpleasant misogynist but Hurt’s natural screen charisma and energy ensure he maintains our attention throughout the feature despite the tired, conventional narrative.