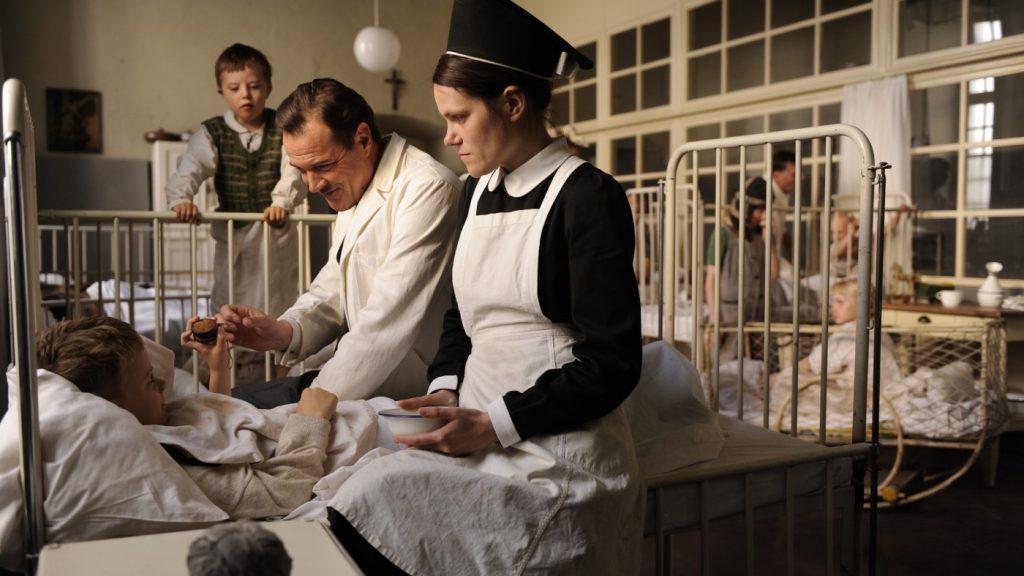 Wessel finds the real horror of this true tale in the fact that it is not the Nazis directly carrying out these terminations, but instead trusted medical professionals. Veithausen’s sanatorium is filled with sick children and disabled adults – both defenceless, and director Wessel depicts the surrounding with a cold and clinical eye. The inhabitants of the sanatorium live out their days in this stark medical environment run by the charming and apparently caring Veithausen. The complexities of Veithausen’s problem are never fully explored and whilst we see his kind personal treatment of patients, this is paralleled with a almost gung-ho attitude in exterminating them. Koch is a skilled actor, but he never has the chance to explore this dichotomy in Karsten Schmidt’s screenplay.

Wessel depicts this atrocity through the eyes of Ernst, a young boy thrown into this cold, twisted environment. In an attempt to capture the human heart of the tale, Fog in August, depicts the events through Ernst’s eyes – viewing these atrocities through a lens of confused childhood innocence. Yet this may be why Fog in August does not connect on a deeper emotional level – whilst the events depicted are horrifying – they are never presented with the full horror they merit. Perhaps this works to Fog in August’s advantage, capturing the quiet and unassuming way in which the medical professionals slowly murdered their patients.

There is an ambiguity in Wessel’s direction that further impacts Fog in August’s narrative momentum. A friendship developed between Ernst and a young female patient never fully touches in the way it should be – with the dialogue between the pair feeling inauthentic of two young children. High praise should, however, go to Pietzcker who delivers a mature and impressive lead performance and carries much of the dramatic heft of the feature.

Fog in August quietly unsettles in its depiction of the horror of the German euthanasia program, despite never quite having the profound or lasting emotional impact a tale this shocking should merit.