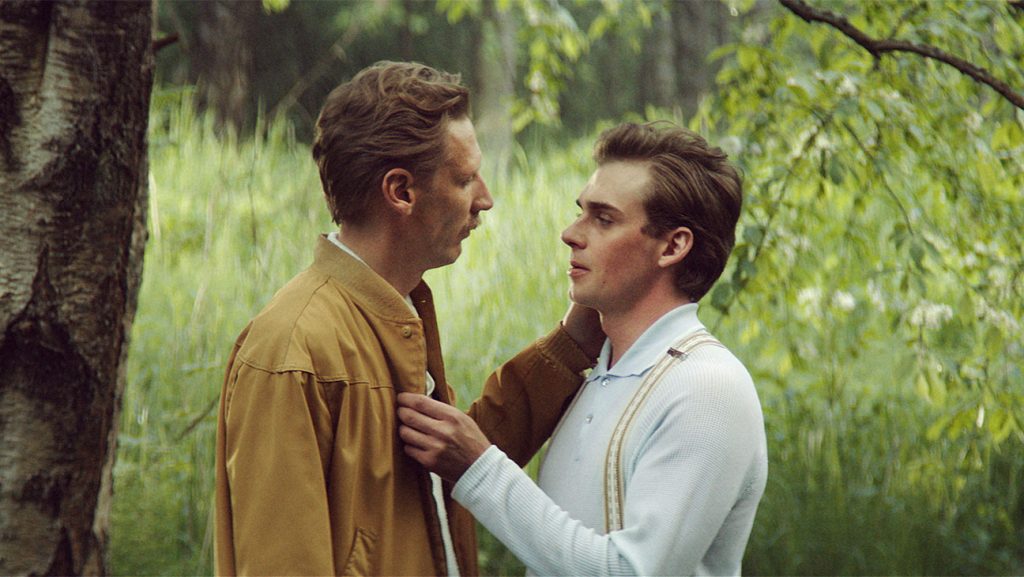 Dome Karukoski directs Tom of Finland, a biopic centred on Touko Laaksonen, who would become a celebrated figure in the gay community thanks to his homoerotic drawings which became a cult phenomenon worldwide. Tom of Finland succeeds as both an intimate exploration of Laaksonen’s life and as an important depiction on the transition of gay life from wartime to the late-eighties. Karukoski manages to clearly capture both these aspects and create a fantastically entertaining film all at the same time.

Closeted Touko “Tom” Laaksonen (Pekka Strang) returns from serving in the Finnish army during WWII, haunted by a harrowing event. He attempts to live out his life discreetly whilst his home country continues to persecute gay men, yet Laaksonen finds solace in his artwork of uninhibited gay men. Tom of Finland captures his rise to international stardom, whilst remaining closeted in his personal life.

Aleksi Bardy writes Tom of Finland for the screen and provides a comprehensive, intimate picture of Tom’s life in conservative Finland. Crafting Tom as a war hero living with a secret as he navigates through his right-wing homeland captures some sense of the injustice at the heart of his story. In Karukoski’s direction during the scenes in Finland, there is always a lurking sense of threat and danger, particularly as Tom gathers with other gay men. Cinematographer Lasse Frank Johannessen captures Tom’s discreet sex life in darkly lit forest or park-set exteriors with potential exposure and danger lurking around every corner.

Karukoski directs flashbacks that are interspersed throughout with a dreamlike unease, shot in stark, gorgeous Finnish forestland, these flashbacks follow Tom throughout the film. These help us connect with Tom on an emotional level and help further develop the quiet, protective but also loving relationship that Tom has with his sister (Jessica Grabowsky). Tom’s relationship with long-term boyfriend Nipa (Lauri Tilkanen) is also explored in a touching fashion, particularly as the pair grow in confidence to express themselves in still conservative Finland in the seventies. As Tom finds himself further absorbed into the gay community, the horrors of Finland’s political and social attitudes become fully apparent – especially as those within his friendship group become subject to conversion therapy.

Tom’s discreet drawing leads to several close calls in conservative Europe, but this is juxtaposed with his growing fanbase in the USA. This stark contrast between Finland and Los Angeles highlights both as extremes – the latter as a hot, sexually-liberated metropolis and the former as icy and conservative. This leads to much of the film’s humour – a police raid on a US pool party in particular. This allows for the film to further come to life with some exciting stylistic cues such as disco music and bright cinematography. Yet this US chapter in Tom’s life gains further poignancy with Tom’s rise coming before the AIDs outbreak of the 80s – adding further emotional depth to Bardy’s narrative, whilst also capturing Tom’s real life influence and joy that he brought the gay community.

Tom of Finland is a vibrant and touching celebration of Laaksonen’s life and impact. Highly-charged aesthetics and a narrative that captures the strength of the gay community make Tom of Finland a must-see.