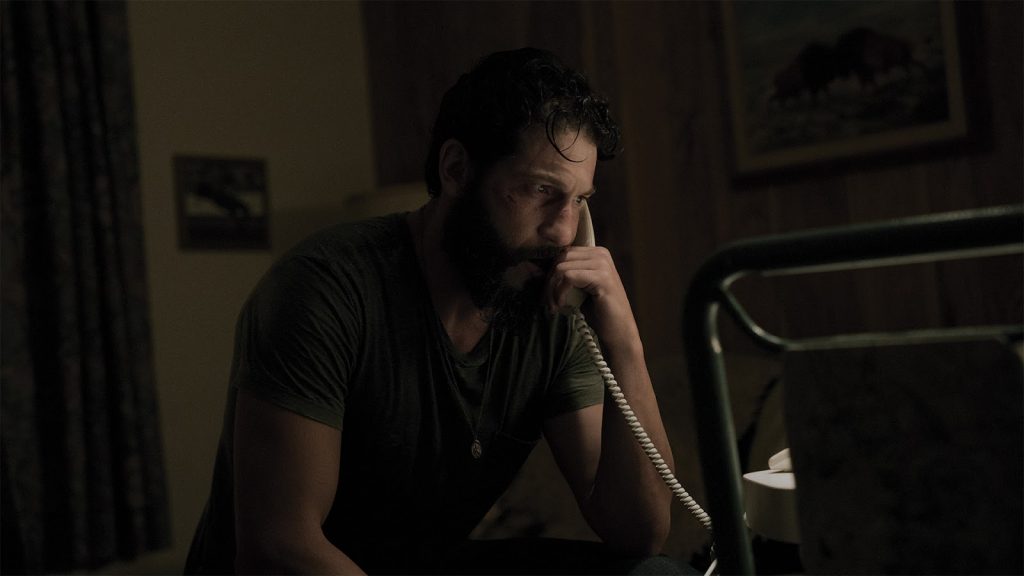 Benjamin and Paul China write Sweet Virginia which follows former rodeo champ, Sam (Bernthal) living a quiet life running a small town motel. He soon starts a rapport with customer, Elwood (Christopher Abbott), who unbeknownst to Sam is a hitman out to collect his fee from town resident Lila (Imogen Poots) after killing her husband.

Sweet Virginia is a stellar example of contemporary noir (evoking a similar tension to the likes of Jim Mickle’s Cold in July) exploring the relationship between Elwood and Sam – two very different contemporary men, tangled in each other’s stories. Whilst Elwood is aggressive and borderline unhinged with an inability to control his emotions, Sam verges on a quiet repression – a figure who gradually simmers as the narrative events build. These events are meticulously crafted by Sweet Virginia’s writers who pull together numerous narrative strands crafting a satisfying crescendo of an ending.

Dagg directs with a stirring tension capturing both men going about their respective business before colliding. Sam quietly maintains his motel and proves himself to be a well-liked figure amongst his community despite coping with the ghosts of his rodeo career, whilst Elwood flaunts the characteristics of a classic noir villain – aggressive sex, violent confrontation and general troublemaking. With Sam unaware of his newfound guest’s darker side swims closer to the sharks – something that creates fantastic dramatic tension as a viewer – particularly as Elwood’s personal connection to Sam’s on/off flame Bernadette (Rosemarie DeWitt) is drawn into play.

Cinematographer Jessica Lee Gagné captures this brooding tone in the dimly lit motel rooms, darkened residential homes and forested Virginia locations as settings for this sense of unease and impending danger. Combined with the sharp tension that Dagg gradually builds up throughout Sweet Virginia, the film commands your attention throughout suggesting that at any moment Elwood and Sam’s stories could collide.

Bernthal’s delivers a performance of restraint and quiet magnitude, a quiet man gradually pushed by the actions of others around him. This is an absorbing performance, that’s pleasantly juxtaposed with Christopher Abbott’s (James White) impressively showy performance as the aggressor Elwood, a man who seems continually ready to snap.

Sweet Virginia is a thrilling slice of contemporary noir. Expertly tense and meticulously crafted, this is a film that commands your attention and holds you in a vice-like grip throughout.