The most eclectic end of year ‘best of’ lists are on there way, and we are kicking things of with our favourite albums of the year. Our top picks of the year span several genres from country to R&B with everyone from drag queens to Spanish disco royalty making appearances. These are sorted alphabetically. Enjoy and as always let us what you think in the comments selection below.

Baccara – I Belong to Your Heart

Spanish pop queens Baccara returned with their first new studio album in seventeen years. Filled with synthy Eurodisco delights, María Mendiola’s Baccara set their sights back onto the dancefloor for this thrilling set of eleven brand new tracks. The title track ‘I Belong to Your Heart’ gives a taster of the icy-pop sounds of new Baccara.


Veteran pop-rockers Blondie presented an album with contributions from everyone from Johnny Marr to Sia. Deviating slightly from the dance-centric sounds of previous LP Ghosts of Download, the Debbie Harry fronted group made a return to a more new wave sound. Tracks like Fun and Doom or Destiny are a testament to the band’s enduring sound and appeal.

The UK’s answer to ABBA returned with their first album of original material in thirty-one years and teamed up with SAW hitmaker Mike Stock to do so. The group presented a collection of upbeat sugary pop songs that stayed true to their classic sound. Control Freak, Up for the Fight and Amen remind us of why Eurovision winners Bucks Fizz were such a pop-event in the eighties.

The delicate vocals of French chanteuse Carla Bruni shine on French Touch, the singer’s take on an English language cover album. Bruni’s subtle vocal beauty touches on covers of Enjoy the Silence and Perfect Day, whilst tracks like Miss You and Highway to Hell deliver pleasant surprises to the listener.

Cinematic and musical royalty, Charlotte Gainsbourg collaborates with French electronic musician SebastiAn for Rest, her first full album in six years. From slinky electronic dancefloor anthems like Sylvia Says and Deadly Valentine to the touching emotion of Kate, Rest is Gainsbourg’s most accomplished and satisfying album.

Darius Rucker – When Was the Last Time

Darius Rucker returns with his unparalleled blend of upbeat, old-school country in When Was the Last Time. Life’s Too Short delivers a joyful singalong chorus, Twenty Something sees the singer unveil a poignant emotional side, but it’s Straight to Hell featuring Luke Bryan, Charles Kelley and Jason Aldean that proves to be the highlight. The track plays like a new incarnation of something by The Highwaymen.

The Greatest Showman may not be winning over critics for its narrative, but the Hugh Jackman starrer deserves all the praise it gets for its slick, well-produced soundtrack. The music may feel anachronistic with the film’s setting – but the soaring feel good nature of these contemporary pop anthems is undeniable. Jackman belts out standout tracks Come Alive and From Now On with a theatrical bravado, whilst Michelle Williams’ Tightrope is filled with touching sentiment.

Jackie Shane – Any Other Way

Maybe we are cheating with this one, but since Shane was a figure that was new to so many people, we’ve included her compilation Any Other Way in our list. The reclusive soul singer had direct involvement in this collection of highpoints from the her brief but now prolific career. Money (That’s What I Want) and Sticks and Stones present sharp, sassy soul at its best.

Jake Miller has been gradually making the transition from rap to more pop-centric sounds over the past few years (see his EP, Overnight). 2:00am in LA presents slick pop sounds with finely tuned production that allow Miller’s likeable personality to shine through. Highlights include I Wish You Didn’t Love Me and Sleeping with Strangers.

Jamiroquai go full-on Moroder inspired disco with Automaton, an album with such a rich visual aesthetic that even infiltrates the music. Upbeat and funky throughout, Jamiroquai present a number of robo-tinged dance anthems ensuring this is non-stop fun.

Kesha’s first album in five years saw her return after revelations of deep emotion struggle and abuse, it’s therefore no shock that Rainbow is an emotive listen. Yet this is a deeply empowering set that tackles touching ballads (Praying), country-soul (Basterds, Old Flames) and solid pop (Woman).

Lana Del Rey’s latest album is yet another reassuringly cinematic release that stays true to the breezy melancholic pop sound of her previous albums. Collaborations with Stevie Nicks, Sean Ono Lennon and The Weeknd add freshness to Del Rey’s formula, whilst nostalgic anthems like “God Bless America – and All the Beautiful Women in It” present her doing what she does best.

Following the success of Girl Crush was going to be tough for the country hitmakers, but The Breaker presents several examples of a band continually playing with expectations and their own sound. The album has echoes of The Mammas and Papas and Jefferson Airplane, paired with the bands’ soaring country harmonies. Highlights include Better Man, Drivin’ Around and Lost in California.

Cover albums don’t usually fill us with much excitement but Marc Almond’s Shadows and Reflections takes a number of lesser known sixties torch songs and pairs them with Almond’s distinctive vocals. Lush orchestral instrumentation and Almond’s theatrical delivery help the singer breathe life into this exciting set of classic anthems. Not for Me, Blue on Blue, and Shadows and Reflections are some of the album’s many highs.

Another album that provides us with deep visual imagery is Marty Stuart’s woozy, dream-like Way Out West that transports us to the baking dustlands of the American west. Stuart presents us with country music with depth, intelligence and gravitas – the result is the strongest album of his career.

Operating at a 100% success rate with his previous two albums (Kaleidoscope Dream and Wildheart), Miguel’s home run continues with War and Leisure. Caramelo Duro provides a sexy Latin highpoint, whilst Pineapple Skies also showcase the singer’s playful side. Anointed is a steamy romantic sex jam, whilst Told You So provides old school funk. Less instant than Wildheart, yet equally impressive on further listens.

Original Beach Boy Mike Love may not have a solo career to rival former-bandmate Brian Wilson, yet his second solo album Unleash the Love has its charms. The double album presents originals (eco-friendly, uplifting surf-pop anthems) like Unleash the Love and re-imagined Beach Boys tracks (like Do It Again with John Stamos).

Returning to the dancepop sounds that were lacking from his previous studio LP, Butch Queen, RuPaul presents slick, high-octane anthems delivered with soaring vocal might. Kitty Girl is playful dancepop, Call Me Mother has nineties hip hop vibes, whilst standout track Lady Cowboy is like Ru doing Shania Twain – and the results are iconic.

One of the most anticipated musical returns, fifteen years in the making was Shania Twain’s comeback with Now. The eclectic set reunites us with Twain’s unmistakable pop country sounds, slick production and uplifting lyricism.

Zac Brown’s dance-centric side project Sir Rosevelt got off to a rollicking start with Sunday Finest, yet the project stalled in later months. After somewhat of a creative overhaul, the band returned a full LP this December. Feel good dance tracks packed with a range of instrumentation and production style reveal the real versatility of Brown’s distinctive vocals. Nothing’s Gonna Stop Us and Robert Baker are tracks that may convince you to download/stream.

Steps – Tears on the Dancefloor

Steps proved they could compete in the contemporary pop market with their first pop album in since 2000 (their Christmas album was fine, but not worth too much discussion) – but Tears on the Dancefloor was a soaring return to the dancefloor friendly pop that they do so well. Scared of the Dark kicked things off in magnificent fashion, whilst No More Tears On The Dancefloor and their version of I Will Love Again reminded us that 2017 is undoubtedly the year of Steps.

The versatile country star finds himself edging ever closer to the pop world with Life Changes. Rich in sentiment and filled with fun, Life Changes is breezy, well-intentioned country. Unforgettable delivers Rhett’s nostalgic view of romance, Craving You is a sexy pop anthem, whilst Drink A Little Beer takes us back to familiar good time country territory.

David Lynch and Mark Frost’s Twin Peaks revival was the television event of 2017 and perhaps more surprisingly, one of the musical events of 2017. The Roadhouse bar and its plethora of guest artists were key in shaping the mysterious aesthetic and ambiance of the return to Twin Peaks. Rebekah Del Rio’s No Stars, Sharon Van Etten’s Tarifa, The Cactus Blossom’s Mississippi, and Chromatics’ track Shadow all thrilling highpoints.


All our top picks are available to buy and stream now. 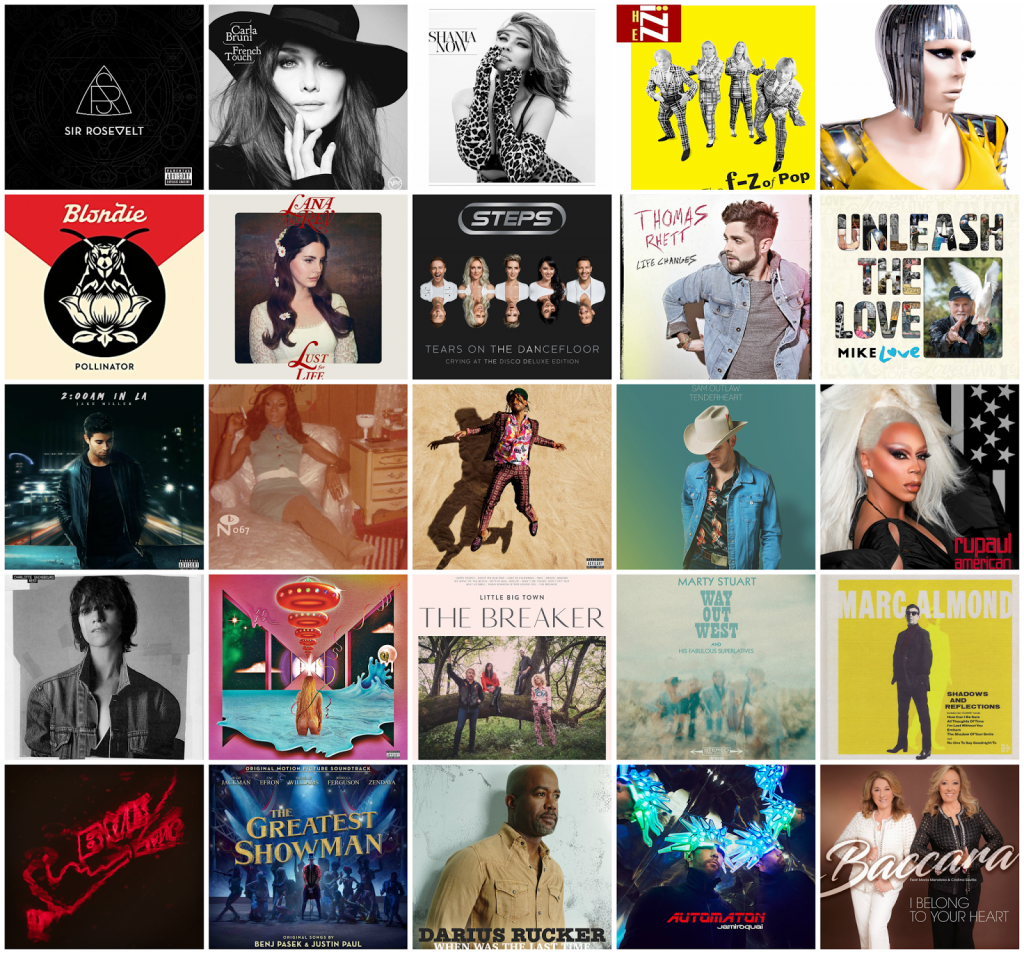