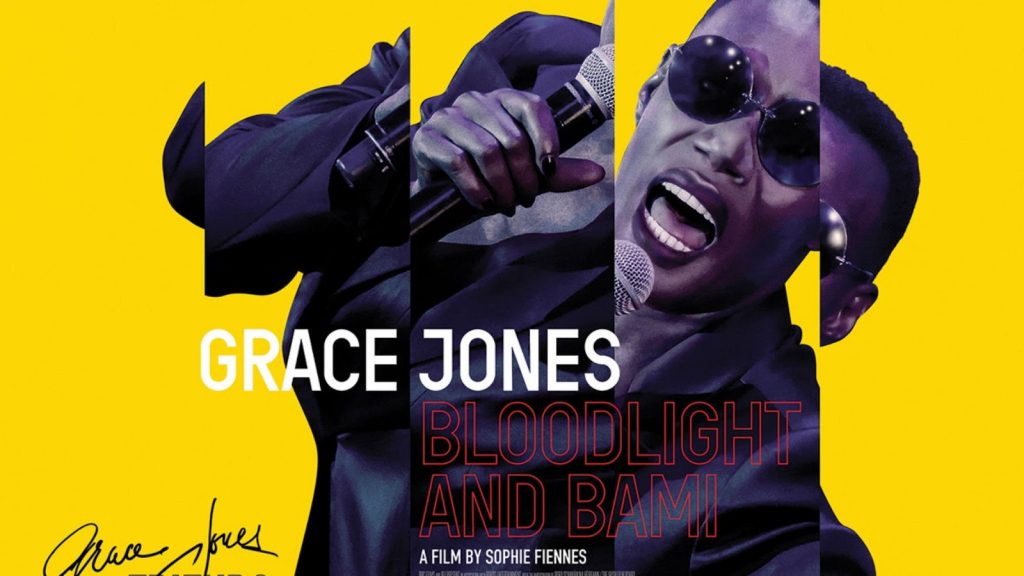 Jamaican musical icon Grace Jones is the subject of Sophie Fiennes, Bloodlight and Bami, a hybrid fly on the wall documentary meets concert film. Opting to avoid the talking head structure of the conventional documentary, Fiennes follows Jones visiting family in Kingston, recording her most recent album (2008’s Hurricane), and footage from her live shows.

Opting against the traditional structure of a documentary means that we avoid the classic narrative structure of the music documentary that could have gone something like (in Jones’ case) – the early life, the disco years, the film roles, the failed nineties comebacks etc. However, instead of this expected manufactured feel, we’re given an esoteric snapshot of Jones. This is Grace Jones on her terms – and really, how else would she want a documentary?

Intimate glances of Jones visiting her homeland give us a snapshot of vivacious, surprisingly sentimental woman behind the music superstar. Her frustrations recording and attempting to attract the support of ‘industry figures’ when working on Hurricane reveal the savvy, no-nonsense businesswoman we would expect. Frustration of a poorly executed French television performance of La Vie En Rose (dubbed too kitsch with its dancing girls and neon lights) reflect the admirable musical prowess of Jones. Yet, these are all somewhat unsurprising sides of Jones – especially ones that fans will be familiar with. Therefore, sometimes Fiennes’ eye can be too casual and non-intrusive to actually feel like we’re getting to see an accurate picture of Jones.

The real standout sequences are those scattered performance scenes of Jones on stage. Seeing the singer perform signature anthems such as Slave to the Rhythm and Love is a Drug adorned in tribal costumes, bejewelled golden skulls or with a hula hoop captures a sense of the performer’s dynamic stage persona and inimitable vocal might.

Grace Jones: Bloodlight and Bami captures an intimate yet expected snapshot of Jones – one that fans may feel like they have seen before. Yet there’s much joy to be found watching the extroverted performer going about her business in both Jamaica and Europe. The on stage performances feel cinematic and spectacular, with Jones’s immense persona well suited for the big screen.