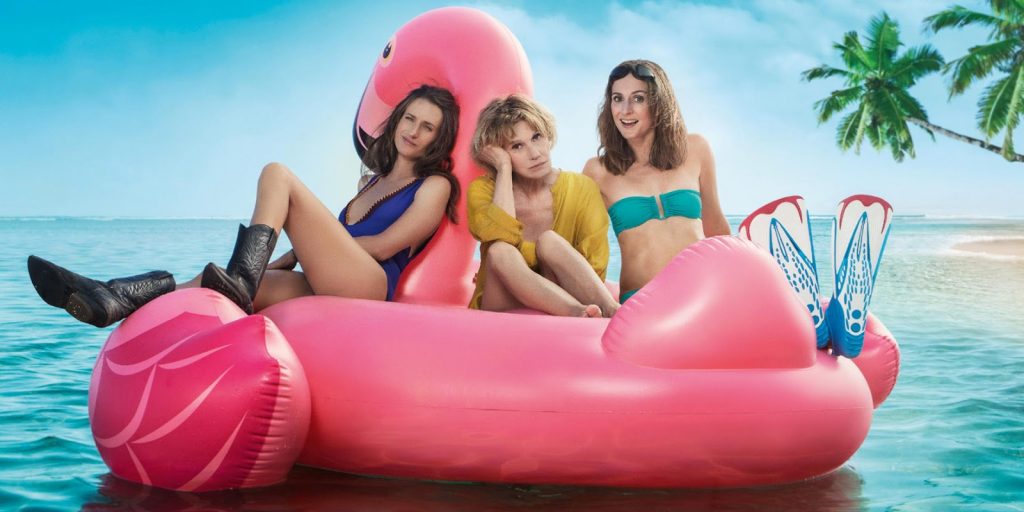 Eloïse Lang directs Dumped (Larguées), a female-fronted comedy that explores finding yourself after the heartbreak of a long term relationship. This is a French-language remake of Danish comedy All Inclusive. Dumped shines through its breezy good humour and well-crafted leading characters.

Lang both writes and directs this adaptation which stars Miou-Miou as Francoise a recently-sixty divorcee crushed by a sense of hopelessness after her husband leaves her for a younger woman. In a bid to cheer their mother up, her adult daughters free-spirit Rose (Camille Cotton) and ordered parent Alice (Camille Chamoux), take her on a tropical vacation.

Lang approaches Dumped with a smooth blend of breezy comedy, light romance and relaxed family drama. The filmmaker has a natural eye and depicts the film’s core relationships with a natural sincerity – even when placing these characters in outlandish comic situations. Each of the film’s protagonists is at a different point in their life and tackling their own personal challenge – Francoise’s heartbreak, Rose’s lack of order, and Alice losing her spark through the banalities of motherhood. Much of Dumped’s narrative relies on humorous character interactions with the distant family reconnecting and supporting (or triggering) each other’s progression and growth. This may make the emotional backdrop of Dumped sound weighty, yet it is most certainly not. Sincere, light and effective.

Chamoux’s Alice shines in a number of comic moments in which she attempts to re-inject a spark into her romantic life – an attempted seduction scene and a inappropriately timed Facetime call being the comic highlights. Miou-Miou excels as the morose matriarch delivering blackly comic musings on all the joy that surrounds her. The actress takes on Dalida and Alain Delon’s Paroles, Paroles in a scene which encapsulates this – yet much of the joy of Dumped sees the light returning back to Francoise’s life as she rediscovers herself on the island. Cotton is similarly charismatic as the more impulsive and erratic of the daughters. Whilst Lang has a keen eye on what makes the female characters amusing, attempts to make the male characters amusing generally fall flat.

Antoine Monod’s sun stroked cinematography captures an off-kilter beauty in the tourist-trap island setting, whilst an upbeat contemporary pop soundtrack keeps proceedings light and accessible. Dumped blends laugh out loud humour and sincere heart as it explores three very different women at various stages in their lives – and the importance of family in supporting, guiding or distancing us from what we want or need.