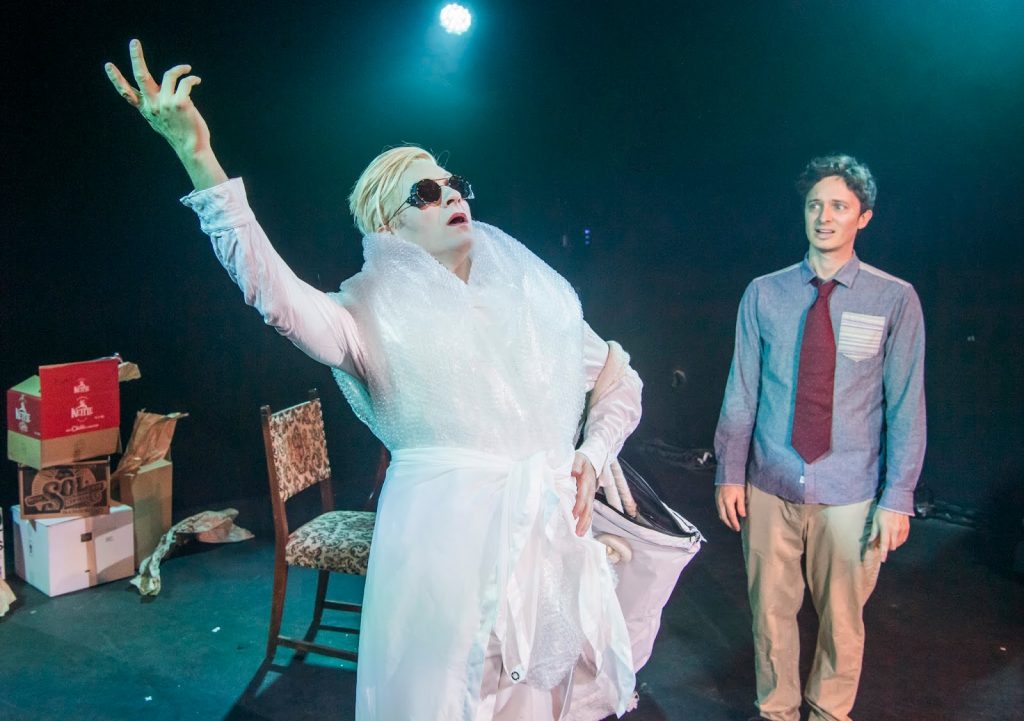 Tom Lenk reprises his role as esteemed actress Tilda Swinton in Tilda Swinton Answers an Ad on Craigslist. Positioning itself as something of a queer Mary Poppins for the actresssexual generation, this Tom Detrinis directed production is full of outlandish humour playing on Swinton’s mystique.

Byron Lane writes and stars as Walt – a depressed gay man, recently split up from his boyfriend and navigating a fractured relationship with his parents. That is until star of screen Tilda Swinton appears at his door wishing to study his sad life for a new role.

Lenk’s Swinton is a force of nature with the actor tapping into all that we love about the actress and turning it up to one hundred. Lenk turns the actress’s subtle enigmatic appeal into outlandish camp fantasy. She becomes part-alien, part-Hollywood superstar as she emerges in a bubble wrap jacket, back to front shirt, and perfectly quaffed shocking white hairdo. This high camp silliness continues with Lenk’s Swinton continually making outlandish references to her achievements both on an off screen – each more ridiculous and surreal than the next. Praise should go to straight-man Lane for the delightfully comic way he writes this monstrously camp Swinton and grounds the production as the more serious Walt.

Lane’s narrative is packed with up-to-date references of Swinton’s CV with Suspiria even getting a comic reference. Gags about the actress’s back-catalogue are interlaced throughout with a recurring cutaway where Swinton extravagantly compares those around her to characters from her career with The Chronicles of Narnia, Snowpiercer and We Need to Talk About Kevin being amusingly referenced. Whilst Lenk is fascinating to watch, it is just about enough to sustain the sixty-minute runtime without becoming tiresome.

At its heart Tilda Swinton Answers an Ad on Craigslist is a story of queer empowerment and taking control of our lives. Walt’s gradual transition from wet blanket to somewhat self confident individual channels themes of self-respect as he stands up to the figures that have taken advantage of him throughout his life.

Tilda Swinton Answers an Ad on Craigslist shines through its high camp style powered through Lenk’s extravagant lead performance. A well-intentioned positive message and an amusingly surreal narrative from Lane ensures there is fun to be had here.