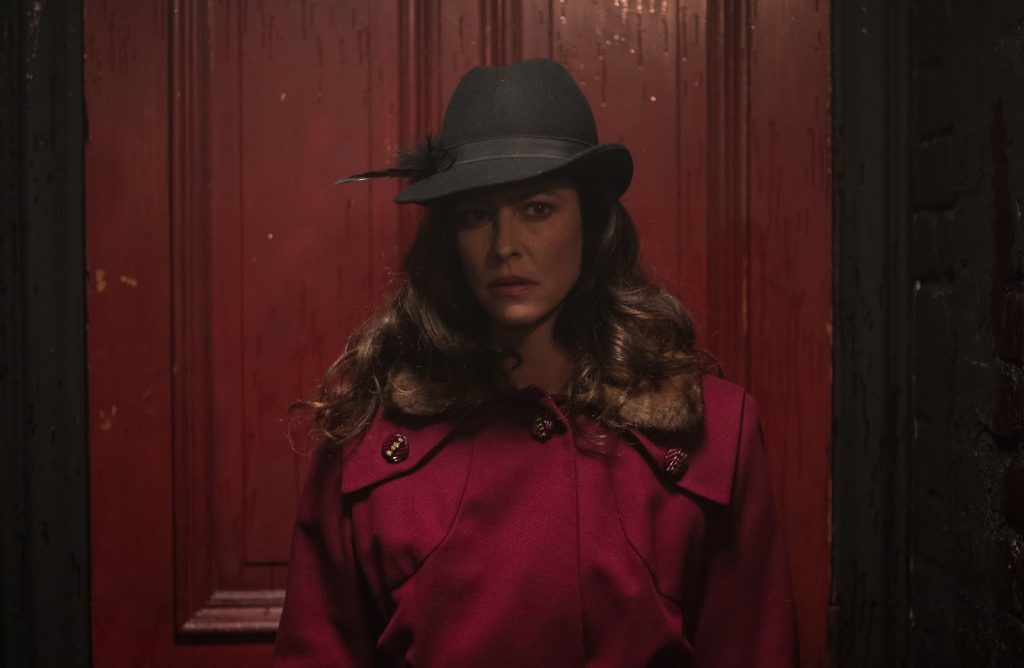 Franck Ribière directs The Most Assassinated Woman in the World, a film steeped in the traditions of Grand Guignol. This period film embraces horror aesthetics and the spectacle of guignol theatre, yet with four people involved in the screenplay, it is no surprise that there are numerous scrappy loose ends within this picture.

Paula Maxa (Anna Mougalis) is queen of the Paris’s Grand Guignol theatre – the lead in numerous plays that celebrate elaborate death, gore and the macabre – yet this ignites the rage of the city’s morally righteous residents. Matters escalate when a series of real life killings strike the city of Paris – with an eerie connection to Maxa.

Ribière’s attention to detail and celebration of campy, elaborate Guignol aesthetics reveal a real passion for the subject matter. There is excellent detail in the production from the 1930s Parisian streets to the creaking evocative theatre – delivering a near Hammer Horror inspired aesthetic. This setting makes a wonderful canvas for the horror of real life killings to unfold upon and Ribière’s depiction of these has an eerie reminiscence to London’s Jack the Ripper killings with its foggy streets and brutal butchering. Here Ribière embraces the gore to his utmost.

The Most Assassinated Woman in the World finds most of its success in its lead actress, Anna Mougalis. The actress brings a steely glamour to the fold as the wonderfully titled Grande Dame of Guignol, Paula Maxa. The theatre performances are well-acted and Mougalis can deliver quite harrowing turns as she is being sliced, hacked and dragged around the stage. These elaborate theatre scenes, paired with the brutal Ripper style killings will be sure to provide enough greasepaint and gore to the proceedings for horror fans to enjoy.

Despite an impressive aesthetic appeal and stellar central performance, the narrative that ties these together is problematic. Although it taps into a good thing with the Parisian outrage to the Guignol, the film’s screenplay seems to flip between detective thriller, serial killer horror, and least successfully, romantic drama. Not enough focus is given to any of these to fully succeed in any area – other than aesthetically – we are not hugely engaged in the killings (they are few and far between) and the attempted romance between Maxa and detective Jean (Niels Schneider) goes from zero to one hundred in very little time. A conclusion that attempts unveil several clever twists, actually unveils more confusion and is ultimately dissatisfying. Instead of hitting a searing final note, The Most Assassinated Woman in the World, falls with a whimper.