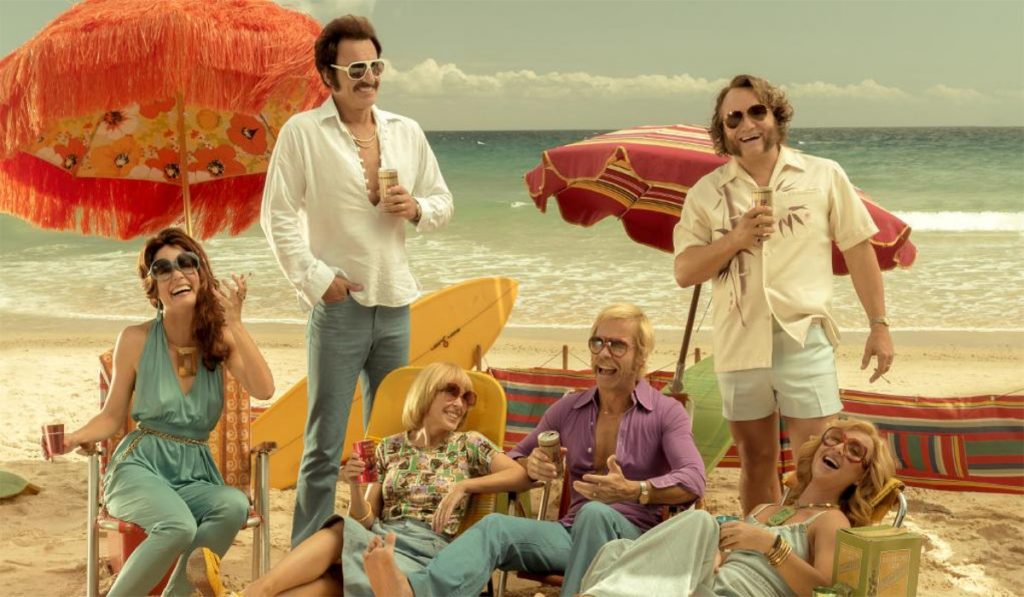 Seventies excess and debauchery are on the table for Stephan Elliott’s latest Ausploitation comedy, Flammable Children (aka Swinging Safari). This marks The Adventures of Priscilla, Queen of the Desert writer-director’s first cinematic feature since 2011’s Olivia Newton-John starrer A Few Best Men. Elliott’s trademark blend of camp and crude perfectly combine with tacky seventies aesthetics to give Flammable Children a distinct and original tone.

Inspired by Elliott’s own upbringing, Flammable Children sees a teenager come of age in a small Australian beach town in 1975. As he experiences his own battles with his teenage angst, his parents and their friends are catching up with idea of free love in the sexual revolution. Matters become more surreal when a 200 tonne blue whale washes up on the shores of the beach, becoming the talk of the town.

Elliott’s narrative (the director remarked at the Q&A that he didn’t have one) taps into a youthful erratic energy seen in the teenage protagonists and lost adult characters. Comprised of both the adult’s story – coping with a mass of brash teenage children, whilst attempting to explore their own sexuality and relive their youth; contrasted with the children’s coming of age narrative – Flammable Children allows viewers to choose their own side, whilst Elliott presents both neutrally without judgement. It seems Elliott’s main aim is to simply tap into a sense chaos with a blend of comic sight gags, recreations of his own Super Eight films from his youth, and carnivalesque silliness.

Positioning itself as an Australian equivalent to the likes of John Waters’ celebration of excess, A Dirty Shame, there are numerous moments of well-orchestrated comedy in this loose-moralled tale. Elliott’s erratic direction and specific brash Aussie humour gives Flammable Children a raucous period energy – blending physical comedy and quick one-liners (one of the premiere sight gags sees a Colonel Sanders logo burned onto a child early on, whilst a conclusion bathed in whale guts furthers the grotesquery). This excess and debauchery put into the setting of sun-baked seventies Australia – paired with set design (filled with K-Tel products), wonderfully flared costumes, and seventies decor – gives Flammable Children a unique high energy aesthetic and tone.

This celebration of Aussie identity owes much of its success to several incredibly game cast performances. Lead by Kylie Minogue and Guy Pearce, the pair shine as a feuding Aussie couple – driven to their own vices – particularly Minogue’s steely Kaye and her penchant for the drink. Radha Mitchell and Julian McMahon excel as the Jones’s – a couple who try and mask their problems with the latest high tech seventies gadgetry. A strong central performance from Atticus Robb as Jeff (a young Elliott) brings some sincere heart to the production. A soundtrack of seventies classics, plus Minogue’s cover of Chirpy Chirpy Cheep Cheep, completes this seventies aesthetic.

Flammable Children is a boisterous, high energy watch that delights itself in celebrating the grotesque, kitsch and excessive. Brash Aussie humour and entirely game performances ensure there is incredible fun to be had with Elliott’s latest.