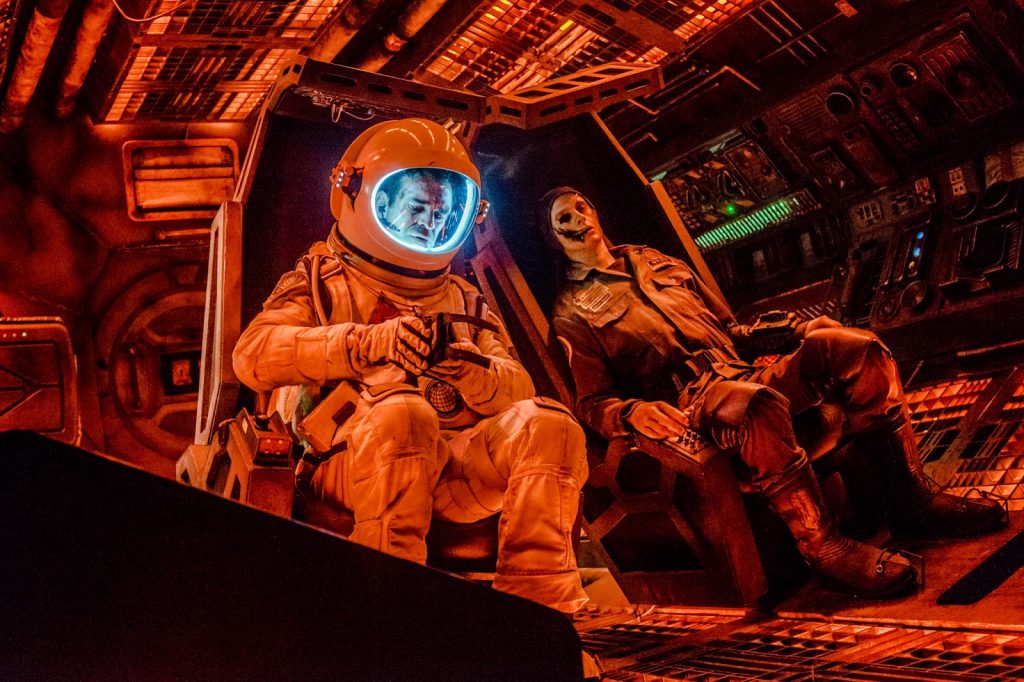 Playing out like Gravity on a budget, Solis, joins a slew of space survival films, but its prescriptive narrative ultimately has very little to say. The debut feature from writer-director from Carl Strathie also struggles through its single-man cast and lack of dramatic tension.


Steven Ogg plays Troy Holloway, who wakes us to see catastrophic damage has been done to his space escape pod which is now heading towards the sun. With rapid oxygen depletion and the growing heat, Holloway must attempt to control his situation until Commander Roberts (Alice Lowe in voice form) can rescue him.


Strathie and the film’s production/set designers do an impressive job at crafting the pod’s futuristic industrial aesthetic. The pod has a jarring claustrophobic atmosphere that Strathie heightens using close-ups and limited space – this feels professional, and well-crafted. Yet the exterior shots of the pod floating through space can sometimes let the project down – never looking pristine or realistic enough to convince.


Solis’ narrative suffers from a similar lack of conviction due to its prescriptive style. Strathie sets up each narrative turn and challenge for Holloway with such clinical preparation that we can see every move of Solis unfolding before it has had time to happen. Typical tropes of the genre: the decaying ship, uncontrollable temperatures (intense heat and cold), communication issues, lack of oxygen, asteroid showers, amongst countless others fall into place into Solis. It’s straight forward, industrious science fiction that does not particularly excite or thrill.


Similarly the single character set-up of Solis calls for an actor with greater screen presence than Ogg. Despite doing his best with the film’s expected tropes, the character is not interesting enough to captive our attention for the ninety-odd minute runtime – and a half-hearted emotional backstory does not help with this. Attempts to build the character come in the form of the calls to Lowe’s Commander Roberts – a character who starts off steely, yet mellows quickly without much cause, does not quite pay off.


There are some well executed special effects and rare moments of well-mounted tension, but Solis never quite invests us in its story due to its prescriptive narrative and flat central character.