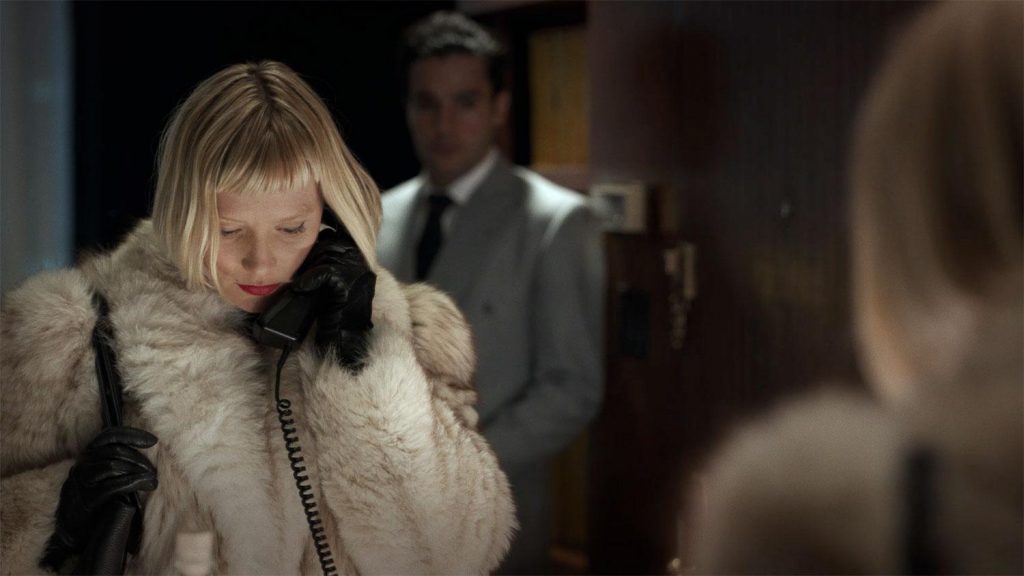 After the utterly devastating horror of The Eyes of My Mother, filmmaker Nicolas Pesce turns his attention to cult Japanese novel, Piercing, from Ryū Murakami. This efficient eighty-one minute body horror sees Pesce lay out his stylistic influences whilst exploring psycho-sexual thrills.

In the hope of ridding himself of the desire to kill his baby, Reed (Christopher Abbott) organises an unusual business trip. He plans to murder call girl, Jackie (Mia Wasikowska), as a means of freeing himself from these influences, however, this is not something that goes to plan.

Pesce crafts an aesthetic of seventies sleaze from as early as Piercing’s opening credits -shot with a grainy VHS quality. The filmmaker uses miniatures to create a dreamlike cityscape of New York and a pulsating synth score – a huge departure for those aware of the sparse, quiet black and white of The Eyes of My Mother. Yet this setting and aesthetic of De Palma-esque New York sleaze is perfect for this tale that mixes body horror, sadomasochism and unhinged sexuality. Aesthetically, Piercing is one of the most exciting film’s of the year in terms of its sheer unflinching attraction to the graphic and gory, as well as its heightened seventies styling  and Lynchian dream sequences. Packed with music from the world of giallo: Goblin and Morricone, Piercing gains further stylistic credibility.

With an eighty minute runtime, it is to be expected that Piercing is a punchy and swift watch. This narrative also has a quickness – seen in its wry black comedy (an introduction that begins with a baby speaking in demonic voices sets the tone immediately) and rapid narrative pace. Pesce’s film is one of three distinct acts – the first which sees Reed and his attempt to dispose of Jackie, the second, their curious bond, and the third which sees a rapid power switch as things head into Leopold von Sacher-Masoch territory.

Set in sleek interiors packed with stylish furnishings of dark wood and bold colourings, Piercing embarks on its psychosexual conquest, bringing a bloody brutality to these gorgeous locations. With Cronenberg level body horror and practical effects – scissors and ice picks are impaled – we soon see these deranged individuals embarking on a messy sadomasochistic relationship – feeding off each other’s physical pain and mental pain. These are characters that perplex – their intentions are confusing and unsettling – and Abbott and Wasikowska portray this with an intriguing intensity. Abbott’s fractured performance captures a man who has lost his grip on reality, whilst Wasikowska brings an alluring sweetness that’s counteracted with a straight-faced insanity.

Piercing is a cinematic assault that firmly establishes Pesce as one of the genre’s most exciting filmmakers. This twisted psycho-sexual body horror amuses with its obscene black comedy, repels with its gruesome brutality, and entrances with its aesthetic bravado.