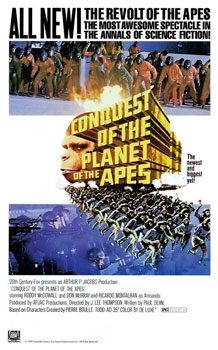 Roddy McDowall once again returns to the series, this time in the role of Caesar (He just loved wearing that monkey make-up!). Again, his acting is excellent – bring his usual thespian charm to the role, as well as completely anchoring the film. Here we see a society where a disease has killed all cats and dogs, leaving humans to buy apes as pets, as they adapt they are treated as slaves by the humans.

It’s clear from the onset that the series’ budget has gotten lower per film, with Conquest being made on a budget of $1.8 million. And the film suffers from this, given how the world was taken over by apes is such a huge concept to explore. Despite this, J. Lee Thompson still directs with great professionalism, however, the film does not have the charm of the previous entries. Budget constraints have the futuristic city looking very cliched and a bit lackluster, as well as the decision to shoot in Todd-AO instead of Panavision, meaning the film has aged rather poorly.

Once again, the social commentary continues but you can’t help but feeling we’ve heard it all before in the previous entries. Although, when we see lots of apes running around brandishing guns, starting fires and battering riot police, you can’t help but smile.

And here it is: Battle For The Planet of the Apes 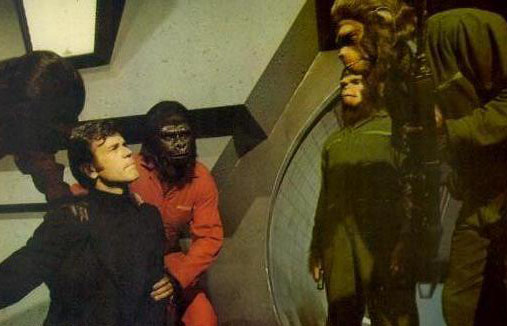 Tags: Conquest Of The Planet Of The Apes, Features, Retrospective