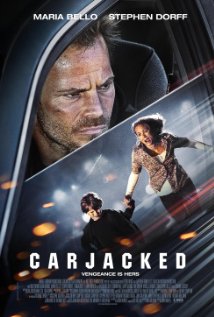 Stephen Dorff’s never been busier following his outstanding performance of Sofia Coppola’s Somewhere last year. All of the eight project’s that he’s currently working on sound interesting from the sword and sandals epic, Immortals to road movie, The Motel Life. However it’s action-thriller, Carjacked, that’s caught my attention.

Mario Bello stars as a struggling single mother on her way to a grocery store with her 8 year old son. On route, they are carjacked by a bank robber (Stephen Dorff) who forces them to drive him to retrieve his share of a bank heist takings. The mother and her child face a desperate struggle for freedom from this dangerous robber.

Whilst this may not be the most original plot, I’m confident that with the talents of the superb Maria Bello (A History of Violence, Thank You For Smoking) and the sublime Stephen Dorff, we’ll get a fantastic edge of your seat action movie. Director, John Bonito, who did an excellent job on the fun action movie The Marine, looks set to repear his winning formula with Carjacked.

The second poster (below) is giving me Death Wish vibes, which hopefully indicated that the film will be part revenge flick with Bello getting to kick some ass!

Carjacked has recently been picked up by Anchor Bay for an ‘immediate release’ (which I presume means direct to video) for sometime in 2011.