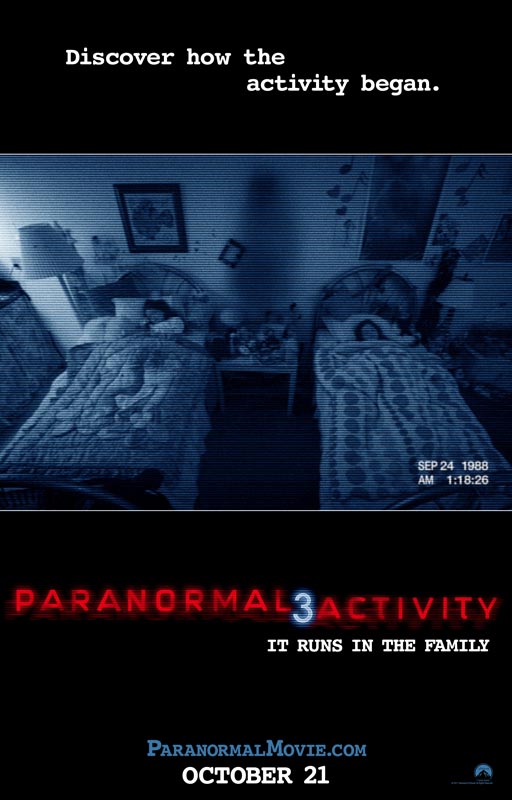 It seems with the absence of the Saw series that Paramount Pictures have found something to plug the annual Halloween-horror market in Paranormal Activity. The third entry into the series takes us back to the late 1980’s focusing on the early childhood Katie and Kristi (the two sisters from the previous films) and their first encounter with the paranormal.
By this point, you may be thinking that you’ve seen it all before in the previous two films and chances are you have. Paranormal Activity 3 adds little originality to the series and now the scares aren’t AS effective as they have been been earlier. However, that’s not to say the film isn’t effective or isn’t worth seeing. Although it may not be as scary as the earlier efforts, it still remains hugely suspenseful and that build of tension is a points incredibly difficult to watch.
The direction still retains the infamous handheld camera technique with frequent sharp turns round corners and night vision shots which all successfully add to the tension. There’s some fairly interesting albeit slightly predictable new elements like the inclusion of a cult with an ending slightly reminiscent of the Eli Roth produced, The Last Exorcism. There’s some much needed touches of humour and comic relief – particularly in the form of the character Randy, Paranormal Activity‘s first sex tape and the sinister children’s toy, Teddy Ruxpin (who unfortunately does not star in the sex tape). 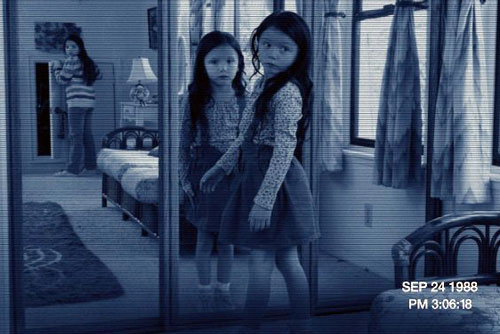 The acting is fairly solid with some extremely talented and convincing young actresses – Chloe Csengery and Jessica Tyler Brown in the roles of young Katie and Kristi. Lauren Bittner and Christopher Nicholas Smith also fit into the parental roles quite nicely, although these feel like the exact same characters from the previous entries into the series.
Paranormal Activity 3 seals off the trilogy well, but there are questions left unanswered which I’m sure will be addressed next year with Paranormal Activity 4 next Halloween. It may feel like it’s been done before, but it’s a fun and incredibly tense watch and I’d happily see another addition to the series.