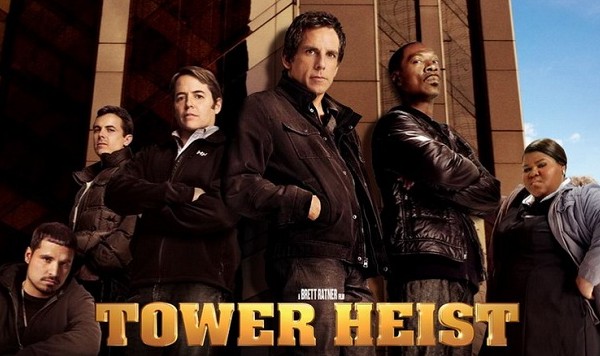 Brett Ratner’s latest comedy, Tower Heist, tells us the story of several employees of an exclusive New York apartment building who discovered all their invested pensions have been lost in a corrupt businessman’s scheme.  A group of these employees set out to steal their money back with the aid of a petty criminal and a broke Wall Street investor.

Tower Heist is a typical Brett Ratner offering, it’s not demanding viewing or particularly engaging, although it does have moments of humour and suspense. I’m sure the idea of the loveable ‘ordinary stiffs’ getting their own back on the ‘fat cat bankers’ is quite a crowd pleaser due to the financial situation of the world today and  it does give the film a nice emotive backbone, however, never relies on this too heavily. For the most part, Tower Heist feels generic – the actual heist scenes felt like they’ve all been done before and better in the Oceans Series (or even the little seen recent Christopher Walken film, The Maiden Heist), although their is the occasional moment of well directed suspense from Ratner.

Considering the talent of the cast involved, I was expecting Tower Heist to be funnier. The talented Ben Stiller feels slightly wasted and doesn’t get much opportunity to show off his comedic skill, with this slightly dull grounded character. This also seems to be hailed as Eddie Murphy’s big comeback, which must be the overstatement of the year – Murphy has a few laughs but nothing on the level of his finest turns in Bowfinger etc. I was also annoyed at Matthew Broderick’s character in this – Broderick’s a great actor but he seems to have been locked in this man-baby type role which isn’t particularly funny to watch (apart from one scene where he calls everyone “Bitch”). The real highlights for me were Casey Affleck and Alan Alda – Affleck handles his character’s deadpan humour well and manages to shine ahead of some well-respected comic actors. Alda is always a pleasure to watch, even though little depth is given to his character. Tea Leoni, Michael Pena and Gabourey Sidibe also appear in quite amusing supporting roles.

Tower Heist is below average, mindless entertainment. The script although featuring a few moments of suspense in the heist scenes, doesn’t cut it comically and a talented cast feels wasted. If you miss it you’re not missing much but if you find yourself with a free night, there’s worse things you could do than see this.