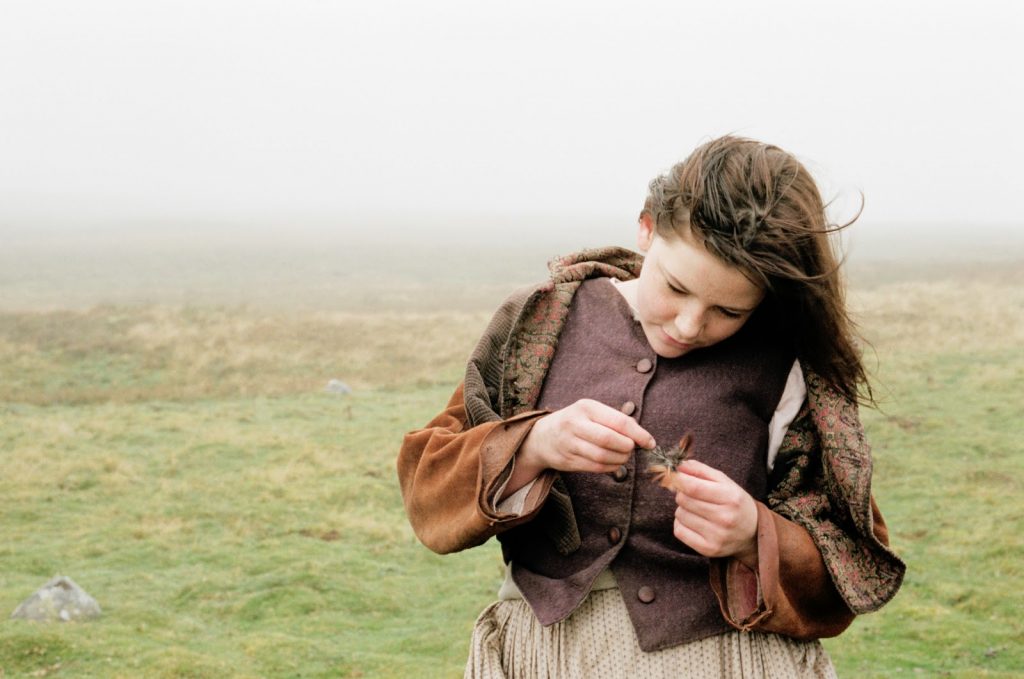 Andrea Arnold presents us with a stark and distinctive take on the costume drama in her latest feature, Wuthering Heights. Here we see Emily Bronte’s doomed love story stripped to it’s bare bones with not one Kate Bush track in sight. Arnold makes some slight changes from the novel and tells the story of young boy Heathcliff who is taken in by the Yorkshire Moors based Earnshaw family, here he develops an intense relationship with the family’s daughter, Cathy. Arnold explores this relationship from it’s early stages to Heathcliff and Cathy as adults.

This was my first experience of viewing one of Arnold’s films and I was immediately struck by the director’s intense style. She truly awakens all of the senses in Wuthering Heights, exploring the story through touch, sight and sound. Distinctive close-ups on hands, objects and textures, drew me into the film completely – small things like branches scratching against the window panes of the decaying family home become captivating. Sounds that would normally be glazed over in other films, suddenly take a life of their own and Arnold truly makes the setting of  ‘the wiley, windy moors’ (Thanks Kate) into a character itself. Arnold’s focus on the senses really helped break the story down to it’s bare roots and make Wuthering Heights a one of a kind experience for me, style-wise.

By making the character of Heathcliff black, Arnold adds an interesting new dynamic to the film in it’s exploration of racial tension. This also brought a slight contemporary edge to the Bronte’s classic story and seeing him ill-treated by Cathy’s brother for these reasons, draws us closer to Heathcliff. Despite this initial draw to the character, it soon faded for me and at times I could not help feeling that Wuthering Heights was a case of style over substance. At occasional points, I found it difficult to connect with the characters, for example, Heathcliff’s intense emotions at the end felt incredibly unrealistic to me, had Arnold toned these down slightly it may have had a stronger impact – sometimes less is more.

For the most part, Wuthering Heights is an hugely emotive piece – the relationship between Heathcliff and Cathy is build up with terrific young actors Solomon Glave and Shannor Beer, who’s performances are both faultless. Arnold smoothly transides into the future where we are shown how time has changed the relationship between the pair and the acting remains at a high standard with performances from James Howson and Kaya Scodelario.

Wuthering Heights’ brutal and raw arthouse take on the story may diminish its appeal to fans of typical costume dramas but it’s hard to deny her distinct talent as a filmmaker. Whilst the film may not always connect  emotionally, its powerful and stirring visual style and direction certainly make it a worthwhile watch