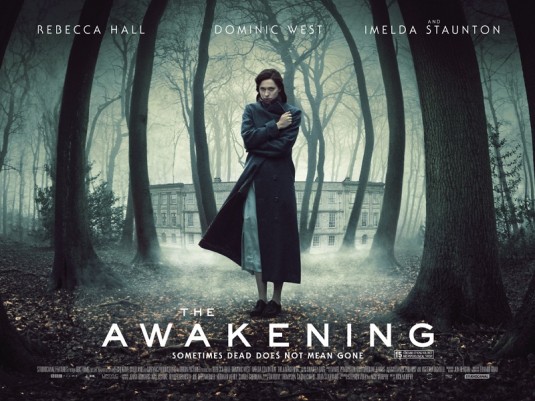 For those seeking a ghostly alternative to the Paranormal Activity series, director Nick Murphy’s The Awakening, might be the perfect solution for you. This 1920’s set British horror tells us paranormal hoax exposer, Florence Cathcart (Rebecca Hall), who is sent to explain supposed ghost sightings at an all boys boarding school.

The Awakening is a stellar old fashioned ghost story – putting it crassly it’s Downton Abbey meets Paranormal Activity. Nick Murphy directs competently, sticking to prominent techniques of the genre like slow turns round corners and point of view shots, creating a very creepy atmosphere. It’s also incredibly well written by Murphy and co-writer, Stephen Volk – the characters are fleshed out and interesting and the slow build up of tension throughout the script is excellent.

The character of Florence Cathcart is one of my favourite protagonists in recent horror cinema. Rebecca Hall breathes so much life and energy into the character, making it truly her own. She’s an intelligent young woman with a troubled past which is slowly developed throughout – she’s also a beautiful ghost hunter, what’s not to like? The transition of the character from firm sceptic to someone forced to question their beliefs, may feel like a common feature in contemporary horror cinema but this is handled in an engaging and quite chilling manner throughout The Awakening, never feeling tired or cheap.

Although it does have some creepy moments, the film is never truly scary – The Awakening is not going to keep anyone awake at night, despite some well handled scares. Fortunately, the story and acting is good enough to simply make do with being creepy and still be incredibly watchable throughout. The Awakening has a wonderful nostalgic charm that harks back to earlier British horror like Hammer Film’s productions. There’s also a look at wider context of the time with Murphy capturing the broken nature of Britain after the First World War, showing people have still not recovered – Cathcart from her love killed in the war and Dominic West’s character scarred by the horrors of war. A connection between the ghosts of war that haunt the country and alleged real ghosts, help the film touch on some interesting ideas. Despite the serious atmosphere, The Awakening does at points show a playful look at the outdated views of the times, for instance one scene where the schools headmaster states ‘I read a study that stated women’s brains could not cope with further education’. Moments like these, made the character of Florence more noticeable- she’s a university educated woman in a male dominated world, who’s out to prove herself.

The casting is excellent with Rebecca Hall completely standing out in the lead, this is by far the finest performance of her career (and surely to be overlooked because it’s a genre film) – it’s truly faultless. Dominic Purcell is also a welcome addition to the cast and shines as the teacher haunted by his wartime experiences. There is also an interesting supporting performance from Imelda Staunton as the school Matron, there’s an intriguing air of mystery built up around the surrounds character which provides the viewer with some puzzles throughout.

The Awakening is a stellar British chiller with an outstanding lead performance from Rebecca Hall. It’s a well-written and directed with a chilling atmosphere but the scares are unlikely satisfy most hardcore horror. Although, in my opinion it’s one of the most entertaining ghost stories in a long time.
Rating: 4/5