The Girl Who Jumped Off The Hollywood SignRating: ★★★★Venue: Assembly George Square StudiousTickets 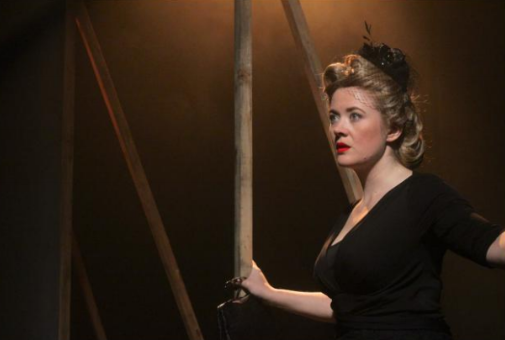 Joanne Hartstone writes and leads The Girl Who Jumped Off the Hollywood Sign, a bittersweet glimpse into the broken dreams of a would-be starlet in post-war Hollywood. This one woman show mixes music and monologue as it crafts a sense of classic Hollywood nostalgia, whilst capturing the cutthroat nature of the town.

Evelyn Margaret Edwards climbs the fifty-foot Hollywood sign with the intention of ending it all. Hartstone’s play traces back through the events that lead to this potentially fatal turn of events exploring: her relationship with her hard gambling father, her work at the Hollywood café entertaining the troops, and Evelyn’s struggles through the audition process.

Hartstone has crafted a fully realised character in Evelyn – everything about her oozes a sheer devotion to the path of stardom (her chipper voice, can-do attitude, and love for the genre), yet Hartstone balances this performance with a bittersweet acceptance that this is unlikely to be case with continual setback swiping the young woman. Evelyn’s stories of Jean Harlow’s peroxide poisoning and Judy Garland’s breakdown set the melancholic tone that we see echoing throughout her own attempts to become a star, whilst simultaneously crafting a sad Hollywood nostalgia. It may be the town where dreams are made, but countless others are crushed on the way.

The actress and playwright is costumed with a fifties elegance and delivers lines in the chipper, melodramatic fashion that we’re accustomed to seeing stars of yesteryear perform. This nostalgia is furthered in numerous breezy musical performances which further transport us to the period. Simple set design of the H of the Hollywood Hills sign makes the canvas for Evelyn’s reflective piece – where her questions about not having the “it factor” drive her to question her place on Earth.

Whilst this is one woman’s story, there is a contemporary resonance lurking here – how many naïve girls like Evie Edwards have been tempted by the faux allure of Hollywood during and since Hollywood Golden Age? This is a compelling piece that provides plenty food for thought.