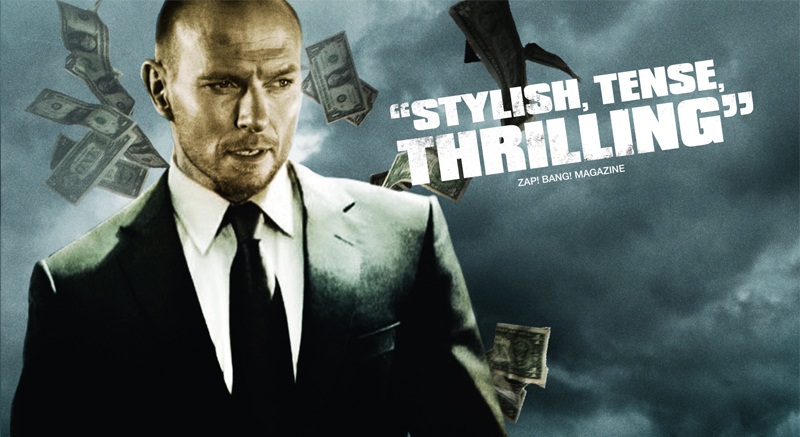 It’s never going to be easy changing career paths from singing to acting, but some stars have been lucky – Mark Wahlberg, Jennifer Lopez and even Frank Sinatra are but a few. However most are not so lucky – just ask Prince or Madonna. It seems after his recent batch of film choices, that former half of Brit boyband Bros, Luke Goss looks set to join the latter. Crime thriller, Pressed is the latest direct-to-video release to star Mr. Goss and sees him team up with first time director, Justin Donnelly.

The film follow business executive, Brian (played by Goss) who has been let go from his job and is facing a financial mess. He soon decides to invest his remaining savings in a risky, short term drug deal that will hopefully end his financial woes. Unfortunately for poor Brian, his saving are stolen by two young joyriders, unaware of how dangerous the situation is.

The opening off Pressed is incredibly gripping – we see Goss’ character digging a grave in a darkened area of desert wasteland, I’m intrigued (maybe he’s murdered his agent?). However, this interest is soon diminished as the film flashes back to the events prior to this and the pacing becomes tedious. Goss’ character is set up as the perfect family with all the cliché ridden symbols from phone calls to his wife to pictures hanging on the wall – nothing about this character feels fresh or original.

Pressed then proceeds to spend around an hour simply showing the character lose his job and sit in a bar – it’s monotonous. At a dull one hour forty minutes, it may have benefited from being twenty minutes shorter and with less focus on the events prior to Brian’s money being stolen. Small moments of interest do gradually appear, such as Brian’s tense encounter with an inquisitive cop whilst he’s harbouring a body in the boot of his car. However, these little moments of suspense and excitement do not come often enough as Pressed soon continues to trundle along.

As the film continues we are later introduced to two of the most unconvincing joy riders on the planet – these kids don’t look like they’d be able to get in a car without a booster seat, let alone steal one. Fortunately, Luke Goss is on hand to bring a reasonable amount of charisma to this flat role, but it’s far more entertaining to watch him in the likes of the enjoyable Death Race 2 or even just listen to a copy of When Will I Be Famous?

Pressed is void of any distinct visual style, feeling generic and ultimately forgettable. With its slow pacing and lack of convincing characters it’s really not worth the bother of watching.