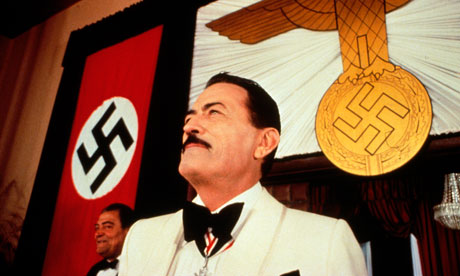 The Boys From Brazil is an interesting film – it has all the elements of a B-movie but a stellar cast including Gregory Peck, Laurence Olivier and James Mason and Franklin J, Schaffner’s intelligent direction, prevent it from being so. Based on Ira Levin’s (Deathtrap, Rosemary’s Baby) novel the film focuses on a rather preposterous concept involving the infamous Nazi, Dr. Josef Mengele (Peck) hiding in Paraguay and launching a plan to restore the Third Reich by making Hitler clones. However, aging Nazi hunter Ezra Lieberman (Olivier) is on his tail.

There’s no getting away from the fact this is a silly plot but for me personally, I’ve always found the concept of the Nazi’s post-war activities rather intriguing – in particular Mengele, who lived for another 34 years after the end of WWII. And it’s Gregory Peck’s performance as Mengele that really brings the film too life – this is his Mommie Dearest. The thick German accent, the extravagant hand gestures and the sheer power of his performance makes this without question, the most interesting of his career. To add further credibility to The Boys From Brazil, we have an utterly convincing turn from Laurence Olivier – who was even nominated for an Academy Award for the role. There’s a playful ‘out-acting’ situation when Olivier and Peck share the screen, which makes from tremendous viewing, seeing these two cinematic icons going for it. This is even leads to a nail-biting fight sequence between the pair in the film’s conclusion – I bet you never thought you would see this two thesps, hands round each others necks, covered in blood – it needs to be seen to be believed. 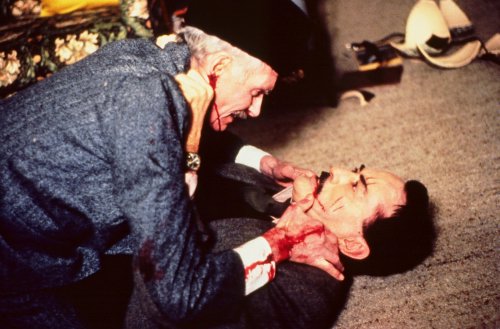 This is truly creative filmmaking at its best. Schnaffer’s film encompasses several genres – with elements of war cinema, the horror film, detective mystery and sci-fi/conspiracy. It’s unfortunate that the film feels so overlooked now – whilst you may feel the concept is slightly ridiculous, when you begin watching Schaffner’s suspenseful direction and Olivier and Peck’s powerhouse performances truly draw you in, making this unmissable viewing.

What more do you need? Well it may even give you a little laugh at points – Peck is at his most over the top at at Nazi meeting sequence and attacks other guests. Peck utters the unforgettable lines “I am a doctor, idiot!” and “Shut up, you ugly bitch” Seeing the star in a role like this is one of the main joys of the highly underrated forgotten classic, The Boys From Brazil (Which you can buy here).