Al Pacino’s casting in the Adam Sandler film, Jack & Jill came as a huge surprise to me. Don’t get me wrong, I love the guy and I’ll watch anything he stars in but it does make me a bit sad to think that an acting icon, is now starring in a film where Adam Sandler cross dresses and makes fart jokes (or so I’m lead to believe). I’ve yet to see Jack & Jill so I suppose I should not judge – after all, I’ll happily admit to enjoying seeing cinema legends: Harvey Keitel, Jack Nicholson, Christopher Walken & Burt Reynolds, star alongside Sandler throughout his career. So in honor of Al’s selling of his soul to the devil  appearance, here are some of his best, worst and generally most interesting performances – most of which will hopefully come as a surprise to you. * 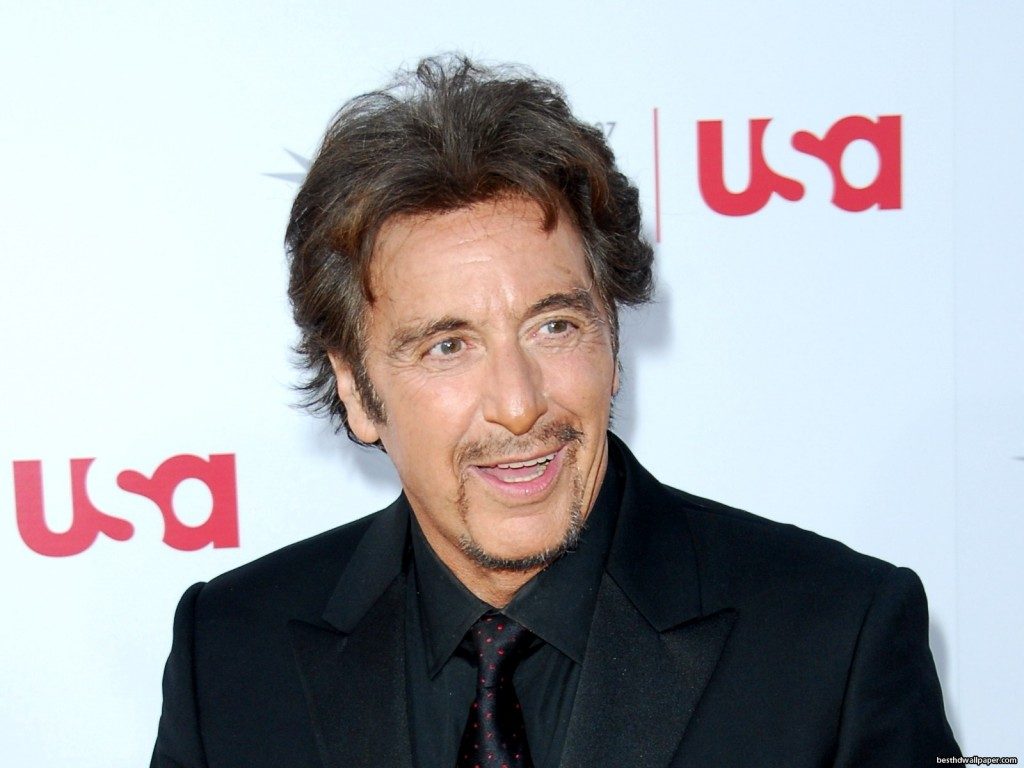 CRUISING (1980)
A NY detective goes undercover in the city’s gay + S&M scene to catch a serial killer targeting homosexual men.
Co-stars: Paul Sorvino & Karen Allen
Reception: Hugely negative from gay-rights activists and moderate critical reception
Al’s Mood: Curious, but tinged with a little homophobia
Verdict: An intriguing look at a ‘mainstream’ perception of what late 1970s/ early 1980s gay lifestyle was like. If you try and ignore the blatant homophobic stereotypes, it’s actually watchable and Pacino brings a certain credibility to the role. 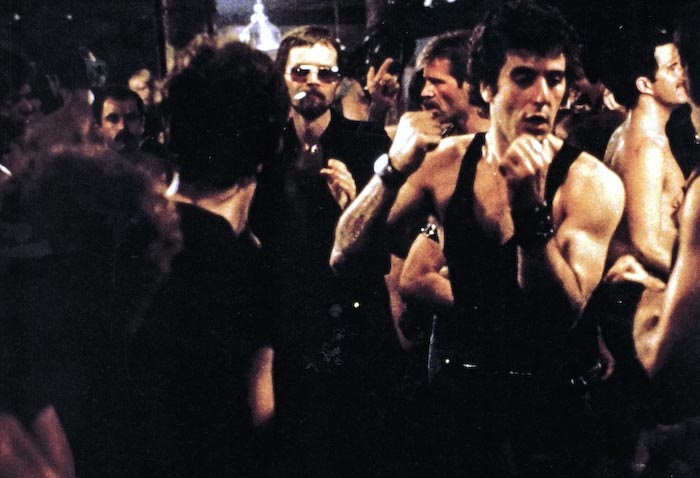 Not a film about a man who smells women, but a tale of an extravagant blind man who hires a young college student to look after him over the Thanksgiving weekend.
Co-stars: Chris O’Donnell
Reception: Oscar win for Al and impressive box office takings.
Al’s Mood: Hammy/blind
Verdict: Dodgy script which suffers from it’s over-conventionality but Al is on terrific scene chewing form – it’s all quite sweet really. 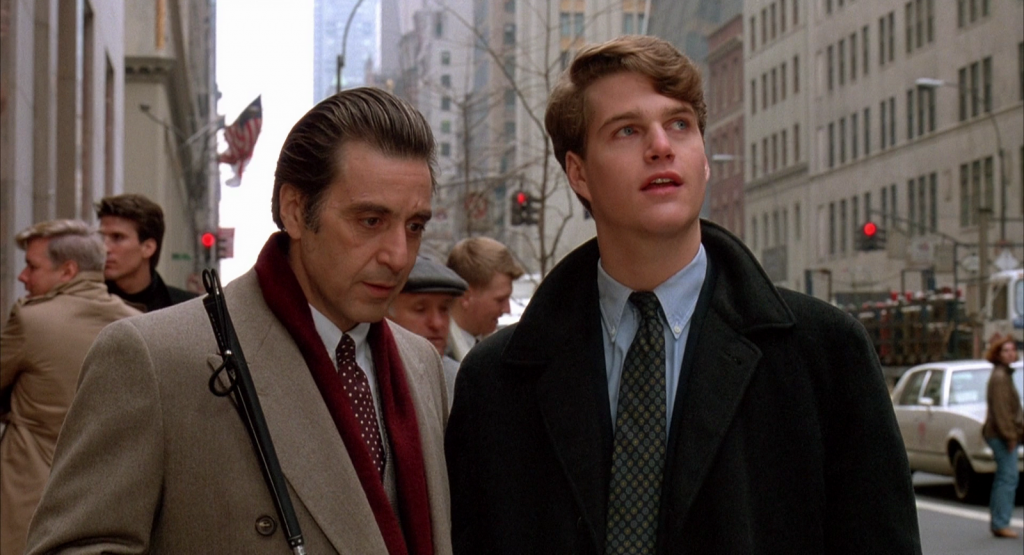 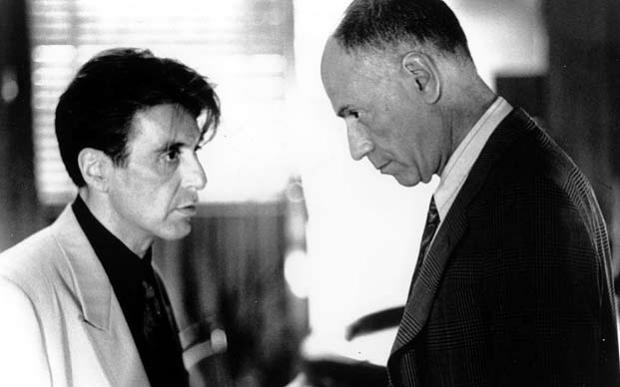 A top lawyer from an evangelical background picks up a position working for the devil. Expect some moral challenges…
Co-stars: Keanu Reeves (sigh) and Charlize Theron
Reception: Critical reaction divided but financial success.
Al’s Mood: Cheeky demon
Verdict: Whilst not as enjoyable as it should be, the combination of courtroom drama and supernatural-chiller works for me. Pacino is on solid form, and it’s a refreshing change to see him dabble in the horror genre. 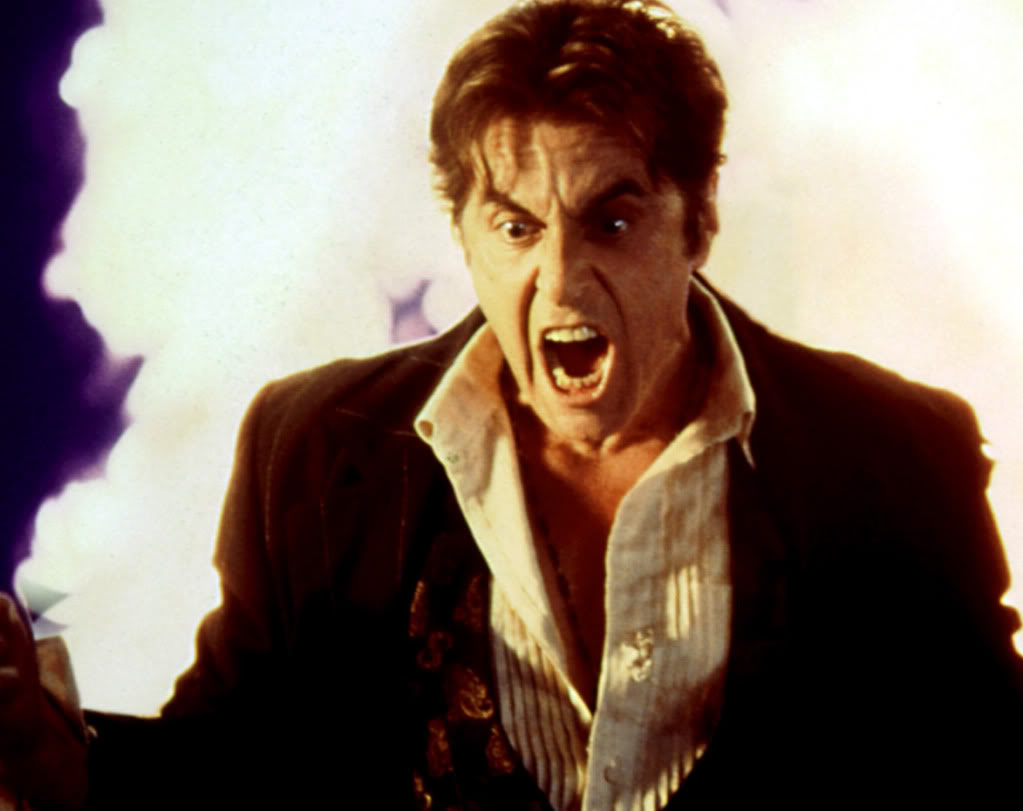 S1M0NE (2002)
After a film producers’ star walks of set, she is replaced by a digital substitute which becomes a massive star.
Co-stars: Catherine Keener, Rebecca Romijin & Winona Ryder
Reception: Mixed reception from critics, leaning towards negative.
Al’s Mood: Lighthearted and highly comic.
Verdict: Definitely one of Pacino’s more interesting roles in recent years, this is fairly humorous satire despite becoming less believable as the plot goes on. 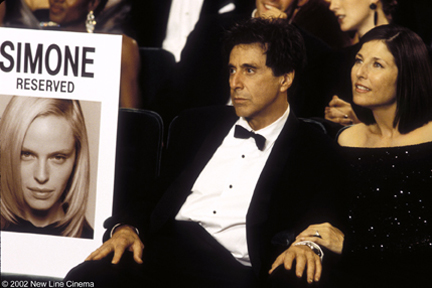 Two LA detectives are sent to Alaska to investigate the murder of a local teen.
Co-stars: Robin Williams & Hilary Swank
Reception: Critical and box office success.
Al’s Mood: Generally fucked up, could do with a nap.
Verdict: I’m in the minority that retains this is Christopher Nolan’s finest work – its a tense, paranoia-infused, psychological thriller that grips from start to finish. 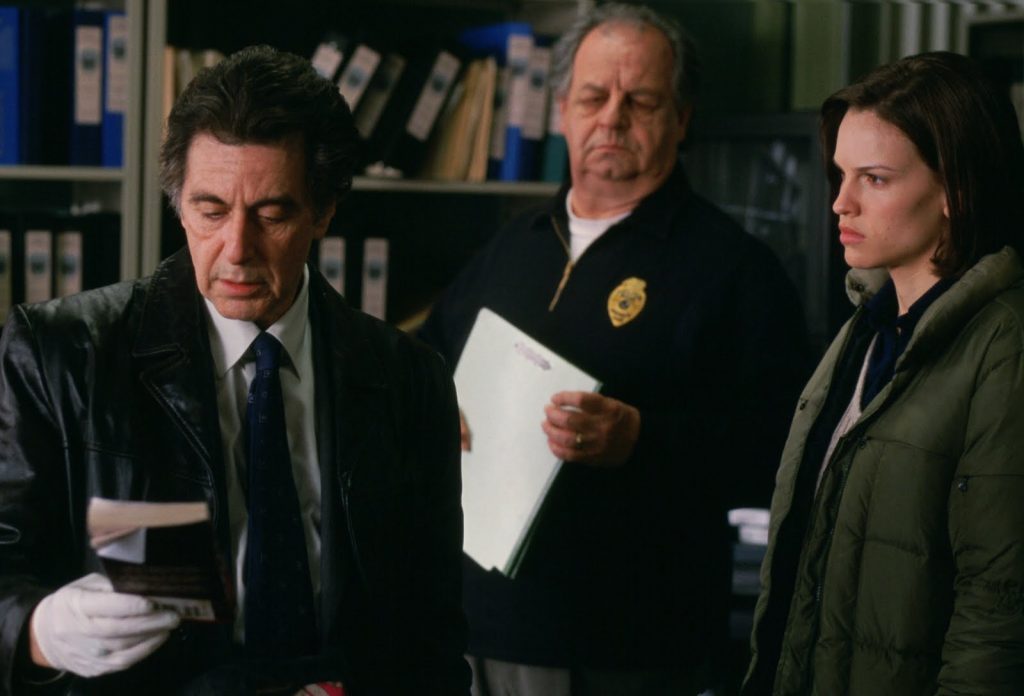 ANGELS IN AMERICA (2003)
Mini-series looking at the outbreak of the AIDS crisis in 1980s America.
Co-stars: Emma Thompson, Meryl Streep & Jeffrey Wright
Reception: Stormed the Golden Globes and Emmys
Al’s Mood: Shouty and a little gay, but darling, doesn’t he know his Broadway shows.
Verdict: Angels In America is nothing short of a masterpiece. It’s visually breathtaking, filled with complex characters, light touches humour yet still manages to be one of the most moving and thought-provoking pieces of drama in recent years. The casting of Streep, Thompson and Pacino is straight away a sure fire sign of its astounding quality. 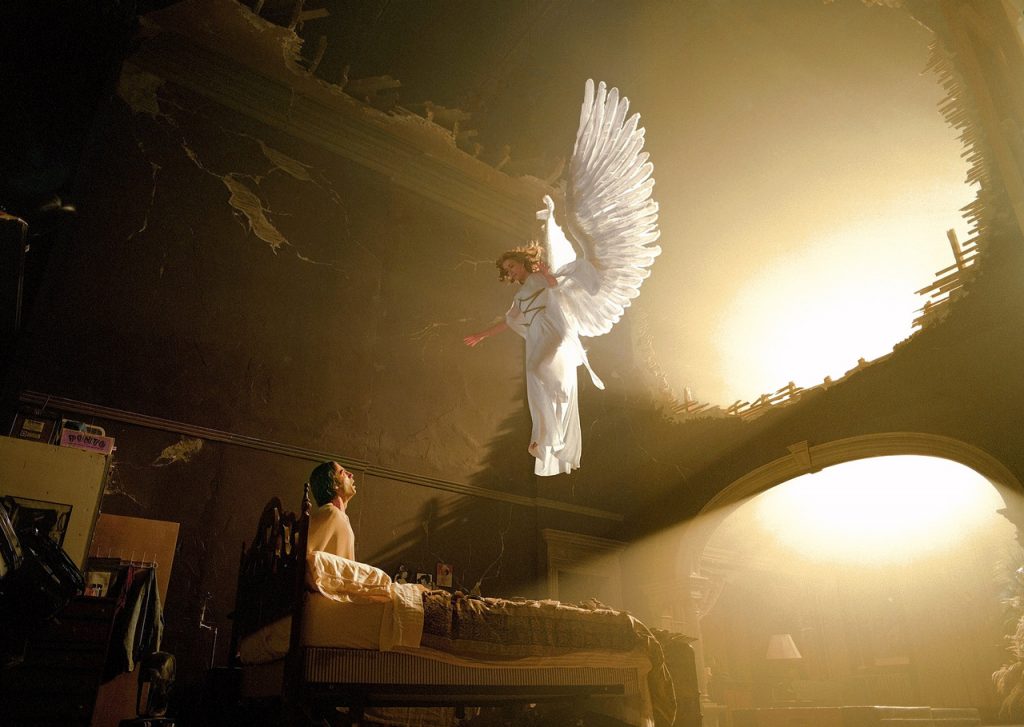 GIGLI (2003)
Something about a hitman, lesbian, special needs bloke and an inept criminal, I’m not even going to bother…
Co-stars: Ben Affleck, Jennifer Lopez (Al’s greatest acting competition) & Christopher Walken
Reception: Mega-flop – hated by critics, hated by the audience.
Al’s Mood: Ashamed
Verdict: Unfortunately appearances from Al & Christopher Walken aren’t enough to save this hot mess of a film. I still like Ben Affleck though, it was all J-Lo’s fault, making the poor guy believe that she could act. 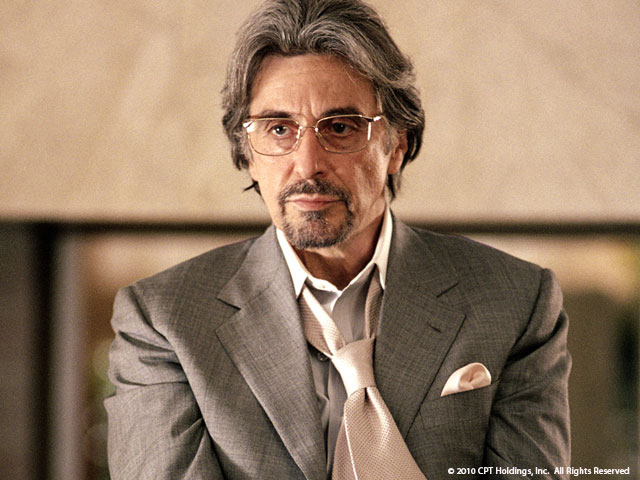 WILLIAM SHAKESPEARE’S THE MERCHANT OF VENICE (2004)
A 16th century merchant must pay back a large loan to a vengeful creditor, who demands an unpleasant alternative to money.
Co-stars: Joseph Fiennes, Jeremy Irons & Lynn Collins
Reception: Reaction to film was mixed but Pacino’s performance was praised. Box office flop.
Al’s Mood: Hungry for a pound of flesh
Verdict: Gripping and a pleasantly surprising adaptation of Shakespeare’s text. 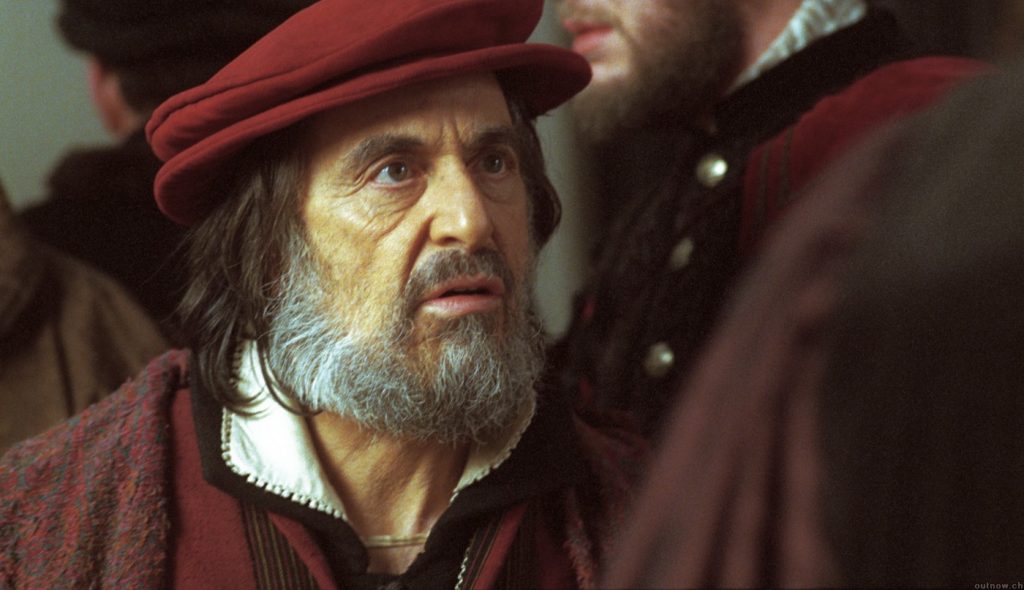 The team are back to seek revenge on a casino owner who double crosses one of the team.
Co-stars: Brad Pitt, George Clooney & Matt Damon
Reception: Critics fairly positive, box office success. Not as good as the Rat Pack Original or first in the new series, but far superior to Oceans Twelve. The lack of Julia Roberts also helps.
Al’s Mood: Wondering how long till his salary gets into his bank account
Verdict: Oceans Thirteen is perfectly fun viewing, Pacino is a worthwhile addition to the cast and brings some vigor into the series. 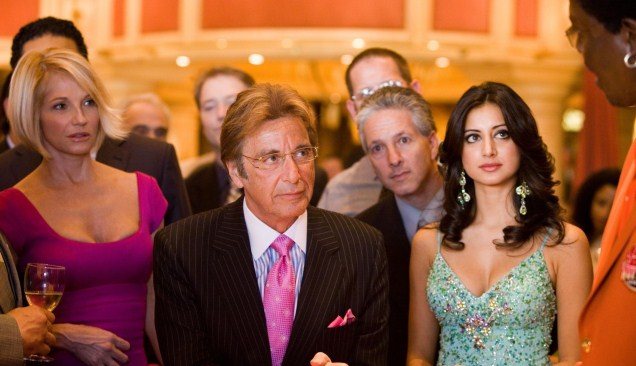 A forensic psychologist receives a call claiming he has 88 minutes to live after he aids the arrest of a serial killer.Co-stars: Ben McKenzie & William Forsythe
Reception: Box office flop, universally slated by EVERYONE (apart from @screenslags)
Al’s Mood: Concerned (That his career may have gone DTV)
Verdict: 88 Minutes is really for Pacino fans only, it is cheap, cliched and poorly executed but Pacino remains a consistent force throughout and his appearance alone justifies a watch. He’s one of these actors that can continue to be captivating regardless of how bad the film is. Hows this for trash value – do you know any other film that opens with Asian sisters kissing, photos of Princess Diana, Backstreet Boys playing, a cat called Mr Kittles, a serial killer and Al Pacino listening to rap music whilst his lesbian roommate does naked yoga as she uses an electric toothbrush? Get back to me. 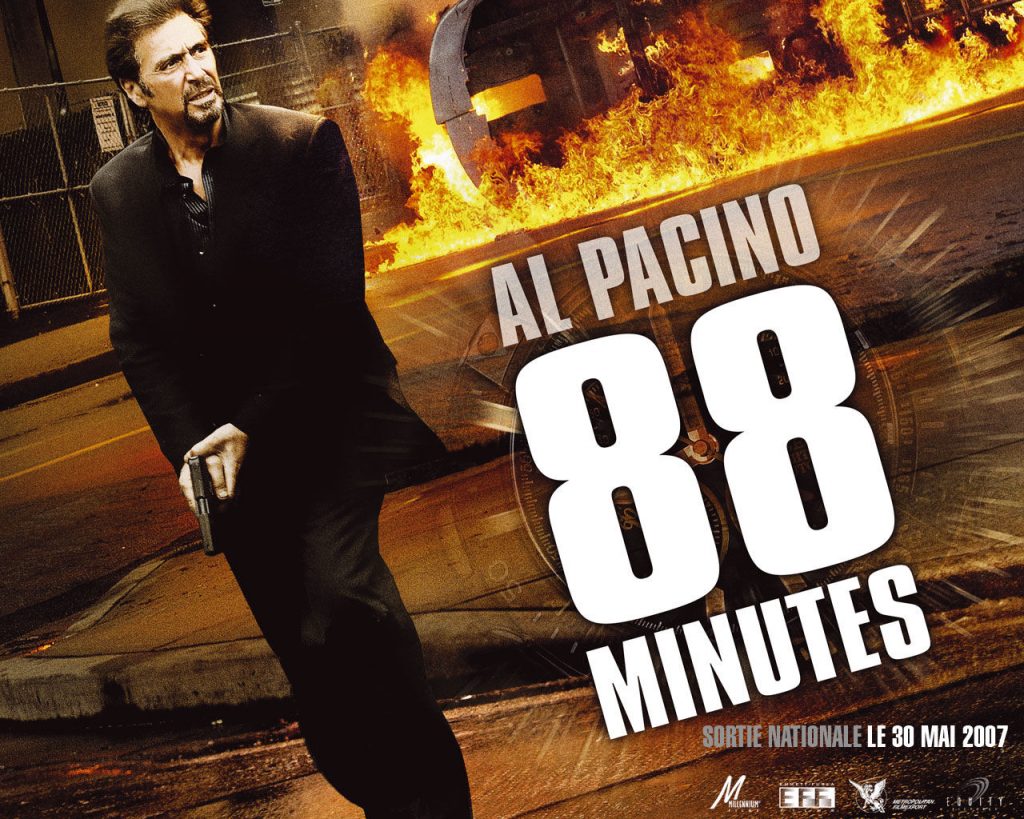 Two New York cops, Turk (RDN) and Rooser (AP), work on a case of executions of the cities criminals, all whom have a suspicious connections to Turk.
Co-stars: Robert De Niro, 50 Cent, Carla Gugino, Donnie Wahlberg, John Leguizamo & Brian Dennehy
Reception: General consensus of wasted star power, although moderate box office success.
Al’s Mood: Subdued (Possibly scarred by De Niro-Gugino sex scenes?)
Verdict: This is an entertaining, albeit heavy-handed crime-thriller that wastes all the dramatic potential of casting Pacino & De Niro alongside each other again. Despite not reaching the heights it should have, the casting of these two icons does have its moments and Righteous Kill is fairly good albeit forgettable watch. We’re Team Pacino all the way. 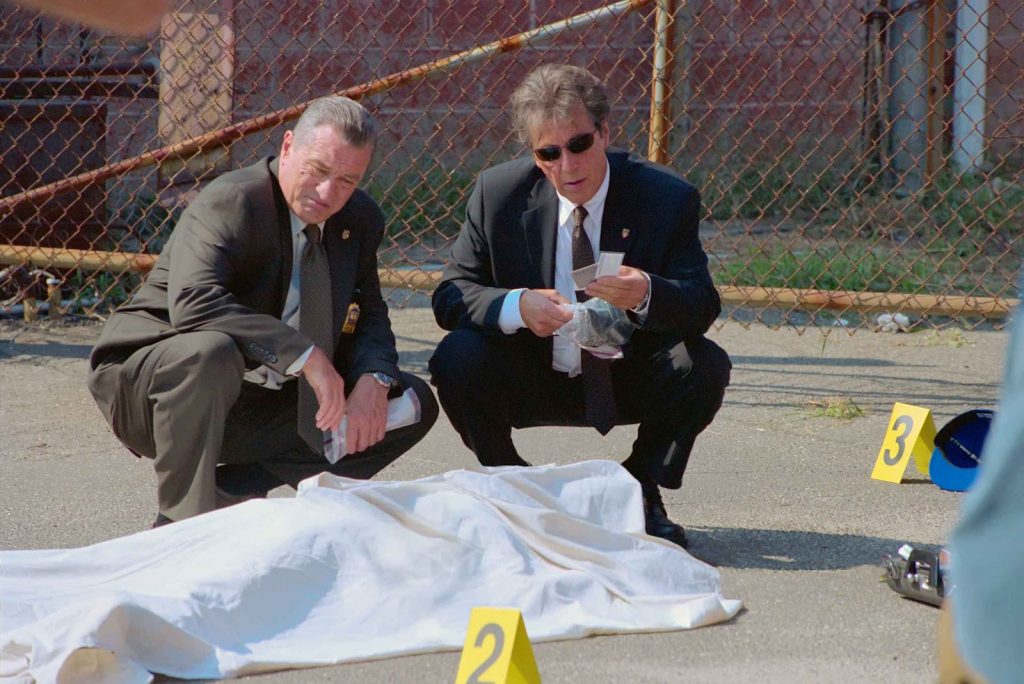 *I have not included Scarface, Heat, Donnie Brasco or The Godfather Trilogy – although among his best, there has been countless written about these films and Pacino’s performances in them elsewhere (so much so that I’m a bit sick of reading them – let alone bloody writing them).