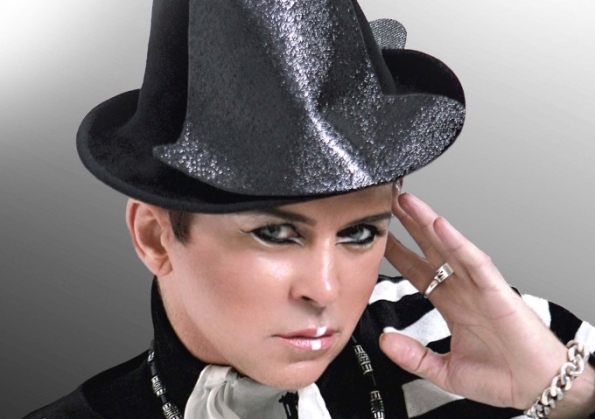 We don’t often focus on music too much here, so I’d like to think when we do it’s worth hearing. This is certainly the case for Detroit Starrzz, a collective of artists and producers, lead by iconic vocalist Steve Strange – who has had a string of hits with new-wave/synthpop group, Visage (everyone knows and loves the 1980 dance floor hit, Fade To Grey amongst others). Strange is joined by a host of superbly talented musicians from The Nightstyler’s Patrick Ruane and up-and-coming vocalist Lauren Du Valle, as well as Rachel Ellektra and Andy Adamson.

I was fortunate enough to have the privilege of hearing Strange and Du Valle sing three of the new tracks at a small gig in Edinburgh several days ago – I must say the tracks are sounding like magnificent dance floor hits harking back to earlier synthpop years whilst also maintaining a powerful modern edge. Strange’s vocals are as almighty as ever and this is clearly a performer at the top of his game.

The Detroit Starrzz have almost completed their debut alum which is set for release in the near future. Meanwhile, here are three of the tracks available for your pleasure.

AIMING FOR GOLD
This alternative anthem for the 2012 London Olympics is vastly superior to the proposed Dionne Bromfield & Tinchy Stryder track. Aiming For Gold is an inspirational dance track that captures the athletic spirit for the games, whilst also motivational for anyone going through a hard time, on the verge of giving up.This is set to be released as the groups’ first single in several weeks.

PHONE $EX
Phone $ex is a fun track, with a dark edge. Once again, it’s an original dance floor hit with some wonderful guitar solos, striking beats and sublime vocals.

HALO
Halo has been adopted by Microsoft to be showcased at their games conventions in connection to the X-Box title of the same name. Here the vocal talent of Lauren Du Valle is on full display, her voice gels with Strange’s powerful vocals for this high octane dance track. .


Strange is also working on Visage’s fourth studio album for a 2012 release, and if the tracks are anything as marvelous as the Detroit Starrzz, then we have a lot to look forward to. In the meantime you can keep updated by liking Detroit Starrzz on Facebook & by following Steve Strange on Twitter.