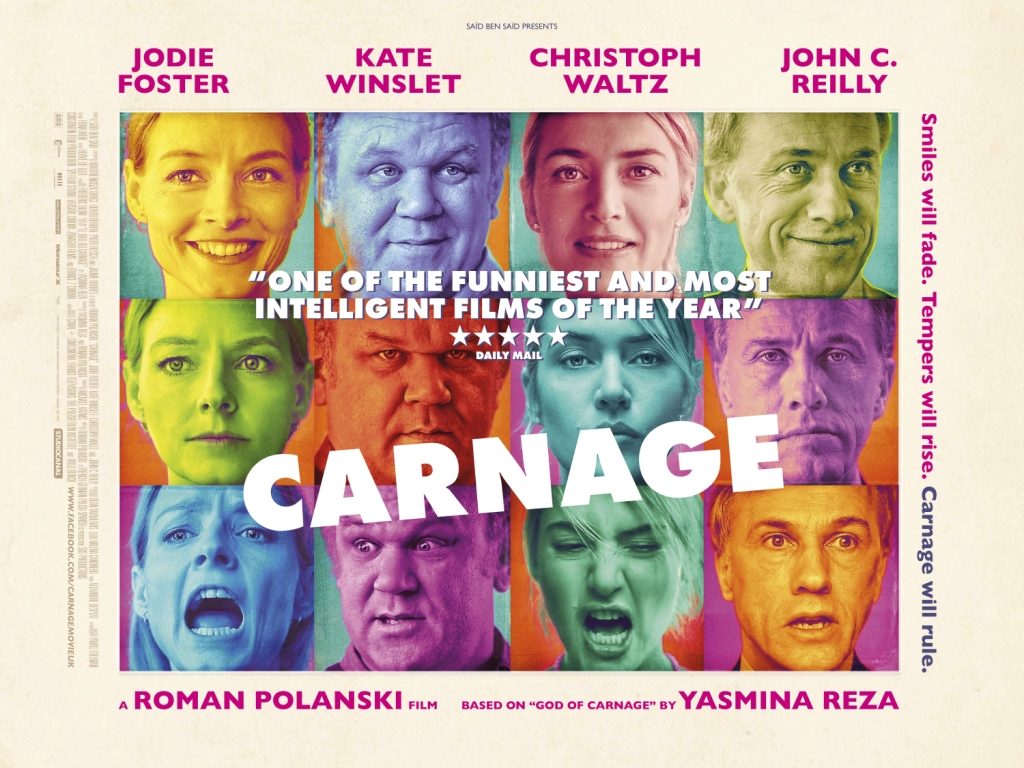 It’s difficult to find a director with such a flawless back catalogue as Roman Polanski (Yes, even Pirates has a certain charm) and this continues with his latest offering, Carnage. Based on Yasmina Reza’s play God of Carnage, the film follows two couples who hold a meeting after their sons are involved in a fight. However, it soon emerges that the parents’ issues are more prevalent than those of their children.

Carnage is a short, punchy eighty minutes long, which truly works in its favor – never overstaying its welcome. It’s Polanski’s most fast paced and sharp film with thanks to Reza’s incredibly witty source material. However, it is not just the source material deserving of praise, Polanski orchestrates the film with complete and utter precision keeping the proceedings small, allowing the four lead performances to shine. The director’s uses the claustrophobic setting to full effect, making the viewer feel like a fly on the wall – watching as the parents slowly succumb to the mounting tension, and ultimate chaos.

The four central characters include the professional parents of the boy that strikes, Alan (Christoph Waltz) and Nancy Cowan (Kate Winslet) and the ‘liberal’ parents of the alleged victim, Michael (John C. Reilly) and Penelope Longstreet (Jodie Foster). The verbal warfare between the couples is truly a joy to watch, delivered by these four phenomenal actors, each who delivers a faultless performance. The strongest element of the narrative is the pressure cooker effect that these characters are subject too – each slowly snapping throwing away their superficial beliefs. Their middle class values are broken down to their primal feelings and almost animal instincts, this is spurred on when Michael brings out his 18 year old bottle of Scottish whiskey.

It’s refreshing to see a comedy focused on strong characters and clever dialogue, Carnage never relies on crude humour – well maybe the scene where Kate Winslet’s Nancy vomits on a selection of Penelope’s prized coffee table books. However, each skilled actor gets a chance to shine and seeing their respective characters each broken down makes for fascinating and highly entertaining viewing.

Carnage is by the far the most clever and witty pictures of the last few years. Polanski’s direction is flawless as he captures the mounting tension and claustrophobia of the setting – allowing the four performers:Waltz, Winslet, Reilly and Foster to shine.