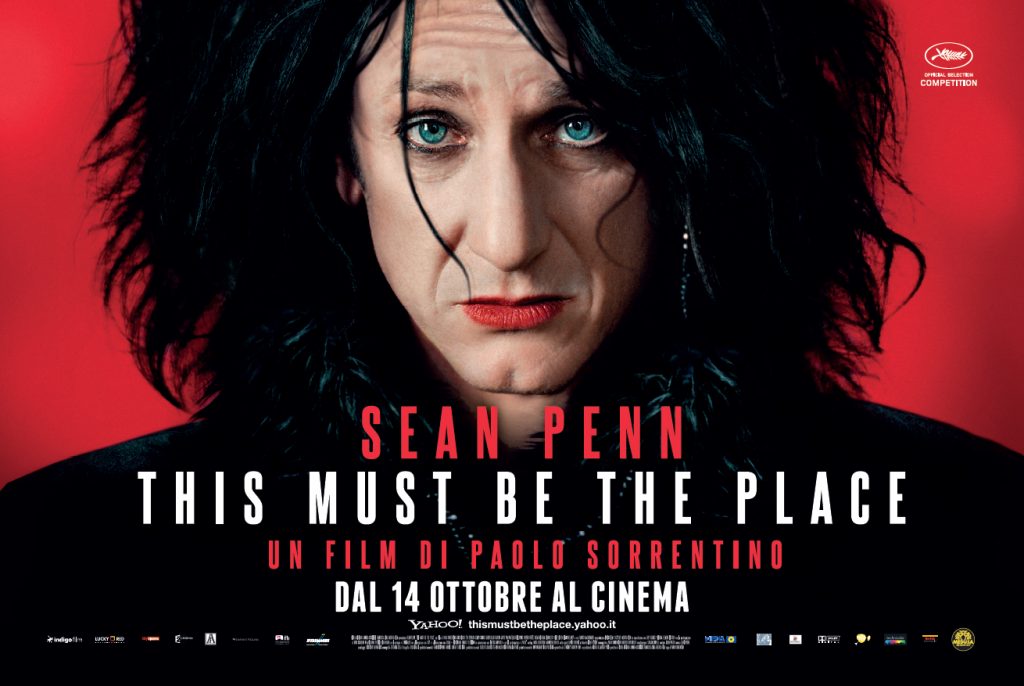 This Must Be The Place is the latest project from Italian director, Paolo Sorrentino, it follows ageing former-rock star, Cheyenne (Sean Penn) as he travels from Dublin to the USA after the death of his estranged father. It is soon revealed that his father’s last aim was to catch the Nazi war criminal who tormented him during the Holocaust. Cheyenne embarks on a journey through the centre of America, meeting a wide variety of people, as he tries to carry out his father’s wishes of redemption. Frances McDormand, Judd Hirsch, David Byrne and Harry Dean Stanton also star.

Ironically, it is particularly difficult to find the place in This Must Be The Place which can only be described as truly mystifying at points. I found the best tactic was to simply, sit back and go with the film, even when it reached its quirkiest points. Sorrentino is a particularly visual director, who structures this film beautifully albeit erratically at points. One creative sequence sees Cheyenne go to a David Byrne gig in the US, which is breathtakingly constructed – backing scenery begins to levitate and ends up upside down on the ceiling as Byrne is singing This Must Be The Place – it looks better than the way I’ve just described it, trust me. It is likely to send a shiver of delight down the spines of Talking Heads fans. Byrne also writes all of the original music for the film, which does not disappoint.

This Must Be The Place is challenging yet charming and quirky, acting as a road-movie/coming of age tale. It’s also particularly funny with wonderfully written dialogue, including one sequence where the soft-spoken, Cheyenne contemplates “Why is Lady Gaga?” These small quirky moments are great fun and you just need to simply let go and be taken on this journey with Cheyenne. Elements of sheer obscure brilliance come and go, including Cheyenne hiding in a Nazi’s widows house with a swan called Emily – no one can say this is not original.

Cheyenne’s journey raises countless questions, some of which are answered, some of which are ignored. The thematic message feels like it has lost impact due to the quirkiness and obscurity of the narrative – but it appeared Sorrentino was making a statement about America and the idea of freedom – this is a land where a Nazi war criminal and Holocaust deniers live, but also the home of those fighting for freedom. This political imbalance is also reflected through clips of Obama contrasted with those of Sarah Palin on the motel television, showing this concept of freedom is still at risk in today’s society.

One of the main triumphs of This Must Be The Place, is Sean Penn’s fascinating performance. This feels unlike anything Penn has ever done before and it is particularly entertaining to see him in a more fun role. Everything about Cheyenne is loveable from his soft-voice to his little giggle. However, Cheyenne does not simply provide comic material – it is also gripping to watch the character go on his personal journey from a bored, glammed up rock star to someone with a genuine purpose and focus in their life. Cheyenne is a man that has refused to grow up and This Must Be The Place looks at his acceptance of adulthood. This is by far Sean Penn’s most interesting performance in a very long time.

The supporting performances are also of an equally high calibre from the role of Cheyenne’s wife, played by the incomparable France McDormand. The relationship created between these two strange characters is utterly convincing and the pairing of Penn and McDormand is flawless. Judd Hirsch also appears in a supporting role as a larger than life Nazi hunter who aids Cheyenne’s quest for revenge. Just to completely add to the bizarre nature of This Must Be The Place there us a bewildering yet entertaining appearance from Harry Dean Stanton as the creator of the wheeled suitcase – just go with it.
This Must Be The Place is a difficult to comprehend at points but if you just simply allow yourself to be taken on the journey – it is a thing of brilliance. Sorrentino’s direction is fresh and exciting, in this charming and eccentric road movie. Penn’s is at his most dynamic and gives his most interesting performance in recent years. The supporting turns , including a perfect appearance from David Byrne, also help to make this a one of a kind cinematic experience.