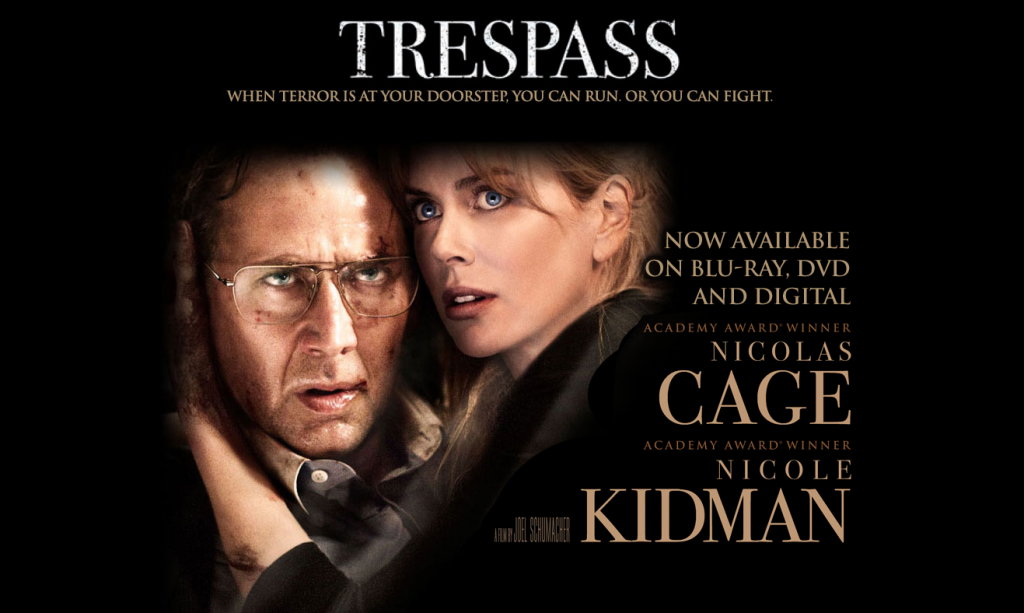 Here at Silver Screen Slags we pride ourselves in taking care of some terrible films – many of these misunderstood classics have a certain charm that critically acclaimed films just cannot replicate. Essentially, we love a flop. So when news struck of Joel Schumacher’s latest directorial venture/box office disaster, Trespass, we were delighted. As well as having this masterful director on board, Trespass also boasts a cast including: Captain Crazy himself, Nicolas Cage, one of our favourite botoxed beauties, Nicole Kidman and screen hunks, Cam Gigandet and Nico Tortorella. Our interest was further peeked after seeing the box office figures: this modern classic made only $7m of its $35m budget back, as well as holding the honorary record of the fastest film to be released on home video after its initial theatrical release (at a snappy 18 days). Trespass received it’s British DVD release this month and we were quick to snatch a copy up. Were our hopes of finding a future trash classic met or is this just a piece of cinematic spew?

Trespass is a mixed bag – at times it simply feels so generic that it is difficult to find much to like about it. We have a wealthy businessman (Cage), his perfect wife (Kidman) and there roguish teenage daughter – three characters which are traditional in the American home-invasion thriller. Then there is the rather unoriginal aspect of the masked burglars breaking into their (incredibly modern) home and trying to break into the family safe. Sticking to these genre parameters, Trespass is not original, but it is fine and somewhat passable. It’s the rare occasions when Trespass tries to break out of these genre boundaries that things go a little crazy. 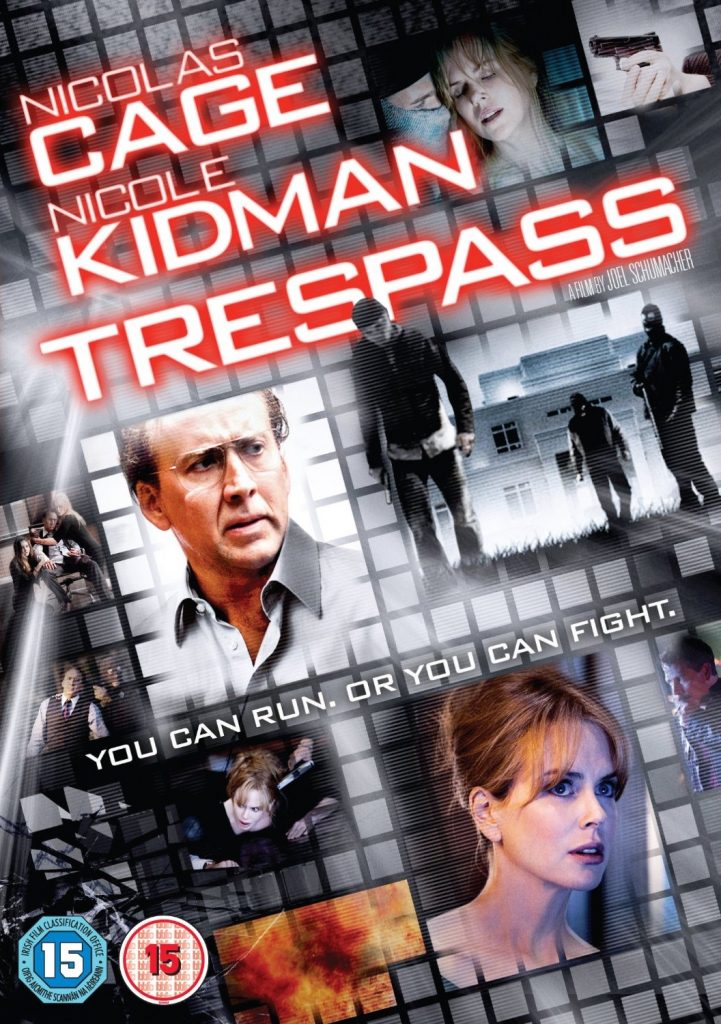 One of these rare obscurities comes during Nicolas Cage’s character’s gradual breakdown and offers up his kidney to the burglars. Cage overacts so much, that every line he speaks with this bizarre nasal accent, feels like a gag. There is a certain ‘so bad it’s good’ pleasure in Cage’s performance, but it never reaches the peak Cage-madness a la Wicker Man style. Nicole Kidman, an actress who normally dominates the screen, simply fades into the background here – the character has no depth and wastes the skill of Kidman.

Perhaps more painful than the waste of these two good stars is seeing Schumacher’s name on the credits. This is a man who has created some modern classics and I’ll happily admit to liking most of his later work, mainly Blood Creek and Twelve. But this is a generic, DTV thriller, lacking any real stylistic touches from the great director.

On the positive side, there is something quite magnetic about the production design. The setting of this modern home is so garish with its copious amounts of technology and bright neon colours – that its rather hard to look away. It even gives the film a rather unbalanced atmosphere, especially when combined with a chaotic narrative that involves drug addicts, diamonds, chairs being thrown through glass walls and equally  mental burglars/home-owners.

Trespass is a bizarre mess of a film. It leans more towards cinematic spew but it does have occasional moments of trash gold, mainly through its cheap and shiny design and a deranged lead performance from Nicolas Cage. This is one to rent, chances are you’re not going to want to see it again (unless making a twisted Nicolas Cage montage for Youtube).