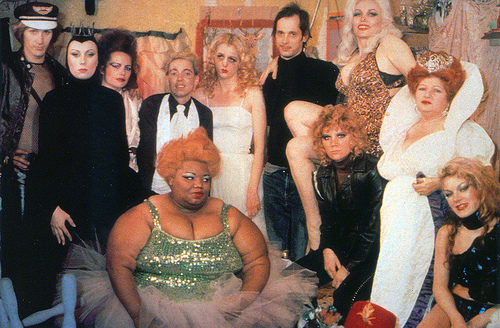 Desperate Living is a difficult film – it is such a rapid departure from the John Waters’ that we have seen before (in the undeniably brilliant Pink Flamingos and Female Trouble) that it may be difficult to take. Before watching, I simply knew this as the Waters’ film that never featured Divine, I cannot deny that this dented my interest slightly and put me off watching it until several weeks ago. It is immediately noticeable that there has been a significant budget increase since Female Trouble, Desperate Living was made on $65,000, three times that of its predecessor.  Only a few of Waters’ key Dreamlanders feature – Mink Stole, Edith Massey and Mary Vivian Pearce. Sadly David Lochary died before shooting and Divine was committed to a stage show. This lead to a wide variety of new faces appearing, each with varying degrees of success.

Desperate Living follows a mentally disturbed housewife, Peggy (Mink Stole) and her three-hundred pound maid, Grielzda (Jean Hill), both on the run after they murder Peggy’s husband. They encounter a cross-dressing police officer who demands they either go to jail or extradite themselves to Mortville – a sleazy shanty town, ruled by the evil Queen Carlotta (Edith Massey). The pair choose Mortville and stay with a self-hating lesbian wrestler and her trashy lover, Muffy St. Jacques (Liz Renay). 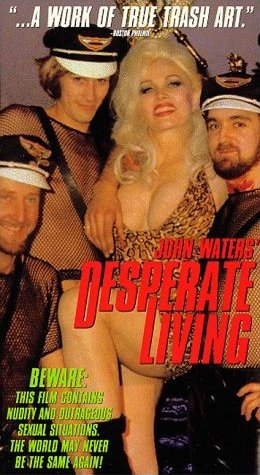 Desperate Living is certainly great fun for the most part and could perhaps benefit from several watches. However the first fifteen minutes are definitely its’ strongest – these scenes take place in suburban Baltimore, where Waters’ is completely at home, critiquing the normal domestic world. Watching Mink Stole’s larger than life performance, as we see the full extent of Peggy’s neurotic behavior is truly wonderful. Particularly one scene where her window is accidentally smashed by her son’s friend – leading to this outbursts “Don’t tell me I don’t know what Vietnam is like!” and “Go home to your mother! Doesn’t she ever watch you? Tell her this isn’t some communist daycare center! Tell your mother I hate her! Tell your mother I hate you!” The opening is chock full of hilarious outbursts from Peggy and at this point the film looks incredibly promising.

We are also introduced to Grizelda, who is one of Waters’ finest characters. She’s sassy and Jean Hill has a wonderful sense of comic timing, uttering lines like “I ain’t your maid anymore bitch. I’m your sister in crime.” The developing relationship between Peggy and Grizelda is fun to watch; seeing the stuck-up housewife bond with the feisty maid creates a few laughs. The pair even have lesbian prison sex upon arriving in Mortville, which is disturbing and magnificently trashy. The same can be said for their encounter with a sleazy transvestite cop, which is by far one of the films’ best moments, simply because of its sheer outrageous weirdness. Seeing a cop writhing around the floor in red lingerie shouting “I’d like to stick my whole head in your mouth and let you suck out my eyeballs!” must be seen to be believed.

Unfortunately, it is when Waters’ steps out of the confines of the domestic realm of Baltimore, things go downhill. One of the main issues is the lack of authenticity that fill Mortville. Desperate Living is essentially an anti-fairy tale – the larger production budget has gone into crafting some garishly coloured, trashy sets, which make the tagline, It isn’t very pretty….. seem wholly appropriate. The town is filled with leather-daddies and aggressive lesbians, which is quite quirky and fun but it seems to confuse the message Waters’s is trying to get across.

What Desperate Living is trying to do is critique fascism and political corruption, but it never quite works. Everything feels far too chaotic, especially when combined with Waters’ trashy style. The main symbol for this corruption is Edith Massey’s Queen – Massey has been given a larger role in this production and is incredibly amusing to watch. However, this part has been far more sexed up than her usual roles and one cannot help but feel she is slightly uncomfortable in these scenes. There is something of twisted genius about Massey in this role, especially when uttering bizarre lines like: “Seize her and fuck her.” Newcomer, Liz Renay is also a wonderful addition to Waters’ cast. This over-the-top, buxom beauty literally chews scenery and provides a deliciously trashy performance – especially in the scene where her lover showers her with gifts.

Waters’ is a master at critiquing everyday suburban life and various other issues, but here when he ventures into larger topics like fascism and corruption – things get a little hazy and less powerful. For a fun, trashy ride, Desperate Living is excellent but one cannot help feel that it is missing the spark of the unforgettable, Divine.