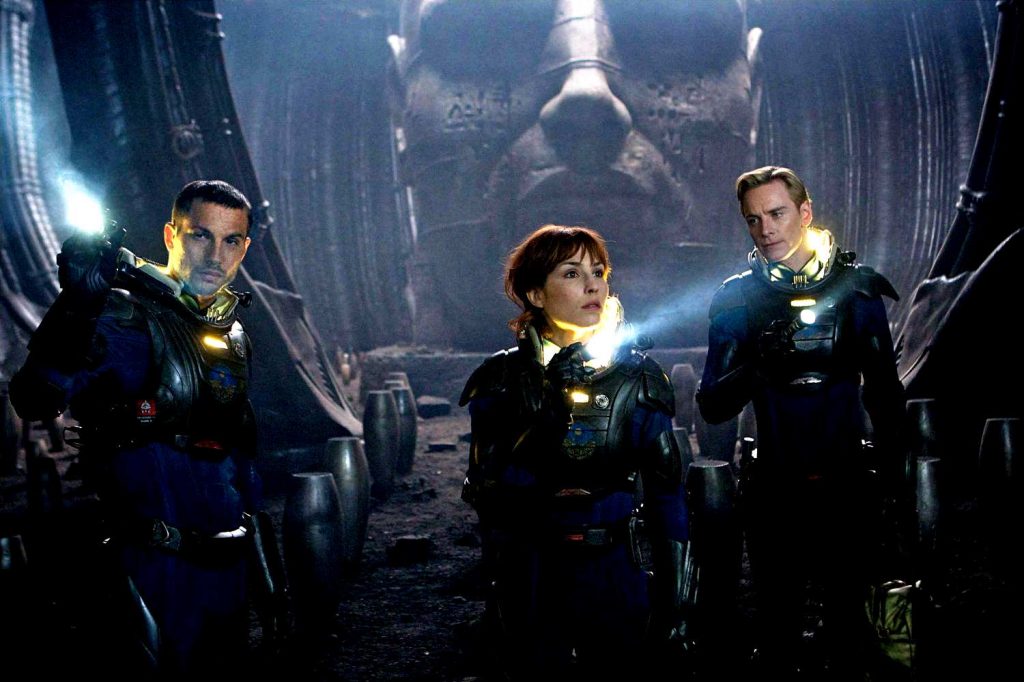 Sir Ridley Scott makes a welcome return to the world of science-fiction, for the first time since directing the 1982 classic, Blade Runner. Much of the hype surrounding Prometheus is linked to its’ connection with the Alien franchise, it should be noted that this is a loose-prequel.

Prometheus follows a group of explorers, funded by the Weyland Corporation, who set out into space to discover the origins of mankind. However, after arriving on a planet that can sustain life, they learn that their presence is certainly not welcome, and may even lead to the destruction of the human race.

It is clear that Prometheus is a truly breathtaking film from the first few opening shots, showcasing Dariusz Wolski’s remarkable cinematography and setting the tone for the sheer visual spectacle that the film offers. We see moments of beauty from sweeping shots over mountain-ranges to epic artifacts on alien planets – all stunningly crafted. Scott’s direction maintains the spectacle whilst capturing the looming, foreboding atmosphere of these alien worlds. Throughout Prometheus, Scott amps up the tense atmosphere, slowly turning the crew’s exploration mission into a disturbing fight for survival.

However, Prometheus does not simply launch into the action heavy sequences, Jon Spaihts and Damon Lindelof’s script ensures strong character development. Given this long build-up, Prometheus touches upon many theological ideas and themes, which results in a slight loss of narrative focus. One of Alien’s key strengths was that it was a simple narrative – humans fighting for survival against a vicious xenomorph, underneath Prometheus’ theological ambitions, lies the similar concept of humans fighting for survival against the unknown. Not to say these philosophical concepts are not interesting, there are simply too many to make a clear statement.

Prometheus presents us with a well crafted selection of characters, most notably Michael Fassbender’s Lawrence of Arabia fixated android, David. Fassbender is outstanding in the role, allowing touches of jealousy and anger to shine through his restrained performance, after all he is continually reminded that he is not and never will be human, craving respect and equal standing. Fassbender’s co-star, Noomi Rapace shows complete devotion to the role of Elizabeth Shaw, the Ellen Ripley of Prometheus. The actress is utterly convincing, bringing a sense of physical and mental determination to the part of strong-willed, Elizabeth. Whether the constant flashbacks to the character’s youth, were required, I’m not sure.

For the second time this week, Charlize Theron has proved that she is at the top of her game, shining in both Snow White & The Huntsman and Prometheus. The actress stars as Meredith Vickers, a Weyland Corporation executive, grasping at control of the ships’ mission. Theron brings a steely determination to this slightly untrustworthy character. Logan Marshall Green & Idris Elba complete the cast with their enjoyable supporting turns.

Prometheus proved completely gripping from start to finish, as well as boasting stunning visuals, it also presented us some particularly disturbing elements of body-horror. Sticking true to the horror of Alien, the creatures of Prometheus, prove equally terrifying as their predecessors with new designs from Neal Scanlan and Conor O’Sullivan paying homage to those of H.R. Giger. This is just one of the many references to the original Alien (the most notable being in the film’s conclusion), that is likely to delight fans.

Ridley Scott has presented us with a breathtaking piece of science fiction cinema. The sheer scale of the project alone is awe-inspiring and Scott handles the film with his usual skill and professionalism. From the onset the Prometheus is dark and foreboding, retaining a sense of tension and horror throughout – just as good sci-fi/horror should. Despite attempting to cover too much philosophical ground, Prometheus, has enough positives to be regarded as the best Alien film since Scott’s original.