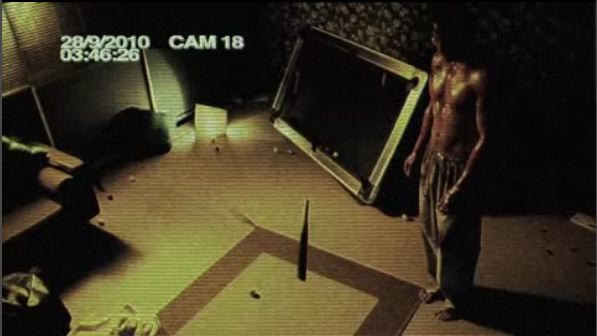 Eight volunteers are sent to a remote medical facility to begin clinical trials on a new drug, tentatively titled Pro-9. It soon becomes apparent that this is no ordinary drug as extreme side affects begin to appear – you know, like turning into a raging psychopath.

Although the subject of clinical trials has been tackled in the horror genre before, it still remains a chilling concept. Ian Clark furthers these chills by instilling a strong sense of realism throughout Guinea Pigs, most notably through his almost documentary style direction. From the onset, descriptions appear on screen, mixed with unfocussed close ups and establishing shots of the eerie clinical settings which gives Clark’s film an unsettling familiarity.

After a rather long but well crafted build up, we get a strong sense of the foreboding horror that is expected to ensue. This is followed by several well executed moments of tension, which fortunately never unveil too much, normally a good tactic in the genre, leaving the viewers’ imagination to the work. Unfortunately these tense build up gets wasted with Guinea Pigs lacking in a real scares, jumps or chilling imagery.

Most of the characters are interesting and reasonably well developed, despite all fitting into traditional archetypal genre roles. Leading character, Adam (Aneurin Barnard) although well acted, proves too nice for his own good by making some dodgy decisions – like not leaving the compound when he has the chance. A scene stealing turn from Looking For Eric’s Steve Evets, as a clinical test “veteran” adds some wry humour to the proceedings. Other small joys include Chris Larkin’s appearance as a wise-cracking Doctor in charge of the proceedings.

Guinea Pigs is a reasonably entertaining watch, with director Ian Clark creating a solid, realistic atmosphere and strong sense of tension, as well as some welcome moments of humour. Unfortunately, Guinea Pigs is lacking in any genuine scares and ultimately proves a bit unmemorable.

Originally written by Me, for The People’s Movies