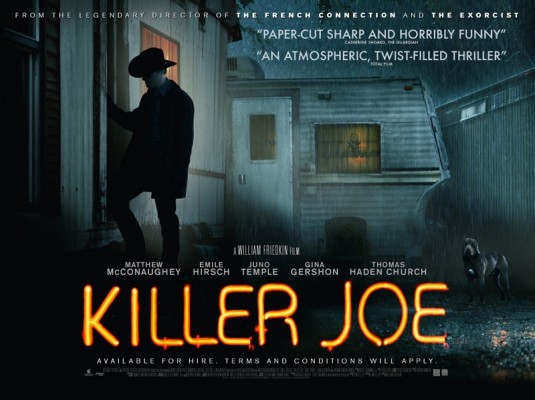 What better way to open the 65th Edinburgh International Film Festival than with iconic director William Friedkin’s lastest feature, Killer Joe? Friedkin has arguably never made a bad film (let’s just pretend Cruising never happened) and the seventy-six year old proves that he is still at the top of his game with his latest opus.

This pulpy Texan-noir follows the financially struggle, Chris Smith (Emile Hirsch) who plots to have his mother murdered, in a harebrained scheme to collect $50,000 insurance money. After confessing the plan to his father (Thomas Haden Church), sister (Juno Temple) and step-mother (Gina Gershon), the family seek out the services of lawman-meets-hired killer, Joe Cooper (Matthew McConaughey).

Friedkin manages to capture the nerve shredding intensity (similar to that of his previous film, Bug) through his bold, atmospheric direction. From the onset, Friedkin hits us with the ominous sound of Joe’s carefully timed lighter clicks, followed by shots of a rain-drenched, derelict trailer park and prescient lighting strikes. This gives us an early impression of the tense and brutal tale that is about to unfold. Friedkin does not hold back when it comes to depicting raw portrayals of violence and dark characters – possibly a device that may leave some viewers feeling somewhat alienated. 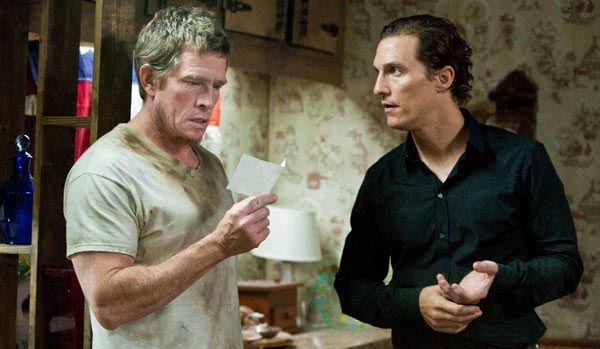 Fortunately, between these moments of intensity, Tracy Letts’ screenplay presents us with several wonderful moments of darkly comic humour. These perfectly executed moments of deadpan humour and awkward fun provides light relief from the Killer Joe’s dark subject matter, proving to be an unforgettable combination. Letts’ screenplay may begin with a simple premise, but Killer Joe soon proves to be a highly original and often unexpected and frenzied ride. This is perfectly summed up in the films’ outrageous, near-genius conclusion which proves to be both shocking and riotously humorous.

It is particularly nice to see that Matthew McConaughey has escaped from the world of romantic comedies and is once again proving what a wonderful actor he is. His underplayed portrayal of the sardonically smooth, Joe Cooper, is a career best and one of the sheer delights of Friedkin’s film. Gina Gershon proves to be on fine form as Chris’ trashy, no-nonsense step-mother bringing a convincing slice of Southern gumption to the role. Thomas Haden Church’s deadpan comic skills also prove to be a highlight with the star excelling as the bumbling, beer-guzzling patriarch. Younger actors Juno Temple and Emile Hirsch are equally well cast with the pair both able to shine alongside the likes of McConaughey and Gershon.

Killer Joe is a magnificent example of modern-noir, with Friedkin proving to still be one of the most exciting figures in modern cinema. The director’s latest feature proves to be one of the most energetic, brutal, tense and darkly comic pictures of the year, featuring an unforgettable career best performance from Matthew McConaughey.

Originally written by Me for The People’s Movies.