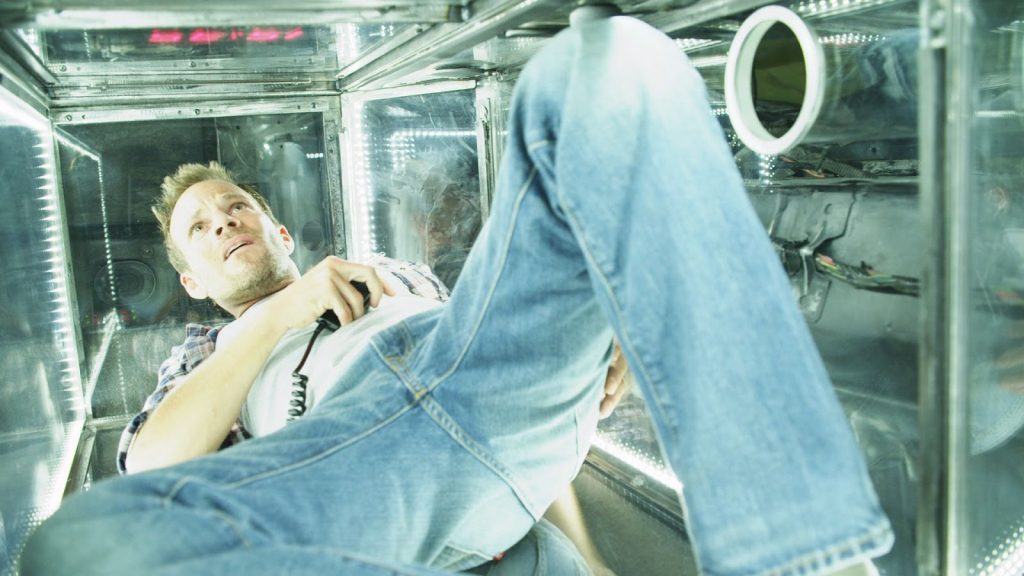 Stephen Dorff stars in Gabe Torres’ claustrophobic thriller, Brake, which proves to be far more than another Buried. Receiving its UK premiere at this years’ Edinburgh International Film Festival, Brake provides some highly entertaining B-Movie thrills alongside another stellar performance from Dorff.

Secret Service agent, Jeremy Reins (Dorff) wakes up trapped in the boot (or trunk, for the non-Brits) of a car, with no recollection as to how he got there. Reins is forced to endure a series of physical and mental tortures as terrorists attempt to extract the location of Roulette, the President’s secret bunker.

Tim Mannion’s screenplay may not be the most original piece of writing in recent years, with obvious parallels to Rodrigo Cortes’ Buried being raised. However, Mannion does attempt to deviate from his predecessor with the inclusion of some well contained action. We’re talking shootouts, flooding and bees (calm down Wicker Man ’06 fans), all just some of the high-octane antics that you can expect from Brake. These thrills combined with Torres’ tense, claustrophobic direction, make Brake, a enthralling, well contained action film. You have got to hand it to a team that can make eighty-five minutes of film set in one claustrophobic location, this engaging.

As the only actor on screen throughout the majority of Brake, Stephen Dorff truly excels in his performance, both physically and emotionally. The viewers’ gaze rests firmly on the Somewhere star, feeling totally connected to the character of Jeremy – we are with him during this whole ordeal. Even when handling some atrocious dialogue or Jack Bauer style screams, Dorff’s performance retains a sincerity and likeability whilst also managing to stay convincing as an action hero, surely no easy task when you are confined to a Perspex box.

As well as the clichés to be found in Brake’s dialogue, they can also be seen through several narrative features like Jeremy’s remorseful phone call to his distant wife or through Tom Berenger’s shady CIA big shot character. However, Brake does make up for this with some unexpected paranoia-infused twists lurking in its conclusion.

Brake is an enjoyably tense thriller, boasting a stellar performance from the inimitable Stephen Dorff. Several high-octane thrills and an unexpected conclusion ensures that Torres’ claustrophobic film is a completely worthwhile watch.
RATING: 3.5/5