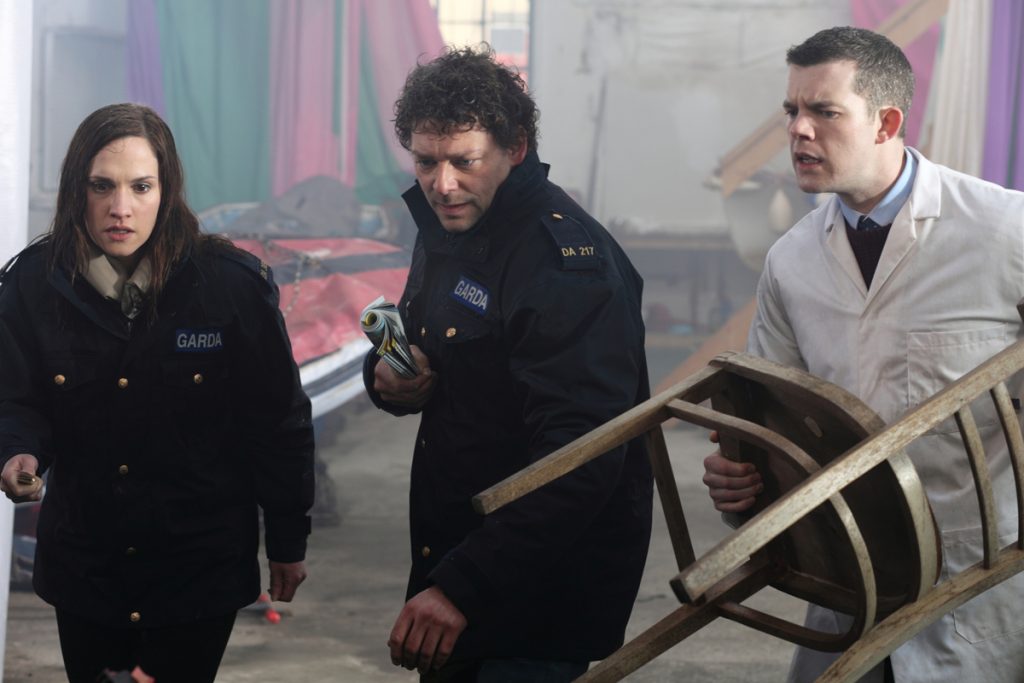 Jon Wright’s Irish set horror, Grabbers, feels like a welcome return to the days of the 1980s creature features laced with comedy. So far, it is also the most entertaining horror film of this years’ Edinburgh International Film Festival.

After several dead whales wash up on the shores of Erin Island, Garda Officers Ciarán O’Shea (Richard Coyle) and Lisa Nolan (Ruth Bradley) are set on the case. They soon discover the presence of blood-sucking, tentacled aliens on the island, promptly named “grabbers”. However, it soon becomes clear that these creatures have an aversion to alcohol – so let the drinking ensue!

Part of the joy of Grabbers, is that it never takes itself too seriously, balancing both comedic and horror elements singlehandedly. It replicates the effortless whimsical charm of timeless monster features like Gremlins, Tremors and Critters – ensuring this is a fun watch from start to finish. Even the basic premise of Grabbers gives you an insight into the cheeky nature of the film – who doesn’t want to see a town of drunks battle against aliens?

Grabbers may be fun, but it does not skimp on the darker horror elements. There are plenty of unexpected jumps and scares spread throughout – something that many other of Festival’s horror films have been lacking. Wright’s uses the eerily isolated Irish coastline for numerous creepy set pieces, from an attack on the beach to a country house invasion. There are also a variety of sweeping aerial shots capturing the picturesque qualities of the Irish setting.

Many a horror film has been let down by the eventual unveiling of its antagonist. Sometimes not seeing the source of the terror is far scarier than what is actually presented. However, the creature effects team behind the monsters in Grabbers, ensure that this is not the case. These are convincing, nasty looking monsters that are just as sinister on screen as they are when out of shot.

Grabbers also boasts a strong cast of excellent British character actors in well-written and engaging roles. Richard Coyle, who excelled in this year’s Pusher remake, brings a truly endearing performance to Grabbers, whilst also proving to be equally talented whilst handling more comedic elements. The relationship between his slack, heavy drinking Garda officer and Ruth Bradley’s straight-laced, young recruit, provides some welcome laughs. Bradley shows a wonderful sense of comic talent in Lisa Nolan’s transformation from loveable prude to an even more loveable drunk – she is completely terrific throughout. Russell Tovey pops up for a smaller supporting role which provides a few laughs, but as good an actor as he is, the role is more annoying than entertaining.

A hilarious supporting cast continue Grabbers’ charm offensive from Pascal Scott’s turn as the town’s cheeky GP to David Pearse and the excellent Bronagh Gallagher as the quaint local pub landlords. Grabbers is a thoroughly enjoyable return to classic creature feature horror/comedy. Atmospheric direction, a perfectly comic screenplay and charming performances help Grabbers stand out from the rest of the festival’s horror pictures. It is great fun.