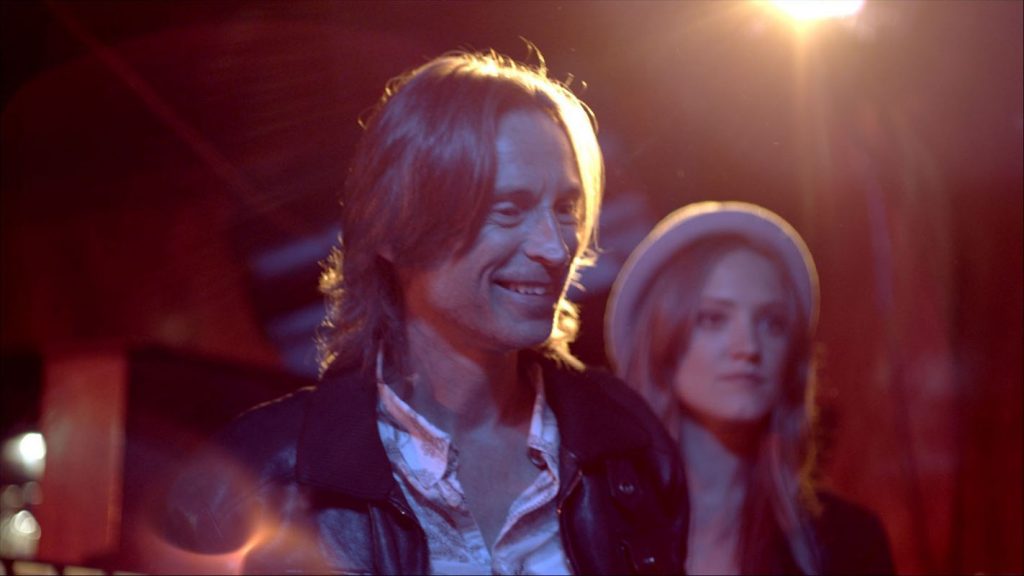 After a successful brief stint in the world of television, Robert Carlyle makes his return to feature films with California Solo. Marshall Lewy’s film excels as an engaging character study with the help of an exceptional performance from its’ lead star, but brings nothing particularly new to the genre.

California Solo follows expat Lachlan MacAldonich, a former Britpop rocker who now works on a Los Angeles farm. After a DIU and the discovery of a former drug charge, Lachlan is threatened by deportation charges. The faded-star must fight to remain in the country, but after several old demons reawaken, this does not look likely.

Whilst Lewy’s screenplay may not make any bold statements or deviate from traditional melodramatic formula, it proves to be engaging enough by simply telling one man’s story. This tendency to simply observe does make California Solo feel very much like a safe “afternoon TV movie”, which is not to say that it is not enjoyable.

The character of Lachlan truly carries the film. This is a particularly well written role and equally well performed by Carlyle. Seeing the transformation from a relatively upbeat farm worker fall back to the self destructive ways from his rock star past, makes for fascinating viewing. California Solo looks at how poor life choices and past memories can lead to a path of self destruction, but also ensures there is always a new beginning in sight. This self destructive character may feel slightly like it has been done before, but Carlyle injects so much life and soul into the role that it ultimately feels fresh.

The Scottish star essentially carries the film from the onset, showcasing one of the strongest performances of his career. This utterly convincing, raw and natural turn makes for a thoroughly engaging watch. Even clichéd narrative elements – like Lachlan reconnecting with his daughter, Arianwen, after ten years, are brought to life by these stirring performances. Praise must also go to Savannah Lathem for a wonderfully delicate performance as the said estranged daughter.

To fans of the Britpop scene, it is interesting to see the epitome of the British music scene in the early 1990s, transformed to the setting of present day USA. The American character’s reaction to Lachlan’s music history is particularly intriguing – some completely unaware of his band The Cranks, whilst others view him as an almost legendary cult figure.

Other moments, including Lachlan’s visit to his ruthless old manager, capture the unsympathetic nature of the music business and provide an interesting deviation from traditional melodramatic narrative elements. However, these are promptly reaffirmed by the construction of a faux romantic subplot with a young woman, Beau, from Lachlan’s farmers market.

California Solo excels as an engaging character study, laced with traces of the Britpop music scene. Carlyle’s performance as Lachlan is sensational, so much so that you would be willing to forgive the narrative’s occasional lack of originality.