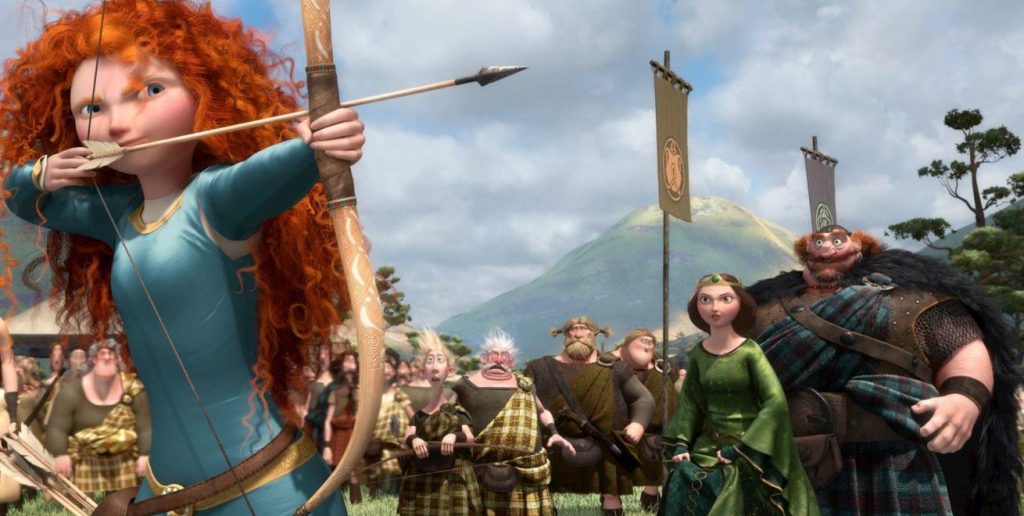 Pixar’s Brave has now grossed an impressive $131 million in North America and has still yet to be released throughout most of the world. Whilst Mark Andrews’ Brave may be doing well financially, I’m in some doubt as to whether it artistically lives up to the studio’s glowing reputation.

Independently minded Princess Merida (voiced by Kelly MacDonald) is determined to choose her own destiny, so when her mother arranges for her to be married to the son of another clan leader, the flame-haired young girl rebels. After wishing her mother would change, Merida gets more than she bargained for as her mother transforms into a bear, leaving the Princess to change her back before the spell becomes permanent.

Pixar’s technical brilliance is evident from the opening shots, sweeping over Scotland’s scenic glens and dense forestry which is truly awe-inspiring. These flawlessly crafted sequences blur the lines between reality and animation, with the illusion only broken by the presence of the computer-animated characters. This high standard continues throughout, with the Scottish landscape helping define the mythic character of the film.

Brave steps away from traditional Disney territory, reimagining the role of a Disney Princess. Merida is not looking for a handsome Prince, she dreads the idea of having that future. Providing a contrast is her mother, the traditional Queen Elinor (voiced by Emma Thompson) – focussed on her representation and royal duty. The contrast between the pair proves to be of some narrative interest – with Brave’s message being one of family and communication, the latter being something lacking between Merida and Elinor’s relationship.

Unfortunately, once we establish these themes, it is clear that Brave is lacking the narrative depth of some of its Pixar predecessors. This is a simple story that mainly consists of the heroine attempting to transfer her mother back to her original form – I personally found this linear structure something that limited Brave.

Whilst younger viewers will surely be delighted by the humour in Brave, adults may be left aloof, with a lack of consistent jokes for an older audience. However, the Billy Connolly voiced King Fergus, does generate a lot of laughs and the star is his charismatic self. A host of Scottish references went down a treat at the Edinburgh press screening from titbits on empire biscuits, The Wicker Man Festival to a humorous Highland games style sequence. There is also a host of entertaining vocal performances from Scottish stars including Craig Ferguson, Robbie Coltrane and Kevin McKidd (all as rival clan leaders) and others including Julie Walters.

Brave is certainly by no means a bad film, but when compared to the likes of Pixar’s Toy Story 3 and Up, it is somewhat lacking. Astonishing visuals and an exciting twist on the Disney Princess feature do help Brave to shine. Although, its linear narrative and emphasis on more childish humour does prove somewhat unappealing as a viewer.