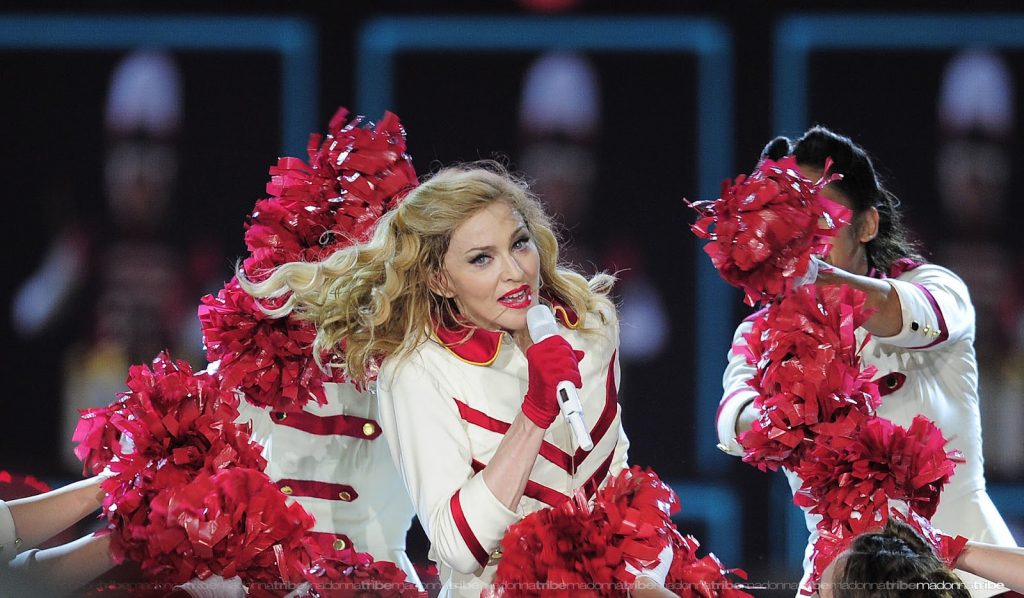 Being a huge fan of Madonna, the Queen of Pop (as readers of Silver Screen Slags will know) I jumped at the chance to see the star’s first Scottish concert (even better since it was in my hometown) – this was likely to be a once in a lifetime opportunity. Unlike many, I adored her latest album MDNA – so was excited to see this near flawless album performed live. Unfortunately technical inadequacy and the audience response left the experience which should have been a delight from start to finish, feeling slightly sour.

The MDNA tour boasted solid production values including visually entrancing backing videos ranging from Tarantino-esque, blood-splattered revenge stories (in the likes of Revolver and Gang Bang) to the kitsch, garish colours of her cheerleader based Express Yourself routine. Not mention the atmospheric Kabbalah-infused, ritualistic opening. However, the dark nature of Madge’s new material and the sometimes morbid atmosphere exuded from the backing videos, clearly left some of the audience alienated.

The first interlude presented us with striking grey shots of headstones set against a stunning soundtrack of Madonna’s Heartbeat and Best Friend, but this proved to be the final straw for many. The standing audience, a large proportion of whom were clearly expecting Madge to flail around stage belting out Holiday or Dress You Up, flocked out in droves with around 20% leaving six songs in. Most of the audience however had the sense to embrace this theatricality of this awe-inspiring assault on the senses.

Madonna’s vocals were flawless throughout, with the star’s rendition of classic hits including Like A Prayer or Express Yourself and newer material like Turn Up The Radio and I’m A Sinner sounding equally fresh. However, to no fault of the singer the venue showed a complete technical inadequacy – with the speaker system muffled and quiet, making it an impossibility to understand any of the singers repartee with the audience. 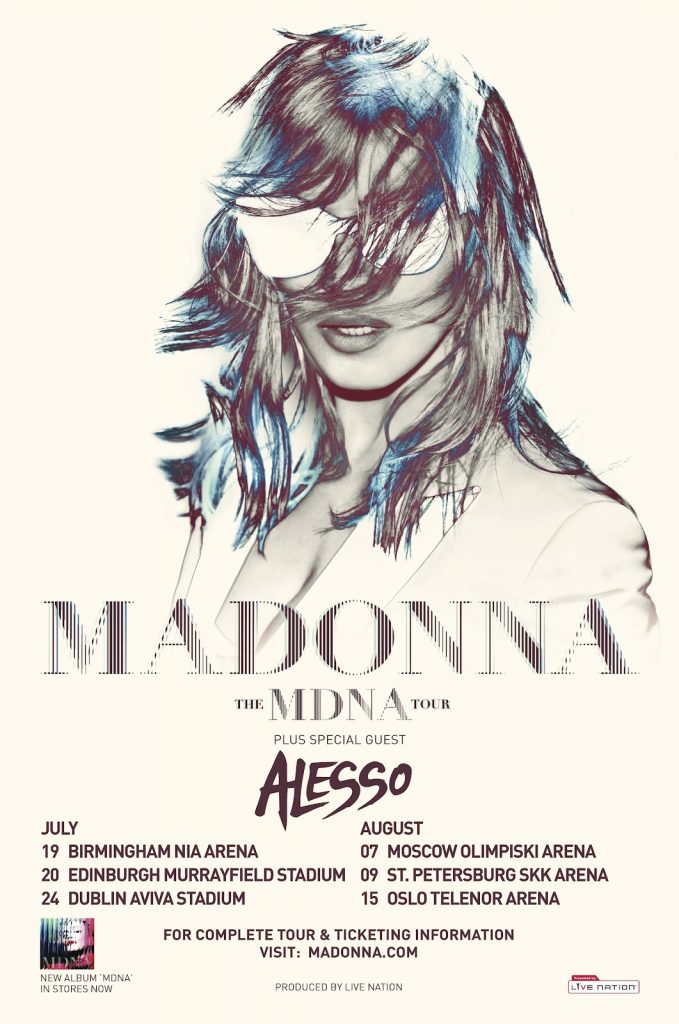 Those in the audience that left after the first interlude, soon missed out on the MDNA Tour’s spectacular upbeat transformation. Madge burst out on stage in a cheerleader outfit with a marching band to a vivacious rendition of Express Yourself laced with elements of She’s Not Me and Gaga’s Born This Way, which proved to be a clear highlight of the show. This was followed by her flawless Gimme All Your Luvin, which may not have been a commercial smash but proved to be a delight to hear live.


Unfortunately, the MDNA audience – many of whom had walked out, would have surely been more suited to a Vera Lynn concert. Many around myself refused to embrace the atmosphere or make any attempt to let go and enjoy themselves, simply sitting staring blankly at the distant stage. I was dying to hear Madge’s “Don’t ever sit down at my show” speech – most of the audience was much in need of it. It may have been due to an unfamiliarity of the material from Madge’s MDNA album – but surely when one goes to see the MDNA Tour, one listens to the album to familiarise with the tracks that are going to be played – after all this was not a greatest hits tour.

Perhaps this audience felt detached due to the distance from the stage? The video screens were small and as previously mentioned the sound quality was poor – the Murrayfield venue was simply not well-prepared enough to cope with a show of this scale. In comparison, Sir Paul McCartney’s Up and Coming tour at Hampden Park was well equipped with huge screens and a stunning sound system, making even those sat at the back of the stadium feel like part of the show – the same cannot be said for the Edinburgh venue. To further disappoint, Madonna was forced to cut out two tracks (the pulsating I’m Addicted and classic Like A Virgin) from the set list due to a curfew on the stadium.

However, stellar renditions of the guitar-infused, Ray of Light-esque, Turn Up The Radio, the heartbreaking Masterpiece set against a backdrop of clips from the poignant W.E and an unforgettable bus-rooftop set performance of I’m A Sinner – leaving die-hard fans rather happy. Let us not forget her upbeat rendition of Vogue.

Surely all negative responses to the MDNA Tour could have been flipped around by its two song conclusion. The first being a flawless gospel-choir backed performance of Like A Prayer – seeing an audience of 40,000 standing singing alongside the Queen of Pop was awe-inspiring. The show was perfectly rounded off by a fun, colorful performance of Madge’s Celebration.

Madonna’s MDNA Tour did boast solid production values and proved a treat for fans of her new material, but unfortunately technical faults and an unprepared audience (expecting all classic hits) lead to a sense of detachment for part of the show. After a quick Twitter search, all those attacking the naysayers of the show were stood in the Gold Circle by the stage, blissfully unaware of the crowds leaving or the awful sound quality throughout the rest of the stadium.

If you can fill a stadium, you need to make sure those sitting at the back of the venue feel equally involved as those stood by the front of the stage. The MDNA Tour has simply left me sat on the fence, but I do know, I still love Queen Madge.