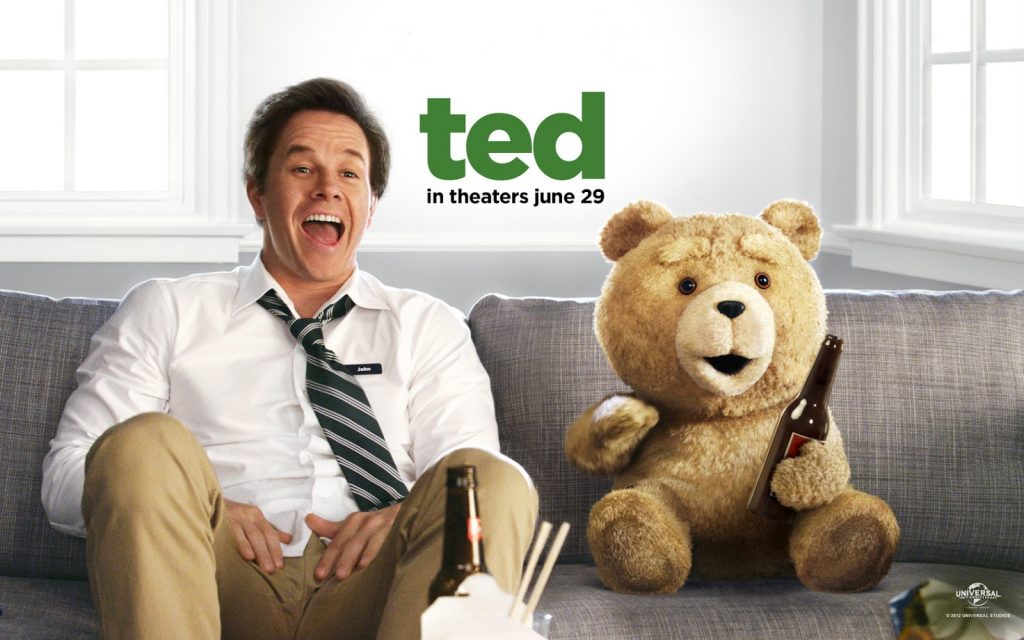 What opens as a whimsical modern day fairy tale soon transpires into a raunchy, R-Rated bromantic comedy. This of course is Ted, the first live action feature from Family Guy and American Dad’s Seth MacFarlane and like these aforementioned shows, Ted is very hit or miss throughout. MacFarlane’s debut is a fusion of inconsistent, unabashed hilarity mixed with some completely forgettable gags – failing to hit a natural balance.

Ted follows John Bennett (Mark Wahlberg), a grown man living with his girlfriend Lori (Mila Kunis) and best friend, Ted (Seth MacFarlane) – a teddy bear, brought to life as a result of a childhood wish. Ted’s outrageous behavior soon leads to John receiving an ultimatum from Lori – either Ted goes or she does.

Whilst the heart of the story (the battle between romance and friendship) is hardly original, MacFarlane brings a sense of animated anarchy to the proceedings that keeps Ted feeling fresh throughout. From musical choices to the structure of the gags – traces of MacFarlane’s animated background are evident from the onset, giving Ted a distinct vibrant style. Despite this fresh approach, the writing style feels inconsistent with jokes ranging occasionally hysterical to downright flat.

This problem seemed to stem from the character of Ted, who is not a particularly funny one. Once the viewer has established that this is simply a bear smoking a bong and saying crude words, after five minutes, the character just becomes dull. Fortunately, MacFarlane’s script comes attacted with a full emotional backbone, allowing the viewer to feel attached to the character – mainly channeled through Mark Wahlberg and Mila Kunis’ solid performances. 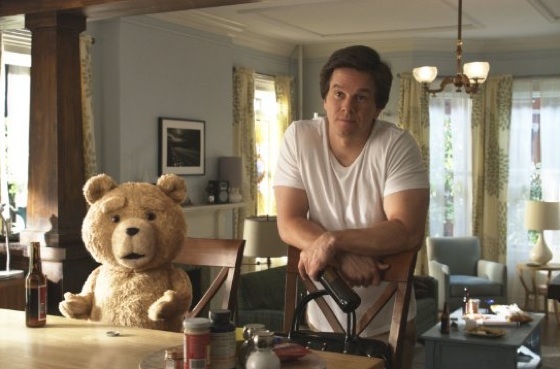 Ted as a character may not be particularly amusing, but the events going on around him are. Highlights include Lori and John trying to remove hooker faeces from their apartment floor and several hilarious cocaine-fueled encounters with Flash Gordon’s Sam Jones. Once again Mark Wahlberg gets a chance to show of his wonderful comic skill and natural charisma in the role of John, whilst also managing to be completely flawless in the more emotional scenes of Ted’s conclusion. Marky Mark once again wholeheartedly commits to the role – getting his ass repeatedly whipped by a TV antenna, dressing as Darth Maul and by singing a tender rendition of Rita Coolidge’s All Time High, all for our entertainment – we could not love him anymore.

Mila Kunis shines – bringing a sense of fun and likeability to what could have been a forgettable role. Outrageous supporting performances from Giovanni Ribisi and Joel McHale inject some madness into the proceedings – where else are you going to see Ribisi dance intensely to Tiffany’s 1987 smash, I Think We’re Alone Now. Joel McHale also continues to excel as one of America’s most likeable comic actors in the role of Lori’s sleazy boss, Rex. Cameos from Ryan Reynolds, Sam Jones, Tom Skerritt and Ted Danson are also great fun. MacFarlane also pens roles for much-loved Family Guy regulars, Alex Borstein and Patrick Warburton.

Ted may not live up to the hype mainly due to its inconsistent balance in writing quality, but MacFarlane does prove to have a promising and unique style as a director. The comic potential in the character of Ted may deteriorate fast, but a phenomenal lead performance from Mark Wahlberg and some fun supporting performances alongside the odd hysterical set piece make Ted completely worth your while.