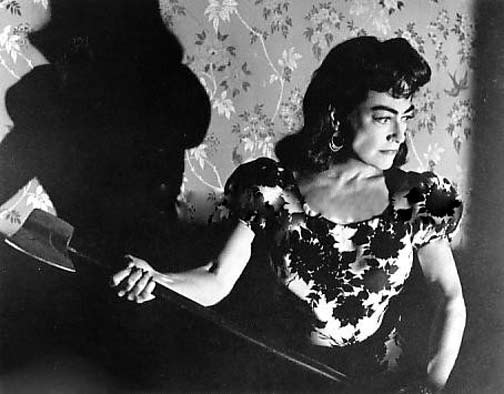 Only having seen Joan Crawford’s earlier work, I recently hunted for a few of her later films, including Whatever Happened to Baby Jane? which I discussed here. I was soon met with the low-budget horror Strait-Jacket which she made in 1964 and what a film it is! This classic, written by Robert Bloch (the man behind Psycho and The Deadly Bees) stars Crawford as Lucy Harbin a woman released back into society after twenty years in an asylum following the brutal murder of her adulterous husband and his lover. Harbin shacks up with her estranged daughter and begins to live a normal life, until heads start to roll again…

Directed by genre-veteran, William Castle, Strait-Jacket fuses elements of psychological terror with old school horror with a nice serving of camp on top (courtesy of Madame Crawford). The opening scene sees some magnificent narration kick in stating “It all started on a hot sticky Saturday night…” whilst the sound of 1940s upbeat jazz plays in the diner where Lucy’s husband picks up his lover, giving the film a real all-American charm as well as a dark film-noir style. The two soon return home, unaware Lucy’s returning too. When we’re first introduced to Crawford’s character in this opening scene, we see the near 60 year old playing a far younger version of herself – which is unintentionally hilarious as Crawford never aged terribly well, so seeing her play far younger looks as awful as it sounds. As expected, Lucy finds the two lovers, but how is she going to react? Will she chuck him out? Will she go stay with friends? No, unexpectedly she grabs the nearest axe and hacks her husband and his floozie to pieces, whilst her young daughter watches and screams. The sheer unexpectedness of this scene is quite frightening and Crawford’s acting makes it mesmerizing and slightly hilarious watching.

Strait Jacket continues in this style throughout with Crawford truly camping it up. For lovers of outrageous trash, this is a must. You can pick it up for a bargain price from here. Here is that awe-inspiring opening below.