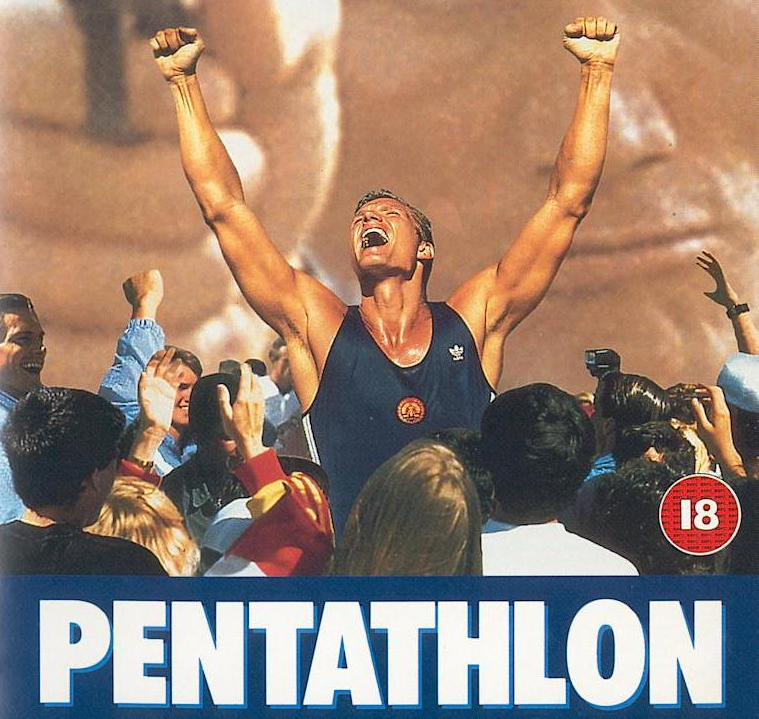 Forget Chariots Of Fire, hell, forget the actual Olympics – the only sporting feature you need to watch this Summer is the recently remastered 1994 action flick, Pentathlon.

After winning the Olympic Gold in Seoul, German pentathlete, Eric Brogar (Dolph Lundgren) goes on the run from his tyrannical neo-Nazi coach, Heinrech Mueller (David Soul). Several years later, Brogar, now working in a grotty Los Angeles cafe decides to get his life back on track and start training again. However, the arrival of Mueller and a group of American neo-Nazi sympathisers resurrects old conflicts.

Pentathalon stands out because it is not your typical nineties action film, the sporting angle taken by Bruce Malmuth’s (Hard To Kill) script proves a fresh and original concept. The focus is less on ass-kicking (although there is still plenty) and more so on the broken athlete Eric Brogar trying to reclaim his former glory. This allows for a glimpse at the little seen, sensitive side of Dolph Lundgren, who proves to be utterly convincing. Let’s face it – Dolph is a man who could do anything and Olympic pentathlete is just another of his many talents.

There is something completely watchable about Pentathalon – possibly that it keeps its tongue planted firmly in its cheek. The concept of a former Olympic superstar flipping burgers in a meagre local diner says it all. The relationship between Brogar and the owner of the diner (Roger E. Mosley) allows for some comic fun as well with Mosely and Lundgren having a believable and amusing camaraderie.

However, the main fun of Pentathlon is David Soul’s scene stealing performance as sinister sports coach meets Neo-Nazi terrorist, Heinrech Mueller. Seeing the man who patrolled the streets as Hutch or crooned Silver Lady to adoring audiences, as a scheming Nazi makes for an unforgettable watch. Soul spits his words out with angry hatred and commands the screen in this deliciously evil performance – reminiscent of Gregory Peck’s turn in The Boys From Brazil.

Pentathlon was never going to revolutionise the action genre, but it is nonetheless memorable nineties action that proves a thoroughly entertaining way to spend an hour and a half. Lundgren’s pitch-perfect performance alongside David Soul’s over-the-top villain and an original concept makes Pentathlon well worth a watch.

You can buy Pentathlon on Amazon.
Originally written by me for The People’s Movies