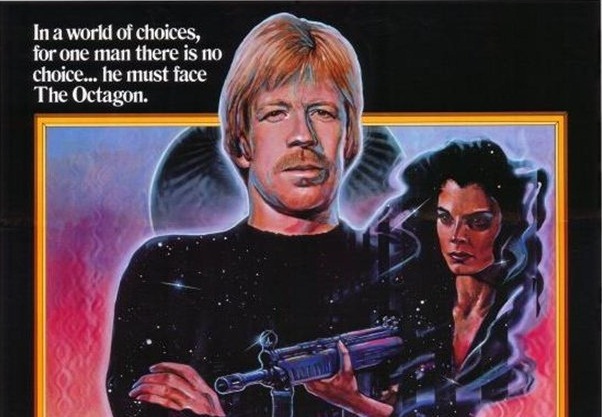 Chuck Norris can do anything: he’s been a Texas Ranger, a Delta Force Major, an Expendable, a New York Cop – but now it is time to see him as a ninja warrior in the remastered edition of 1980 martial arts thriller, The Octagon.

Norris plays Scott James (often pronounced so fast it sounds like Scotch Eggs), a man plagued by nightmares of a mysterious and intense combat training routine that he and his best friend received as youths. Scott is dragged back into this former life when a terrorist organisation (known as The Octagon) lead by deadly ninjas, starts making strikes towards him and those he cares for.

The Octagon is filled with kitsch appeal – for example, for the most part of the film we are given an insight into Scott James’ thoughts, which consists of a whispering Chuck Norris voice-over, whilst the star stares intently on into the distance. This hilarious/creepy/wonderful technique also helps fill in the patchy plot holes that tend to appear, whilst also furthering Chuck’s persona as a ninja master. Very clever. Chuck’s moustache, which we all remember and love from A Force Of One is back, alongside some cringe-worthy dialogue, which adds to the camp charm of The Octagon.

Despite this, The Octagon is a thoroughly watchable film, never becoming tiresome or dull. There may be some questionable elements in Leigh Chapman’s script (see above), but it’s a strong, original concept which hits a perfect balance between espionage-infused thrills and bare-bones martial arts. Eric Karson’s feature does not particularly depend on special effects, but rather on the martial arts skill and precision of leading man, Norris. Like A Force Of One, Chuck’s young brother, Aaron choreographs these brutal fight sequences with a sense of precision and realism.

Norris once again proves to be a highly capable leading actor, excelling in the combat-heavy sequences as well more emotionally based material. Whether he is kicking hissing ninjas in the face or mourning the loss of his best friend, Chuck is a pro. Although, I’m not sure whether even Chuck could convincingly handle the voicing over of his “inner-thoughts”.

Chapman’s script features some entertaining, well-produced action set-pieces from Chuck taking down an entire ninja camp whilst it is in flames to the epic sword fights in The Octagon’s conclusion. A particular favourite scene of mine involved a poisoned Chuck kicking a ninja into a wall of fire. In addition to these action packed spectaculars, The Octagon features well-cast supporting turns from Lee Van Cleef, Art Hindle and Karen Carlson.

Whilst it may appear slightly dated and it does feature some questionable plot devices, The Octagon is a thoroughly entertaining watch. It has been remastered to visual perfection – which exemplifies the well-crafted action sequences and impressive martial arts. Chuck proves that he is the master of the cult action film in this original and likeable combat-thriller.

Originally written by me for The People’s Movies