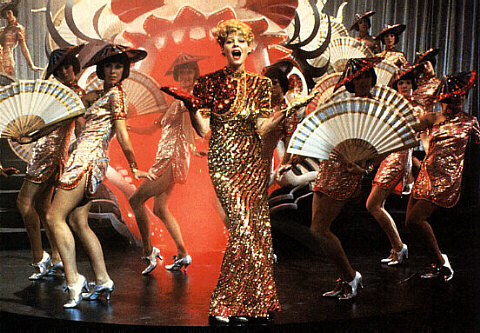 Silver Screen Slags has compiled a list of the 30 ultimate song and dance numbers in film, featuring a vast array of overlooked classics, as well as all time favourites (in no particular order, because we are far too lazy to structure anything properly).

Yes, Christopher Nolan’s Batman may be dark and brooding – but it can never top anything where Jack Nicholson dances to Prince. Never.

Indiana Jones & The Temple Of Doom – Anything Goes
Kate Capshaw

Kate Capshaw has always been our favourite Indy girl, mainly due to this unforgettable introduction to the darkest film in the series. It has showgirls, glitter, high kicks, in a stunning fusion of East meets West.

Hudson may not have the strongest voice, but this has enough Italian charm and style to become completely unforgettable.

John’s had his share of bad press recently, but to us he’s still an icon of cool and this clip is the epitome of that.

Forget the farcical Tim Burton/Johnny Depp version, nothing can beat the classic original. Pure Imagination is iconic and beautiful trip back to the childhood of thousands of people.

Possibly the strangest musical of all time, sees Clint Eastwood and Lee Marvin show off their singing chops. Gold Fever is just a small, fun snapshot of this. It’s worth a watch, out of morbid curiosity.

Sextette – Love Will Keep Us Together
Mae West, Timothy Dalton

Sextette is fascinating. The last film of Queen of Camp, Mae West, sees the then 85 year old amp up her sex-pot image to new extremes. It is a masterpiece of trash. Here we see her seducing her young husband, in the form of Timothy Dalton. Warning – once watched, this can never be unseen.

The Wiz – Ease On Down The Road
Diana Ross, Michael Jackson

Who’d have thought The Wizard Of Oz could get any gayer? Oh, just add Diana Ross. The Wiz is a classic from Sidney Lumet, featuring an all black retelling of the classic tale, alongside a wonderful new soundtrack.

Is Cabaret the greatest musical of all time? Most likely. Liza is truly faultless in this biting, social conscious classic.

Last years Footloose remake proved to be a fun update on the somewhat dated original. The inclusion of some sexy young stars and an up-tempo country number were just some of the highlights.

This nostalgia-infused tale of female identity in 1970s France is a career best for both Depardieu and Deneuve. Seeing the iconic French stars go to a disco and have a little boogie is surely one of the most entertaining dance sequences in recent years.

The film may have been awful, but it did open with this lovely song and dance number featuring some dolphins.

Silver Screen Slags falls into the cult that believes Grease 2 surpasses the original on every level. We’re torn between our love for Dame Newton-John and Queen Michelle Pfeiffer, but we do believe Maxwell Caulfield trumps John Travolta. Anyway, here is the finest musical number from the cult favourite.

We’ve already discussed Richard O’Brien’s stellar Rocky Horror sequel here at length, and we could not possibly leave it out of a list like this. So here, is the frantic, catchy, unforgettable title song – Shock Treatment.

Burlesque – You Haven’t Seen The Last Of Me
Cher

Love At First Bite – I Love The Nightlife
George Hamilton

Unfortunately this cult vampire comedy has been long forgotten, being somewhat difficult to get a hold of. This is perhaps George Hamilton’s finest performance, thanks to this dance scene featuring Alicia Bridges’ I Love The Nightlife.
Sex And The City 2 – Single Ladies
Liza Minnelli

Fortunately, we have not suffered through the hells of Sex and The City 2, but we are quite fond of seeing Liza murdering Beyonce’s Single Ladies. It’s like a beautiful car crash.

Priscilla, Queen Of The Deset – I’ve Been To Paradise
Hugo Weaving

Priscilla brought drag to the mainstream, through director Stephan Elliot’s realistic and fun characters. The opening featuring Hugo Weaving miming to Charlene’s I’ve Been To Paradise, is strangely poignant.

Its mad and unsettling, its Udo Kier dancing with a lamp and singing German techo music. Beware, you may find yourself watching this hypnotic sequence on repeat.

Surely no one expected to see a violent JCVD classic on a list of best dance scenes. Well Kickboxer presents us with an unusual, strangely sexy, dance fight scene. JCVD has moves.

This forgotten slasher features a completely unforgettable turn from Lauren Bacall (who has disowned the film), one of her rare appearances in the horror genre. The veteran actress stars as Hollywood superstar venturing out onto Broadway, unaware of her deranged stalker’s plans. Bacall belts out a touching number called Hearts Not Diamonds, penned by Tim Rice and Marvin Hamlisch.


Rock Of Ages – Any Way You Want It
Mary J. Blige

Rock Of Ages was a fun bit of escapism, but unlikely to be making any best of lists – well apart from this one. Mainly due to Mary J. Blige’s energetic rendition of Journey’s Any Way You Want It. If the film had been this on loop for 90 minutes, we’d have been very happy.

The Return of Captain Invincible – The Alcohol Song
Christopher Lee

Sir Christopher Lee is without doubt a cinematic God. The veteran star has appeared in hundreds of films, television shows and games – showing us there is no end to his many talents – one of which is singing. Enjoy the up-tempo Alcohol Song from little seen superhero movie, The Return Of Captain Invincible.

If Sir Christopher Lee is King of the Screen, then Angie is surely Queen. Beauty and the Beast, Disney’s finest piece of animation is also one of the companies most touching, thanks to Angela Lansbury’s beautiful title track.

Technically not film, but a film is in the works, and that is good enough reason for Walking Down The Road to be included on this list.