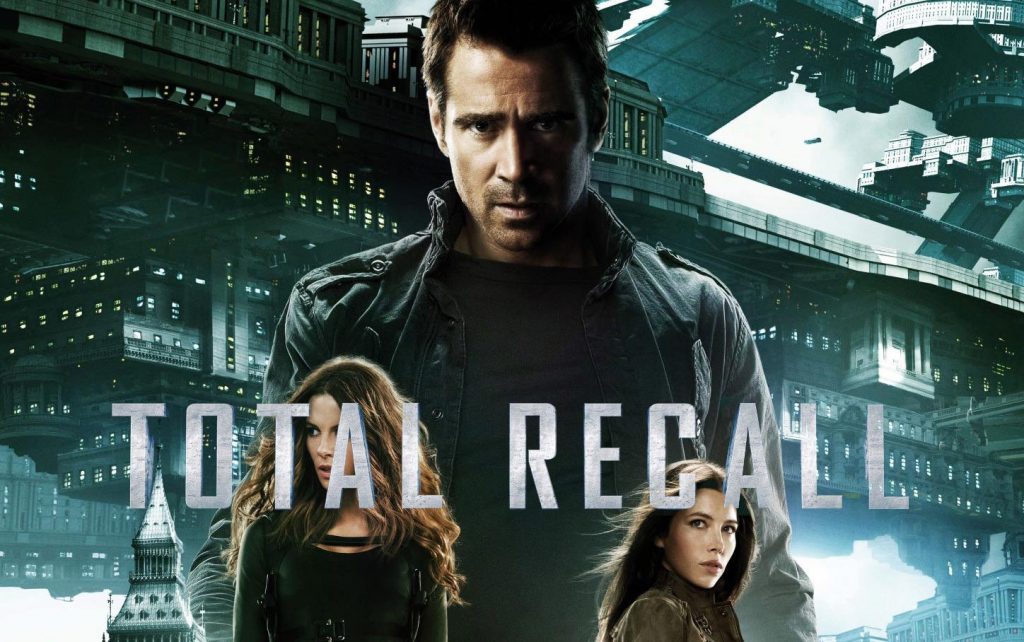 Len Wiseman’s (Underworld, Die Hard 4.0) remake of the 1990 Paul Verhoeven sci-fi classic, Total Recall receives its UK cinema release this week, after already being met with a mixed response overseas. Starring Colin Farrell, Jessica Biel and Kate Beckinsdale, Wiseman’s Total Recall proves to be a competently made sci-fi actioner, despite lacking the originality of its predecessor.

Factory worker, Doug Quaid (Farrell) is thrust into a world of political espionage the result of a botched trip to Rekall – a company that provides customers with supposedly artificial memories. He soon finds himself on the run from Government forces after uncovering  corrupt Chancellor Cohaagen’s (Bryan Cranston) plans to replace human workers with robotic drones.

Despite some clear stylistic influences from Ridley Scott’s Blade Runner, mainly through the setting of the futuristic Chinatown-inspired Colony, Wiseman’s representation of the future lacks a huge amount of originality. What we are provided with is a glossy, personality-free, generic world of sleek chromes and seen it all before gadgets that proves instantly forgettable. However, regardless of these stylistic setbacks, Wiseman’s film truly excels with a barrage of well-crafted action set-pieces – with taut shoot-outs, atmospheric rooftop chases and high speed hover-car pursuits being some of the most exciting. Here Total Recall, displays some slick and polished special effects that prove to be tense, well-directed and highly watchable.

For the most part the narrative elements and thematic ground feel vague – the likes of Cohaagen’s plan to replace the workers, which makes little sense when thought through with Kurt Wimmer and Mark Bomback’s screenplay relying on viewer assumptions that he is simply just an evil politician. Total Recall could have perhaps benefited from a slightly wider backstory, explaining how the world came to be split into two territories. This could also have aided the wider thematic issues like the looks at personal freedom, the power of technology and the growing presence of the state seem sidelined in favour of glossier action set-pieces, which although touched upon, do not feel fleshed out. With this emphasis on action, one would have hoped Total Recall would embrace a more fun, tongue-in-cheek nature, however the remake proves far too serious with the only moments of light relief (and I stress very light) coming from Kate Beckinsdale’s sneering villainess.

Fortunately, a strong cast make us for these narrative disappointments, in particular a stellar leading turn from Colin Farrell. The Irish actor makes a welcome return to a solid, action-focused role – proving to be both physically and emotionally convincing. As well as being at a physical peak, Farrell captures the sense of confusion and frenzied panic faced by Quaid as he fights to gradually uncover his identity. Jessica Biel also fits into an action-based role as Melina, a rebel Lieutenant who aids Quaid – she physically convinces, as well as showing a natural on-screen chemistry with Farrell. However, it is Kate Beckinsdale’s icy supporting turn that dominates the screen with the actress bring a sinister charm to the proceedings. Breaking Bad’s Bryan Cranston also proves to be one of Total Recall’s chief scene-stealers as the malevolent Chancellor.

Total Recall may be lacking stylistically and thematically but Len Wiseman has presented us with an incredibly slick, competently made piece of action-packed sci-fi. A stellar turn from Colin Farrell, succeeds in bringing a more human side to this special effects heavy remake.